The Next Chapter: Ibeyi On Opening Up Towards The World

A few years ago, I met the French-Cuban duo Ibeyi in a tiny hotel room in Berlin while they were touring with Chet Faker around Europe. Things were just starting to get really busy for the twin sisters Lisa-Kaindé and Naomi Díaz back then. Their self-titled debut album was about to be released and a lot of excitement was up in the air.

Two and a half years later, we meet again to discuss all the buzz that has been going on ever since and, most importantly, the release of their follow-up called Ash. While Ibeyi was very much an instrospective work of art for the two creative minds, Ash tends to open up a lot more sonically and lyrically.

A lot of people in their early twenties still feel a bit lost when it comes to deciding what they should do with their lives. Ibeyi, however, have always seemed very ambitious and focused from the beginning. It’s easy to tell that music has been their passion for a long time, growing up in a musically nurturing home.

It only took a month after they had finished their lengthy tour that Ibeyi felt ready to go back into the studio again to work on their fresh ideas. While the process of making a record may be tiring sometimes, it gave the sisters a great deal of energy that was still visible during our conversation. Lisa-Kaindé remembers this particular time well saying: ‘We were looking forward to going back into the studio. All the energy that is there when you are creating something. Our producer Richard (Russell) is amazing. Being with him and Naomi in the studio, the three of us together, doing this album was very exciting. It’s a strong album for us. They say the second album is the most complicated one, people crush and they don’t find anything they can talk about, but actually we found pretty amazing things to talk about.’

Being in the studio again for weeks was an experience the two siblings cherish very much. Most of all because of all the positive energy they were surrounded by: ‘Making this album was full of enjoyable moments. That feeling that you’re at the right place in the right moment. And this constant feeling that this is what you are supposed to do. There’s no day when you wake up and feel like you don’t want to go. In normal life you might have these days where you wake up and feel tired because you have so many things to do, but it’s never like that for us when we go into the studio. We are always happy to go back’, says Lisa-Kaindé.

The duo only spent little time with their family back in Cuba before feeling the urge to hit the studio again. You won’t catch IBEYI being unprepared when you work with them. As soon as they got back together with their producer and XL Recordings founder RICHARD RUSSEL, they had plenty of song ideas in the pipeline. Lisa-Kaindé couldn’t imagine it being any other way: ‘We arrived in the studio with lot’s of material. You know, some people go into the studio and they don’t have any songs, but we got there with around 30 songs. We had a lot of material to work with. We had songs, textures and ideas!’

‘We knew that we wanted to make a more uptempo album and we were also hoping to have some collaborations on there. We couldn’t imagine going to the studio not knowing what we were about to do in there.  It’s better if you are prepared and know what you’re doing.’ (Naomi Díaz) 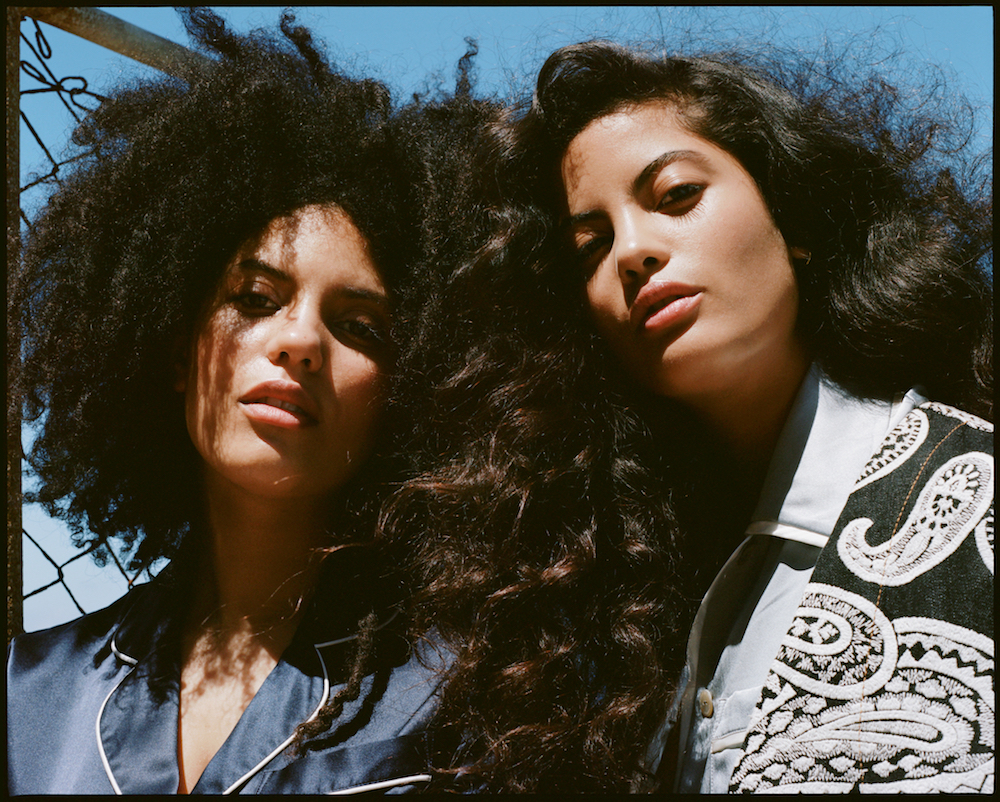 While some songwriters wait for inspiration to hit them or a muse to come around, Lisa-Kaindé considers songwriting a daily craft: ‘I already have songs for the third album. Songwriting is something that’s part of my everyday life. It’s really important to me. The problem is, when you are touring a lot, like we did for about two years, and you go back into the studio a month after that – you can’t write 30 songs in a month. Some people are geniuses, but I can’t write that many songs in such a short amount of time that I really like. If I did that, half of the songs would be awful. Some songs happen quickly, but the majority of them takes more time and you need to work hard until you have polished them.’

Having toured all around the world with their debut album, Ibeyi are eager to ‘touch more people, tour more and hopefully collaborate with more with other artists as well’, Lisa-Kaindé tells us with great excitement in her voice while adding: ‘Being in front of so many people for two years every night made us realize that we were growing a little bit every day. When you’re singing, give your best, you’re present and make people forget about their everyday life and even make them hopeful, that is the main thing. We always wanted our music to have layers. We want to have diversity and put surprises in there.’

Speaking of collaborations, there are quite a few terrific ones on Ash that Ibeyi share with us now. Like Deathless with Kamasi Washington, When Will I Learn featuring Chilly Gonzales or a sample of one of Michelle Obama’s speeches in No Man Is Big Enough For My Arms. Despite having a number of well-known artists on their record, it never overshadows their own achievements or feels like a helpless moment where they had to add something extra to their music which Lisa-Kaindé confirms: ‘When you try to too hard to make others add something to your album then you lose that organic thing. It has to be the right song, too. It was cool because we only sent one song to Kamasi, one song to Meshell and so on. A few more ideas to Chilly because he was the only one being in the studio with us. We thought it was important that we didn’t make them play on everything. Actually, the songs called for them. It was so important for us that we would totally embrace each other.’

One of the main topics that keeps popping up on Ash in various forms is injustice. All the pain related to it almost made Ibeyi feel numb until they learnt one important lesson on their way of dealing with it: ‘Injustice is probably one of the biggest problems of the world and my biggest pain of the past few years’, Lisa-Kaindé tells us, ‘Seeing it just everywhere and not being able to do anything about it. I would just cry and be angry. Very slowly I realized that I felt so frustrated because I was trying to save the whole world. You can’t save the whole world, though. Especially not if you have huge problems like racism in front of you. But then I realized that I could do something. This is what changed everything. Because ‘Ash’ is something.

Nodding her head, her sister Naomi points out: ‘I think you have to be prepared to talk about all these subjects we’re addressing. Some people may not talk about things like that because they don’t feel ready or prepared. We have been talking privately about these kind of subjects for a long time though. Now we do it publicly as well.’

It’s not about the big change for Ibeyi, but about the individual step we can all take as members of society, no matter where we live, Lisa-Kaindé adds: ‘Even if it’s not changing the world like that it still means something. To activate people around us. Switching ourselves on most importantly. It took time for us to get to this point where we felt ready to do that. On the first album, we presented ourselves to the world and we were still really young so it took time. Sometimes you get to meet amazing human beings that are actually doing something. That are fighting for your rights and a better world. That keeps you hopeful, too. Seeing all these amazing souls out there who are doing so much.’