Dana Margolin is on her third coffee when I step into the brightly lit quarters of the Secretly Canadian Music Group Berlin. The artist and frontwoman of Porridge Radio has just gotten off a flight from New York, where she’s been through a promotion tour of the forthcoming sophomore record, Every Bad, of the band. Porridge Radio started out as a bedroom solo project by the singer but took on full-fleshed forms with the four-piece band Dana Margolin gathered around her. On her side are Georgie Stott on the keys, bass guitarist Maddie Ryall and drummer Sam Yardley. ‘I do write all the songs solo, so it is quite fun to sometimes do a solo performance. It is a different experience’, she tells me about the radio sessions she did on guitar in the States. Lounging back in the bean bag chair, the brownish-green eyes of the artist sparkle regardless the lack of sleep. 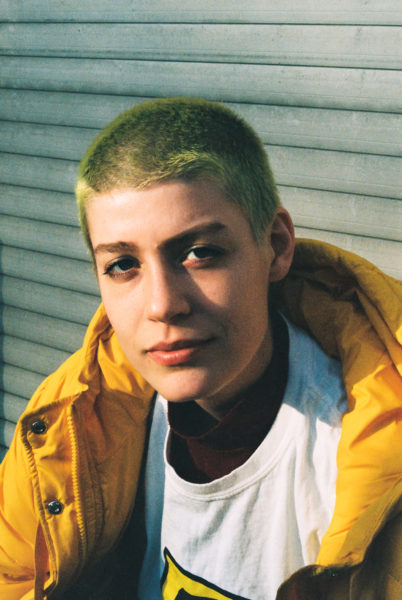 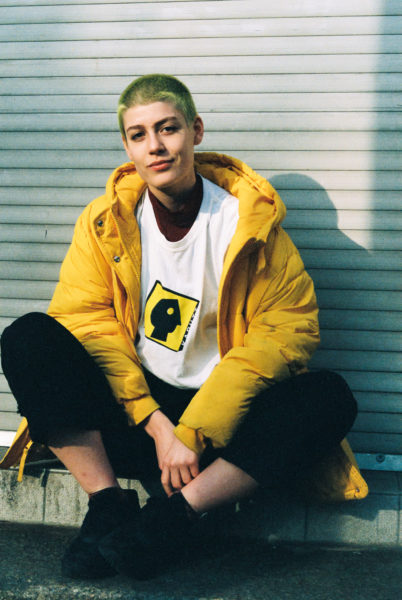 From the bedroom to the studio

‘I am immune to the stuff’, she laughs off her coffee addiction and strokes her neon green buzz cut. Matching the bright color, Dana is sporting a bright yellow jacket and a band shirt from a fellow UK-based band. The jetlag is clearly still nagging on her, but she lounges in the comfortable bag and patiently picks her brain to answer my questions. ‘I love the fact that I can bring my material to them,’ she tells me about the band’s collaboration process. ‘I always write the outlines, but they fill it in with so many new ideas.’

‘My bandmates are all amazing musicians and people that I can be honest and vulnerable around. I can show them stuff I have not showed anyone and sometimes one of them will say the one thing that makes the song whole.’

To not get stuck in the tunnel vision one often has to face when personally involved into a creative project, Dana opens up completely to her bandmates. ‘It is a great feeling when they add something to my songs because it shows that they really understand what I want to achieve. They click with it and it is quite magical to do that together – to reach the same emotional state through songs.’ The four musicians met in their hometown of Brighton (not to be confused with Bristol) and started out making music together. The small town on the southern shore of the island, is where Dana feels the most at home as she has not warmed up to her new home in London.

‘I do not like living in London. In Brighton, Maddie the bass player and I lived together just a short walk from the beach. I love the beach.’

Take me to the seaside

The sea is what Dana missed most about her former hometown of Brighton. ‘Staring out at the ocean brings you back down to earth. It reminds you how small you really are.’ Just looking out at the horizon was where the singer often round solace and inspiration in – one thing the capital cannot offer. We probably all know the feeling of gazing into the waves and letting your eyes and mind be transported to the point where water fades to mist and the sea meets the sky. There is just something incredibly moving about staring out into the distance.

‘I used to go down to the ocean often. On a rough day it is absolutely terrifying – if I swim out there I’d die – and then on a calm day the ocean is the most peaceful thing. It reminds you that you are human, that you are a physical body and so vulnerable. Whenever I am by the sea, I realize that I am just this tiny thing and so fragile,’ Dana goes on philosophizing about the existential questions that come to mind when confronted with the grandeur of the world and nature. This existentialistic tendency also shines through her songwriting. The singer repeats her mantras on the chorus until they become detached from the works and turn into emotions.

‘The water is so dark that you can’t feel your heart as it sinks.’ 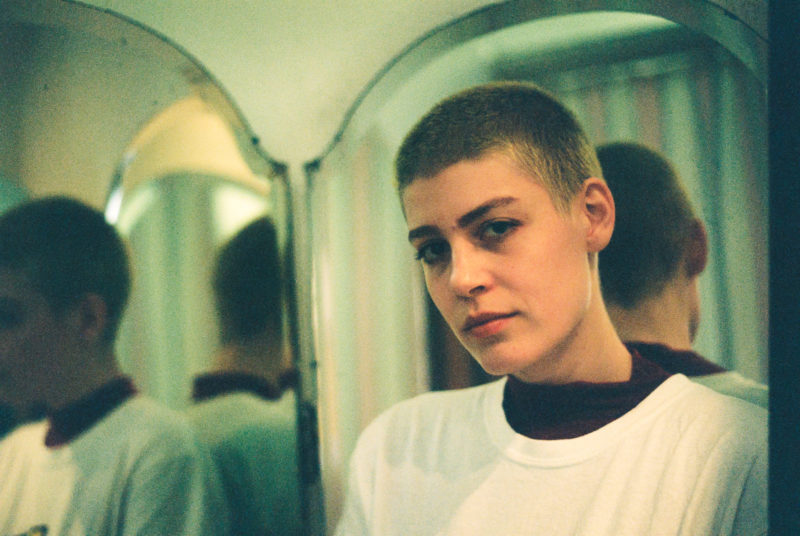 ‘I always loved singing, but I don’t think I could sing,’ Dana laughs when I ask about her unique vocal style. In almost erratic manner the singer shouts out her vocals, giving the songs a special raw and personal touch. ‘I never paid attention to singing in a certain tune. In that way I guess I am lucky because by now I have learned how to sing by simply going for it.’ Learning by doing done at its best, Dana proves. Even though it was never her intention to learn how to sing in tune, as she likes bands led by people who cannot sing, she managed to hit just the golden middle ground.

‘It is often a man-thing,’ she adds when we speak about her singing. And she is right, the raw energetic howls coming from an untamed voice are often associated with male timbers. This makes Dana Margolin’s performance even more special. Her essential and primal shouts of the repetitive mantras truly go underneath the skin. If you cannot scream it, it does not matter, seems to be the motto.

The repeated mantra-like choruses usually stem from the artist’s personal doubts and questions she sees herself faced with over and over again. ‘I use writing songs as a way of figuring myself out. The repetition of things comes out of be going like, what the fuck am I feeling. When I ask myself what these feelings are and how to process them, it creates the repetitiveness.’ Through her style, she detaches the lines from what we think they might mean. There are a hundred different ways of understanding a feeling or a line, she explains. This multi-dimensional understanding of emotion is inherent to the music of Porridge Radio. ‘Like that you can hear something and apply your own personal experiences to it.’ Watching her emotions resonate on other levels with the listeners through the performance, is something that holds special meaning to Dana.

‘I have always wanted to just scream things out’

For the artist, figuring herself out through music gives the songs cathartic vibes. And this can be heard on each of the tracks on the forthcoming Porridge Radio release. The inspiration for her cathartic vocals, the singer also finds in listening to other artists having the same experience. ‘It does feel cathartic too when I listen to other people’s music but the main way for me to feel this is through singing myself. I love listening to people have these moments of emotion because I know what they feel like. When you hear someone else’s music and they open up it makes you open up, too. That’s what I love about music. I want to be vulnerable and connect people that way.’

‘I don’t want us to get bitter, I want us to get better’ Dana howls on the single Lilac. She pushes her raspy voice to reach the rawest of pitches, where vocals turn into shouts and words turn into emotions. ‘I named the song lilac because it was just what it felt like. Colors are a way of expressing emotions in a way words often fail to do.’ Through titling the track after the color, Dana avoids giving it any prescribed meaning. ‘I didn’t want to attach any specific imagery to the song and like this, things are open for interpretation. It is about keeping the balance between sharing your feelings and not over-explaining the music so that people can connect to it personally.’

Carving out a personal space

By not giving her songs distinct titles, she leaves room for interpretation while allowing to hold back just a little bit of the personal messages exclusively for herself. There will always be things that people interpret in different ways and no one will ever see or hear the exact same things in art as you. This way, Dana sneaks her way past the horrifying part of releasing music, which is opening up not only to friends but to the entire world. ‘There will always be parts that only you understand even when you put out written things. I will always have my personal way of interpretation in my heart. You have to carve out you own personal space. It is yours and no one else can reach it.’

‘I have to retain a few things and create boundaries. Especially because the style of writing that I have is very personal, having that boundaries is very important. Finding the balance and maintaining it is something that I am still figuring out.’ 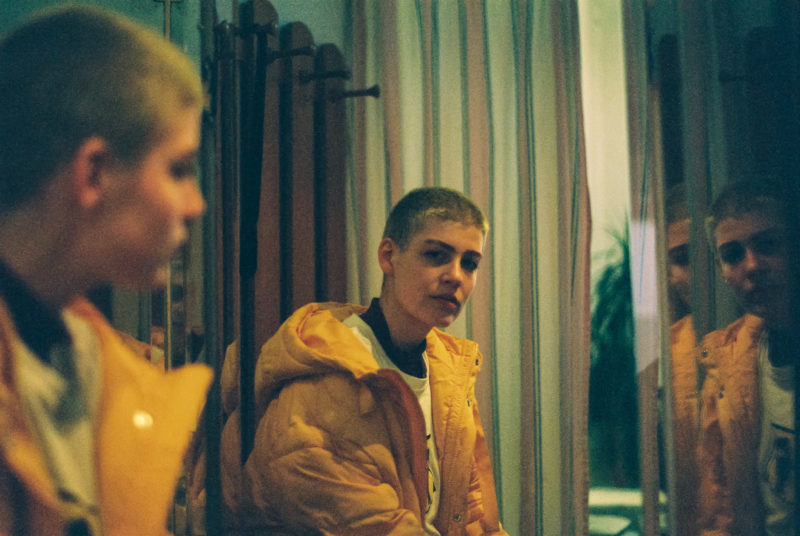 Every Bad, hits the mark with extremely personal songs. Dana is not only singing straight out of her heart but also speaking the hearts and minds of the listeners. Accompanied by the dynamic and wild indie rock compositions of the musicians she surrounds herself with, the record is a hard hitting, untamed and mostly fun ride. Between deep personal lyrics and thundering guitars and drums, Porridge Radio cement their status as a very promising band. Raw unpolished and so utterly human, that when Dana’s voice breaks into loud howls, her vocals reach straight down into the soul of the listener. I cannot wait to see what else the quartet has planned for the future.

But before we get ahead of ourselves, let’s enjoy Every Bad and the upcoming extended tour that will take the band around Europe. For those who want the real Porridge Radio experience, here is the way Dana Margolin likes to eat her Porridge. ‘I forget that Porridge is a thing’, the singer laughs when I ask her for her personal favorite way to have the oats. She looks up at the ceiling, and seemingly has a harder time answering my last question than any of the other ones regarding her music and personal style. ‘There are so many ways to have it. I don’t think there is a right one. But if I were to recommend something; have it hot with non-dairy milk, some frozen fruit, a pinch of salt and I sometimes even add peanut butter to it. It gets so thick and beautiful.’

Here you go, now you can listen to the music with the exclusive Porridge Radio approved way to have Porridge!

Every Bad is out now via Secretly Canadian.

All Photos by Liv Toerkell