Music Under The Mountains: Backstage At The 2017 Vill Vill Vest

I’ve just turned off the microphone in the dining room of the Grand Hotel Terminus in Bergen after an interview with Closing Eyes, and an old gent walks up to us. ‘Are you in a band?‘ he asks. ‘There are always bands here, I can’t come here anymore with there being bands here…’. He’s right about two things: Closing Eyes really are a band, and the Terminus and Bergen itself are overflowing with bands and musicians. We spent the weekend there for Vill Vill Vest festival, Bergen’s Norwegian showcase and conference festival, and rolled in and out of the city’s cafes, hotels, bars and venues to catch up with some of Norway’s best new artists. 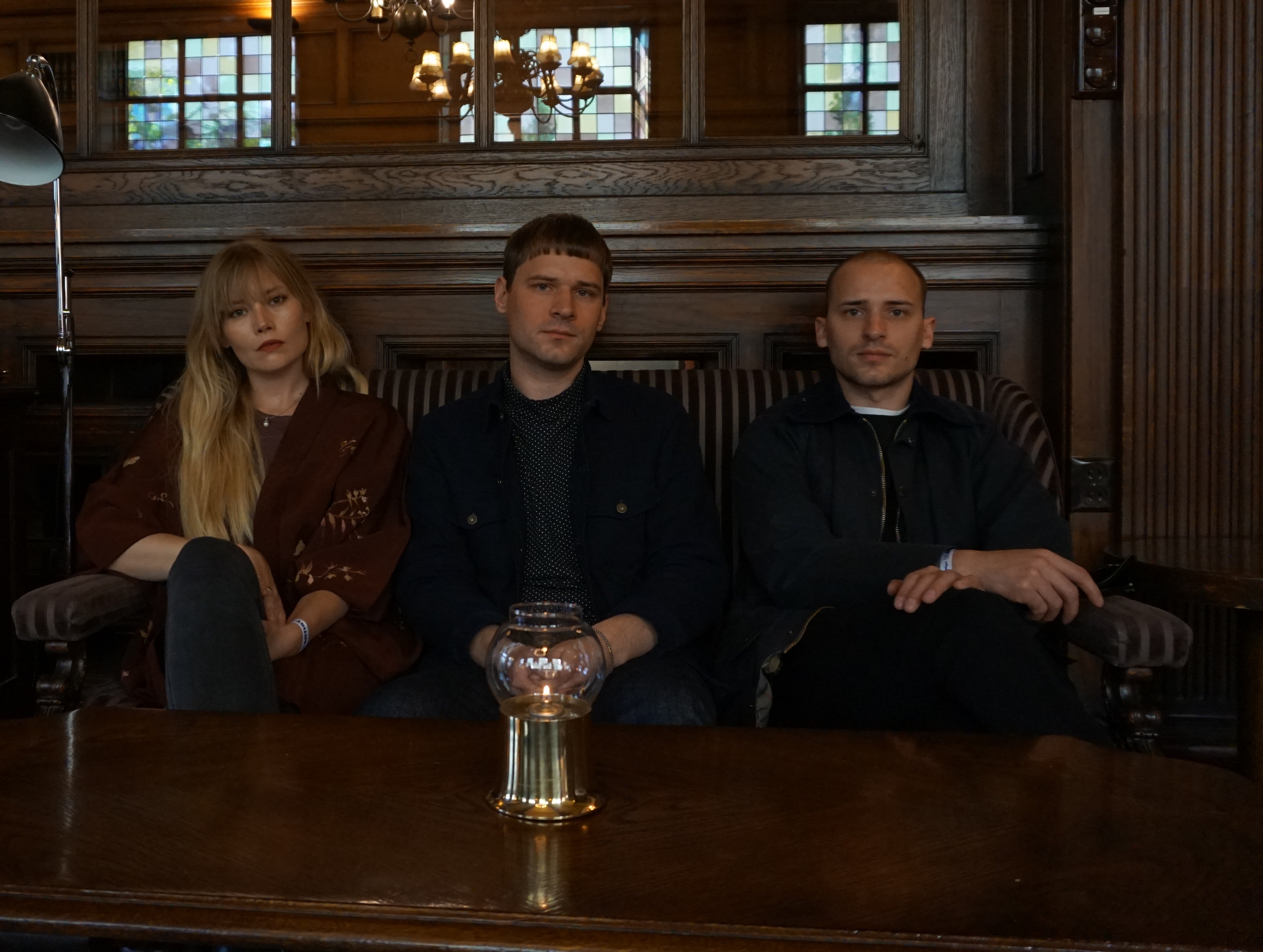 So, Closing Eyes started off as your solo project, at what point did you develop it into a full band?

Eirik: Well that was a gradual thing, because I finished the EP [2014’s Melodies For The Contemporary Mind] and thought ‘Oh, I have to play it live’. I tried to do it alone, but that was boring for the listener. It was boring for me as well because I had to be in control of so much, and sing. So I thought I needed some people to play with. And Emilie sang on the EP, and then joined in on keyboards and vocals, and Magnus joined in on guitars. Then we played some shows as a trio, and Emil joined us on drums, and I realised ‘God damn, it’s fun to play in a band again!’ So it was basically like that, because it’s so much more fun to play with people than to play with loops and backing tracks.

Your debut album Soft Years is going to land in 2018 right? So tell us about that.

Eirik: I think it’s kind of a weird album.

You’ve got Bambole and Close To Me so far.

Eirik: And Sunshiner dropped on Friday. I think we’re going to release one more single. It’s cool when bands make albums that are very coherent, but I often get that feeling that [one song] is the best song, and the others are not that good.

You mean lesser versions of the same song?

Eirik: Yeah. And it’s cool when someone really pulls that off, but it’s kind of rare when that happens, and I’m too kind of all over the place listening-wise to focus on one thing. So when I listen to it [the album], to me it’s very diverse. The hardest part was pulling it all together at the end. I guess to anybody else it just sounds like one band, but in my head it’s all over the place. So the hardest part was pulling it all together. And we recorded it in four stretches, and the final songs weren’t written when the first songs were done. We recorded a few songs and mixed them and then waited a couple of months. And then the same thing. And I listen to everything. So the hardest thing was to make it all sound like one band. But people listen to Spotify playlists, and I don’t think people, or at least I don’t, care about super-coherent albums as much as they did when I was a teenager. I hope there’s something to draw in everyone. And if it feels like the mood changes a lot, I like that.

Eirik: I’m probably exaggerating like crazy! But I had no idea Soft Years was a term. I googled it, and I got all these diaper ads and stuff! It’s a term for infancy years. And I thought that was kind of cool, because it was when we sort of found our way as a band. It took two years from when we started to writing to the final mix, so Soft Years was perfect! But I had no idea when I came up with the title. 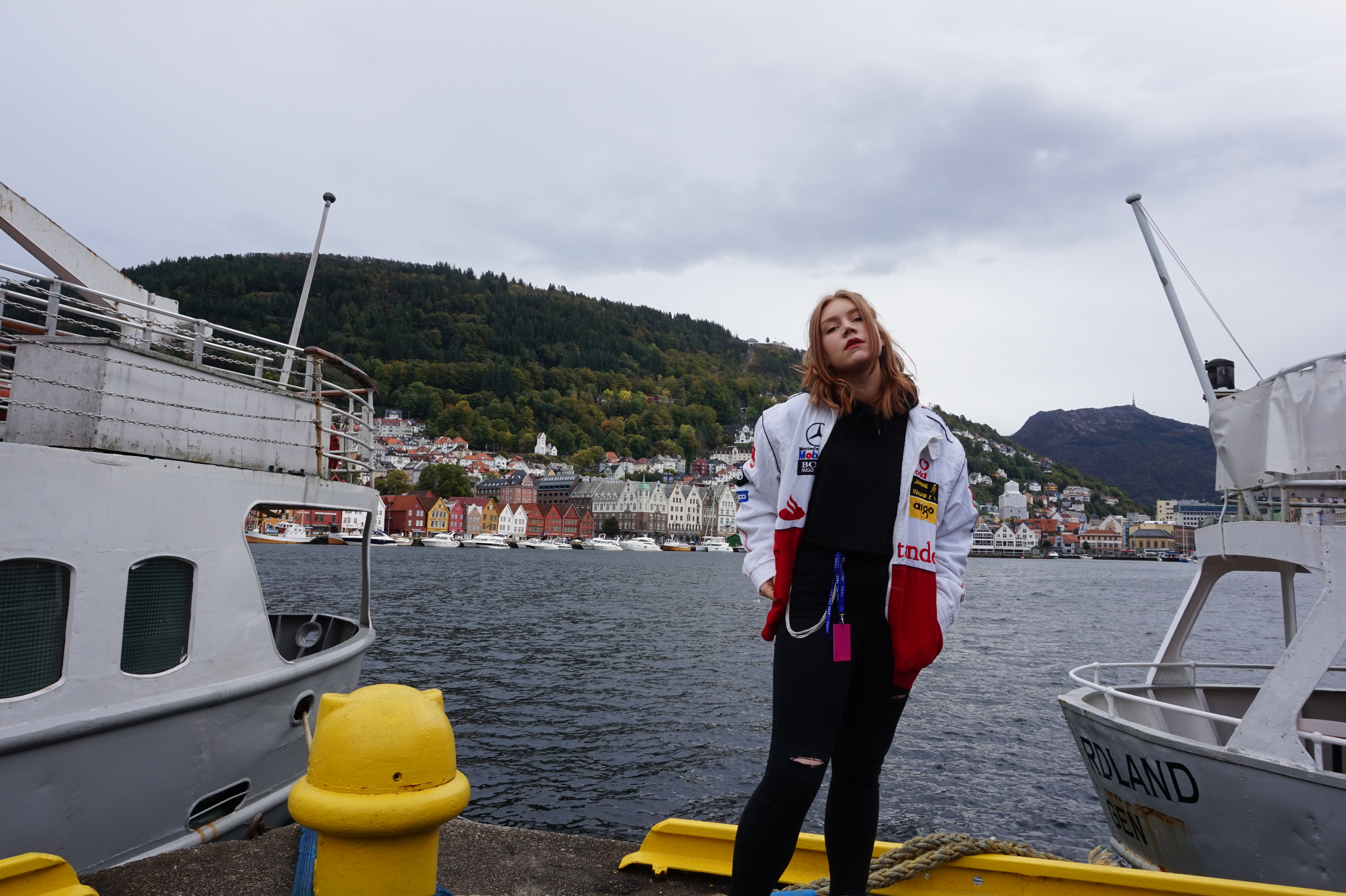 So, you played yesterday, how was it?

Is that the best review you can get, people dancing?

So your last single was The City, can you tell us a bit about that?

Yeah! I wrote it in Oslo, in the middle of the city. It was a really good moment, just before the sun goes up. It was so pretty, and there was a really lovely vibe. I was really inspired by the city, and the sun coming up. It also reminded me of moving to Oslo, and starting to work with music full-time. It’s about being gutsy, just doing it.

It’s quite vocally minimalistic, on the chorus and the verses, you leave a lot of space there for the song for the song to breathe. Is that a style of writing you like?

Yeah, I love it. But I also do the opposite sometimes. I like to mix styles.

Three singles out at this point. What’s the next step?

I’ve bringing out another single before Christmas, and playing more shows. I’ve been writing a lot, and trying out new things, travelling a lot. I really want to do an album one day, so I’ve been collecting songs for that. 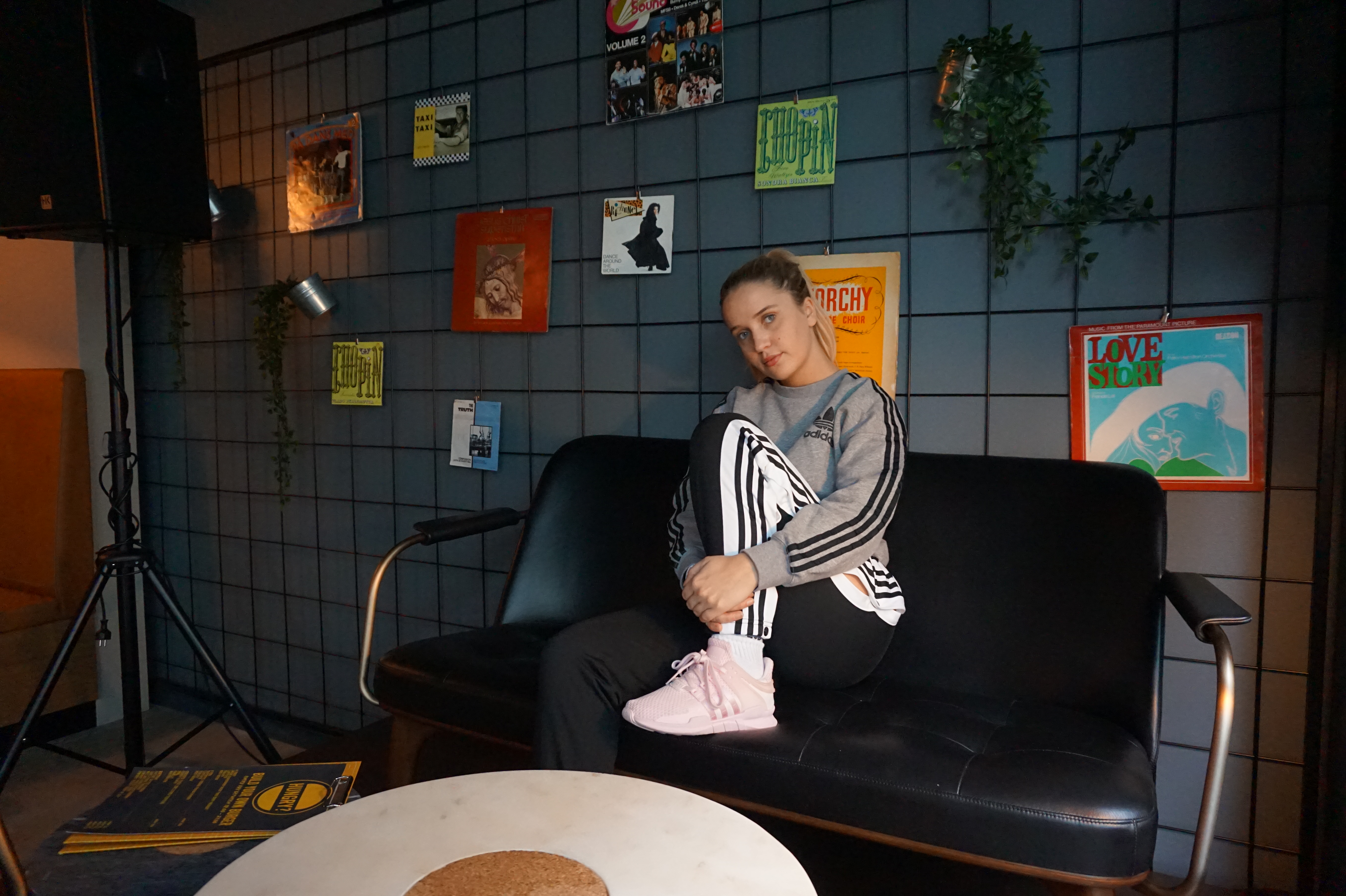 So let’s go, how was the show yesterday?

It was good. I’m really happy with it. It was my first time in Bergen, my fourth show ever. I did Slottsfjell this summer, which was amazing. I feel like I’m figuring the live stuff out, and I feel like yesterday was one of the best shows we’ve ever done. I think I grow a lot each show, so from the first one to this one, there’s been a huge change. My first show was in London, at Hoxton, and I was just concentrating on singing, I didn’t move almost. But now I can get a bit looser, and have some energy onstage.

Not A Toy came out two weeks ago, tell us about that?

It’s been really fun. I’m really happy, I have an EP on the way and I’m excited about getting that out, excited for everything that’s coming out. There’s another song, $$$, it’s the one I finished the show with yesterday, it’s also super dope. I’ve only released Kids before this, and since that it’s been ten months, ten months of hiding sort of, when you don’t get to show what you’re doing, you’re just in the studio making it. And when you’re in that space, it’s only you making the music, you kind of lose a grip on how good it is, because you’re so close to it. And now I kind of feel a bit naked [that the music is out there], because I write all my own stuff. But I’m really proud, and I love the song, and no matter how it goes with it, I’m super proud of it [Not A Toy]. It’s a cool fuccboi anthem, haha!

Does it feel really cool, after working on something for so long, and only having that one single Kids, to then go here’s the rest?

Yeah, it’s scary. When I released Kids, I did that on my own. I had no management, I had no one, I just did everything I could and released it on my own. Now there’s all these people [involved], and it’s so much more serious. I hadn’t written that much music before January this year, when I started intensely working on the album and the EP. So it’s been kind of me figuring out how to write songs, and it’s been the best thing ever, so inspiring. But now it’s coming out, and I’m like ‘Shit, what if it’s awful?’ [laughs]. You don’t know, you never know. You never know how people are going to react. A lot of my songs are a bit provocative, I have lyrics that are, I don’t know, dirty maybe. And it’s not that normal for a female pop artist to open her song her song with ‘back at it again, where are my pants?’. But I’m excited, I’m super, super excited, really really proud. [With lyrics], I have this I-don’t-give-a-fuck attitude towards it, because it’s the way I write. I like it to be a bit fun, and you have to be honest with yourself. I think the thing with girls, these pretty girls who don’t do anything, ‘we’re so cute’, I think that’s bullshit. Let’s be real, girls are different from boys, and it’s fine. 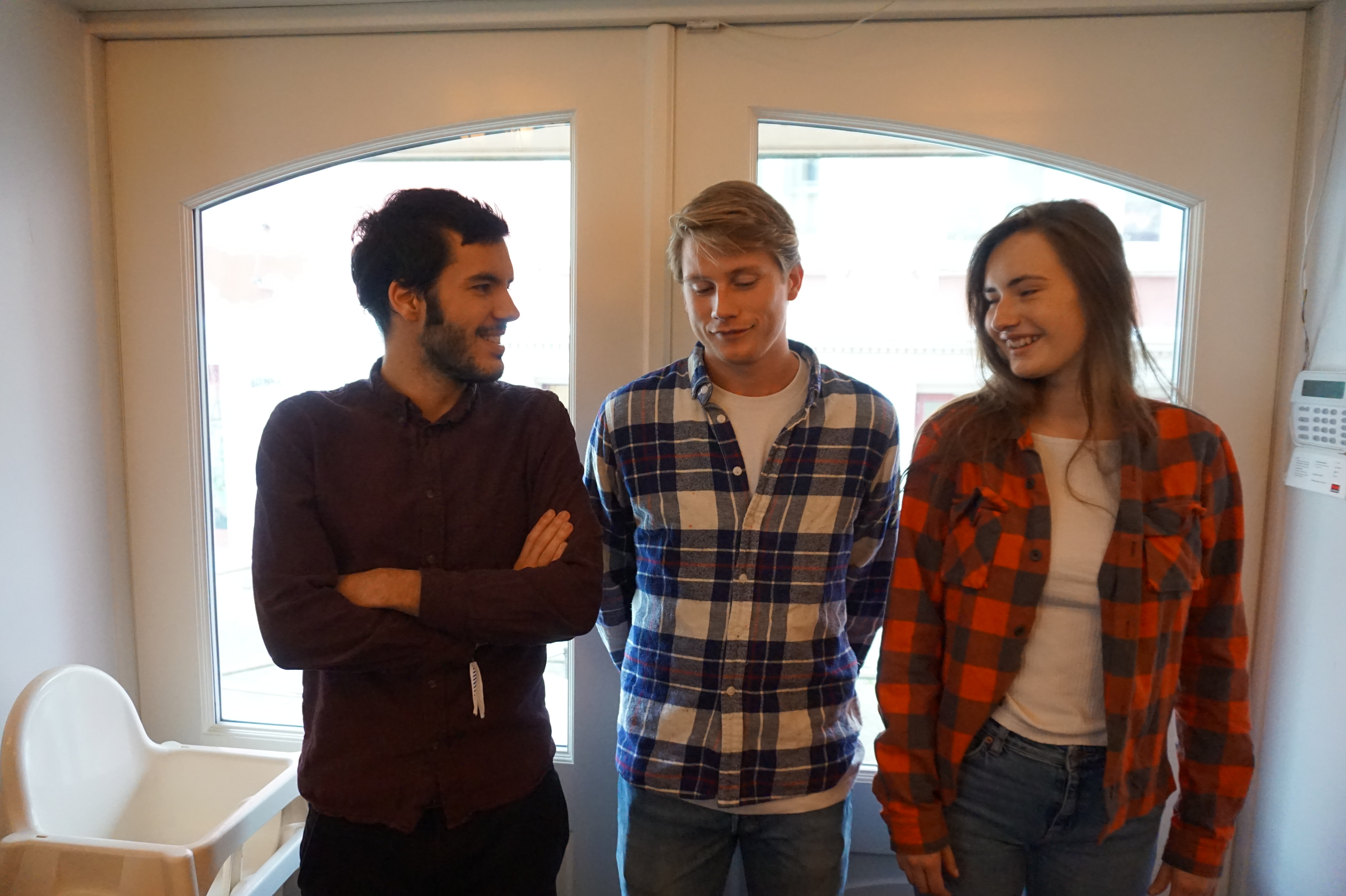 So how did it go yesterday?

Lucas: It went pretty well, it was a flawless concert [laughs]. We played without making mistakes, so that was good. The crowd was good as well, a good atmosphere. Can’t ask for more.

Sturla: Yeah, people were really getting into the vibe. It was Hulen, a perfect venue. We’re slowly built up a set that makes people dance, that pushed them towards it.

Lucas: The whole goal is to get people to dance. As long as people are dancing you’re doing a good job, that’s how I measure it at least in my head, the live part.

Is it cool to be doing a hometown show as well? A home town show, but with lots of international visitors?

Lucas: That’s true, it’s a unique experience to play at home, but in a new way. When you play at home it’s often the same, but at a festival like this you get to play for people that might not have heard you, so yeah, it’s a cool experience.

So, EP came out last year, two singles this year with Path released in June. What are you working on now?

Lucas: There’s a single coming out really soon, first half of October, called Calyx. Both Path and Calyx are from the album we recorded this spring, which we’re still mixing, and as soon as that’s ready it’ll probably be out early next year.

Sturla: We have the album name ready and the art. There are so many cool songs on the album, it’s going to be so much fun to show people.

Apart from new single, what’s happened over the next few months?

Lucas: We have a show at Sørveiv Festival in Kristiansand, and the Trondheim Calling in February. Hopefully conquering the world, the usual.

Thanks to all the bands, and everyone at Vill Vill Vest and Bergen

All Photos by Austin Maloney