The good thing about Düsseldorf is that the festival season almost never comes to an end. Until December, a good number of events such as the New Fall Festival, the digital music and arti festival die digitale and Lieblingsplatte Festival letting artists perform whole records attracts hundreds of pop culture enthusiasts to visit the city.

This year, I attended the New Fall Festival for the third time and find that the festival still lives up to its motto beautiful music, beautiful places. In this article, I’d like to share my five faourite concerts at this year’s edition of the autumnal festival. 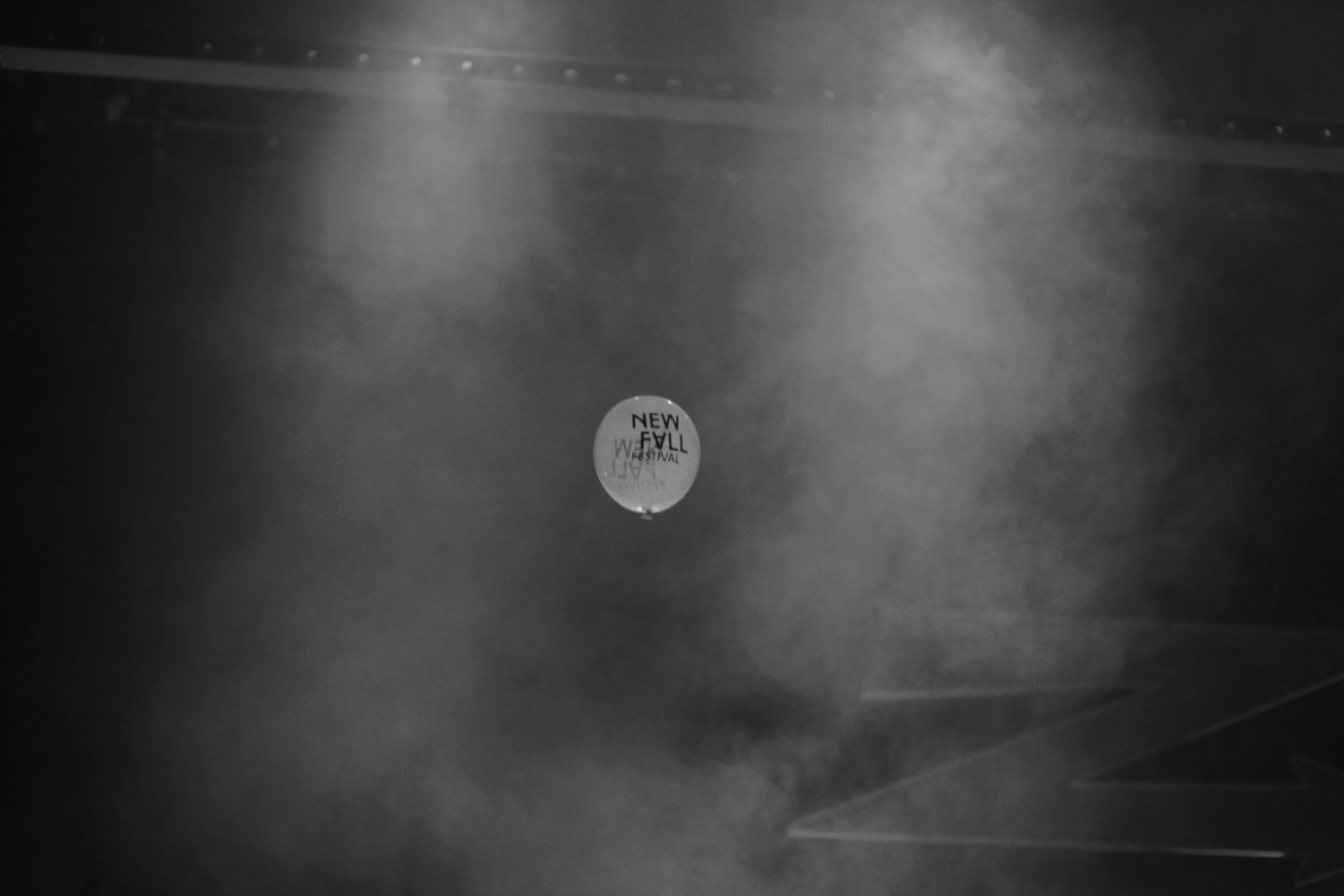 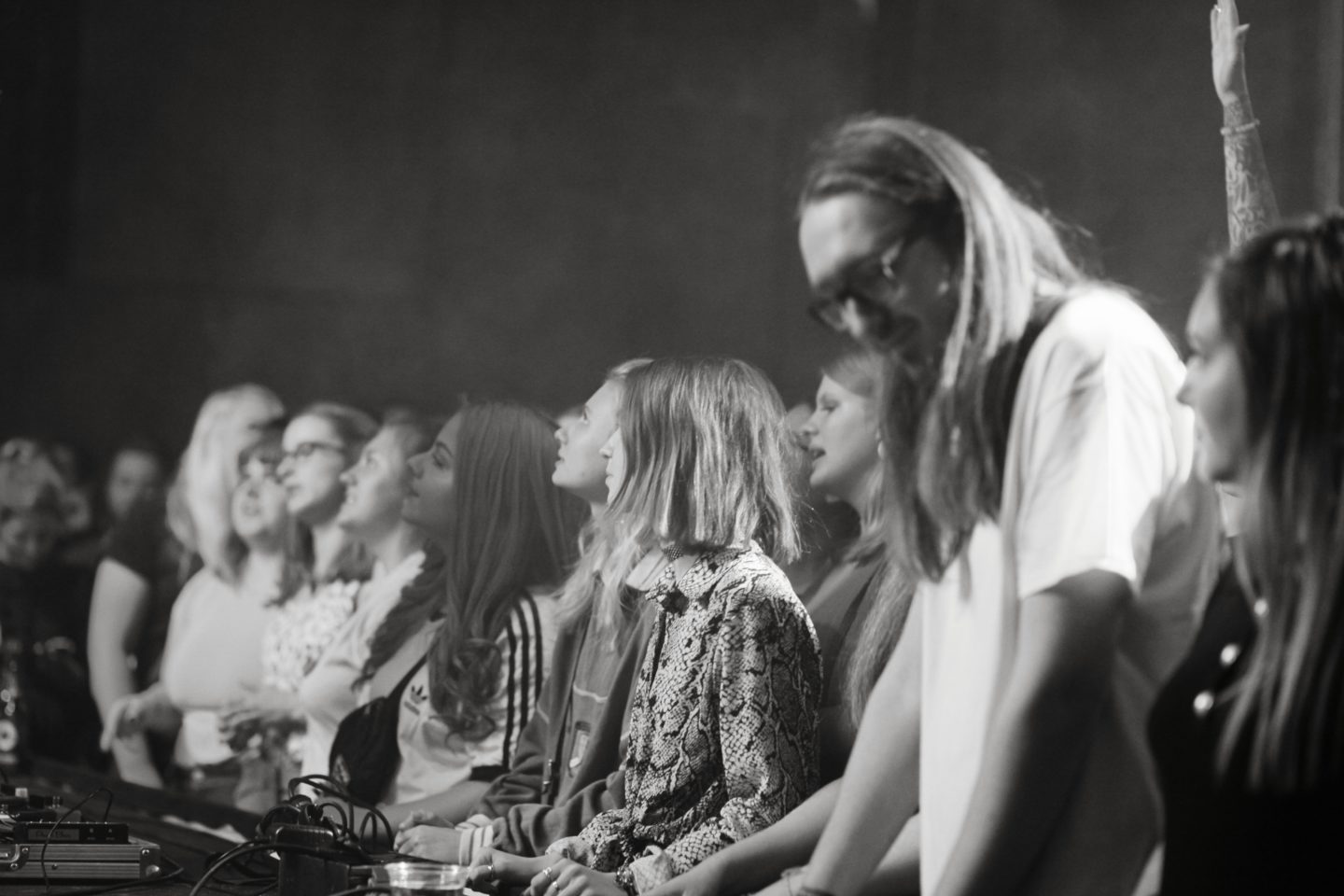 New Fall Festival is different and handles things differently. To begin with, the festival takes place in autumn. Then, it chooses its gigs to take place at locations where pop and rock concerts usually don’t happen. And, ultimately, it wishes its headliner and probably weirdest act to open the festival instead of closing it. On Thursday night, Mac DeMarco played a sold out comedy gold show at the majestic Robert-Schumann-Saal. For that occasion, all seats were removed strangely making the room look even smaller than it actually is. And all of sudden, minutes before DeMarco and his band appear, the space is flooded with a crowd as stylish as it could possibly get. Sneakers, Socks, glasses and beanies were ubiquitous. But although that look might appear uniform at first glance, it’s the details that matter: A crazy-coloured jacket, a patch overshadowing a used-to-be-hip-brand or that outrageous hair style.

Mac DeMarco’s early slot at New Fall attracted the youngest audience of the whole festival and it’s remarkable how open-minded and appreciative the crowd watched a lesson of absurd theatre going on onstage when in the second half of the concert DeMarco leaned back and let his band sing cover songs of classics such as Oasis’s Wonderwall. They talked nonsense, switched instruments, walked through the crowd. Nobody moaned but rather celebrated the unforeseeable. On that night, you really couldn’t wish to be somewhere else as the band’s brilliant absurdity (or is it insanity?) made you perfectly escape the blatant routines of everyday life. 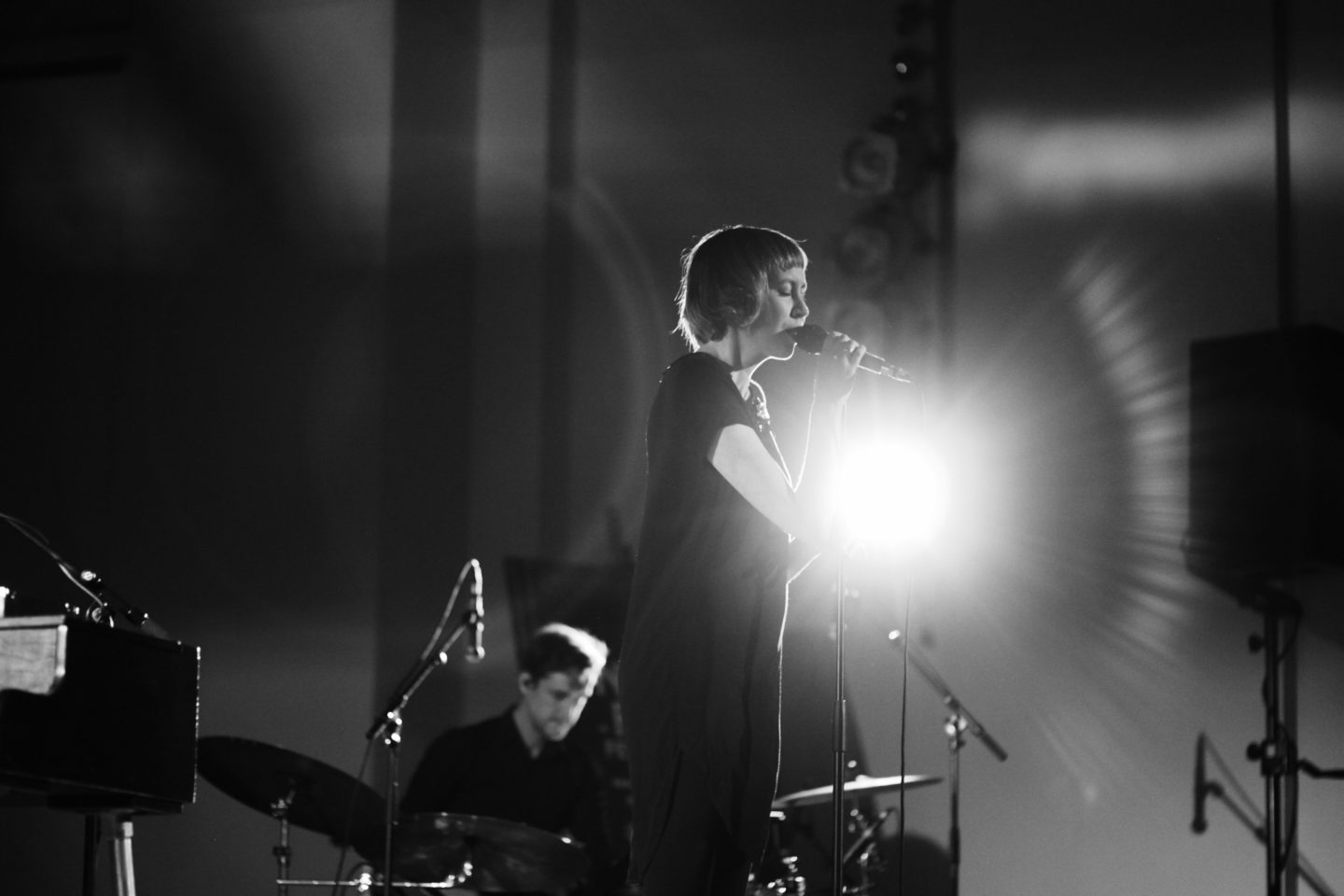 Not only is the New Fall Festival known for some crazy events (just remember that hilarious night in 2016 when Adam Green presented his take on Aladdin), but it’s also renowned to provide its audience with moments of peace and quiet. Very often, these magic moments take place at the Johanneskirche in the heart of the city where in recent years Agnes Obel or Mogli played outstanding gigs as part of the festival. This year, New Fall’s booking invited the German synthpop duo Hundreds to play at the minimalist church and a mixed audience of younger and older folks came to attend. It’s been cold and rainy that night, but New Fall made its Friday triumphant even before the music started by letting its partner Stadtwerke Düsseldorf serve fresh ginger and peppermint tea while at the entry German radio legend Klaus Fiehe stood silent smoking a cigarette. That scene very nicely epitomised what New Fall in my opinion very much stands for: Bringing different people together and making it all feel very familiar. There’s no borders that separate artists from audience, security guards welcome visitors in a friendly way and open doors, and when the show of Hundreds ended, Philipp Milner jumped over church pews while some people were still sitting to its left and right. Moments before, however, the band was still playing a slowed down gig yielding a new facet of their work that almost felt hypnotic. It’s been dead quiet in the church – and that only because people dedicatedly listened to what has been a pop mass of the finest kind. 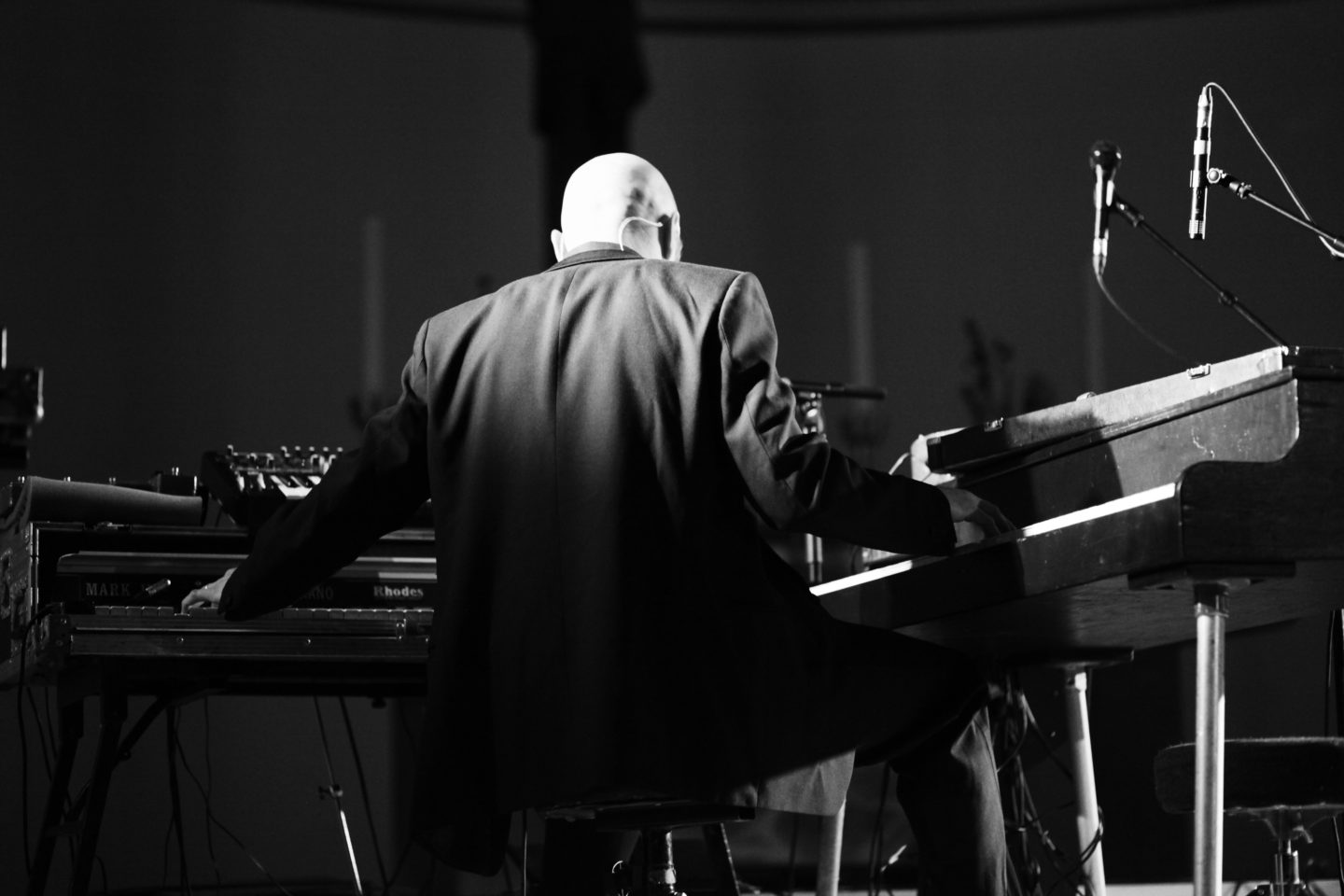 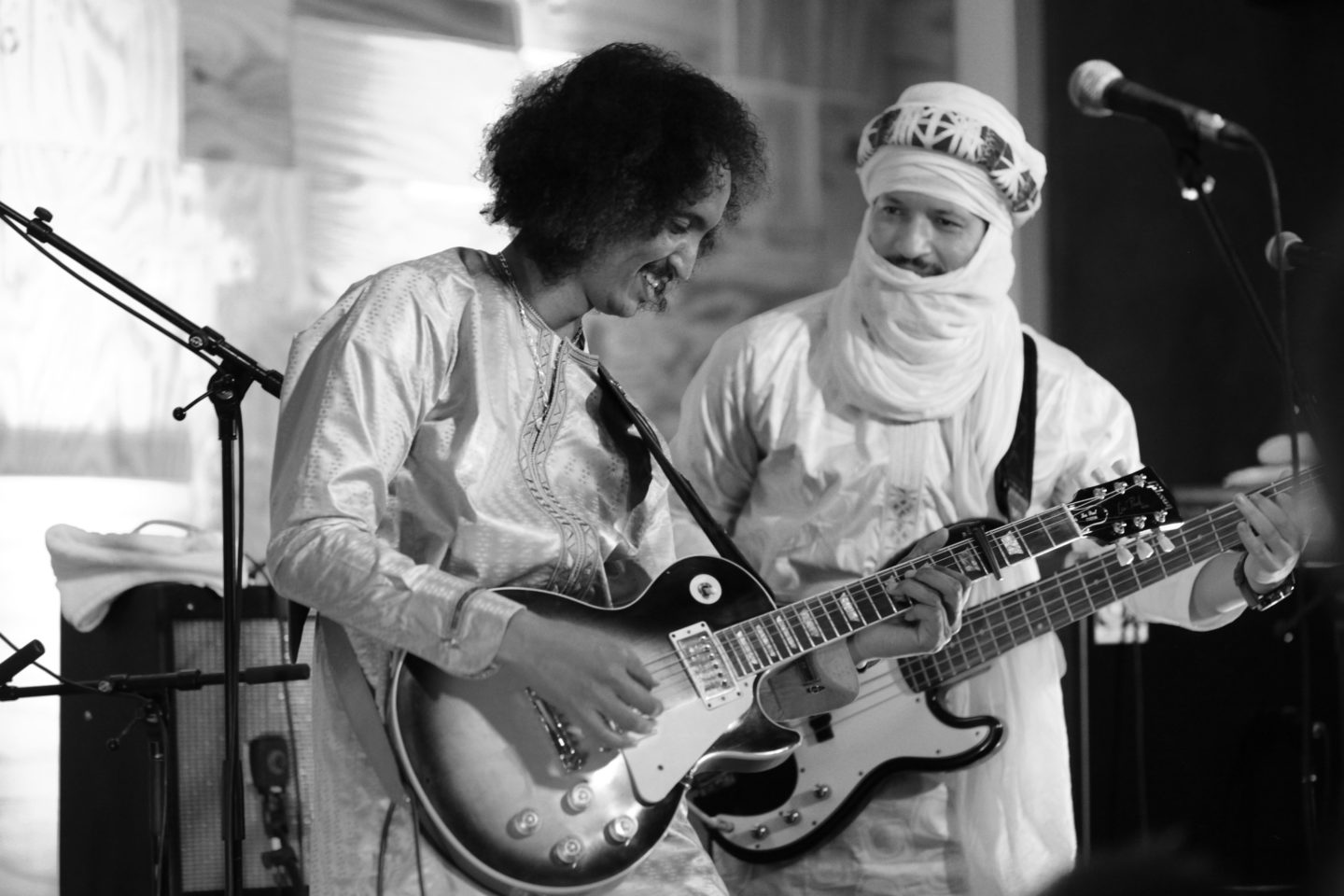 Sipgate, the internet/phone company which is one of New Fall’s partners, resides at a modern space that connects open offices with a high end kitchen and a stage to perform. It’s pretty much a place where new ideas are born and where innovation comes alive. Sipgate often serves as a place where exotic or young and innovate bands play for a small but dedicated audience. In recent years, acts such as the young French musician Jain or the literally voluble Isolation Berlin played the solid wooden stage at the heart of the company’s building which lies outside the city centre of Düsseldorf. This time, the Algerian band Tamikrest came to play one of their seldom gigs in Germany.

While the crowd was waiting for the band to appear, free drinks were served and unfamiliar faces started talking. ‘Very often the bands I’d like to see play live are too unknown to play in this city’, a man said to a woman who obviously didn’t know much about Taikrest. ‘I hope you like it’, he concluded and the woman just smiled. When the Algerian Band entered the stage, he leaned back towards a wall in a very relaxed way and smiled back to her.
The concerts taking pace at Sipgate contribute to another quality of the New Fall Festival: Bringing in the unexpected by inviting bands that aren’t booked for each and every festival taking place in the same year. Therefore, Tamikrest seemed more than motivated to play a sweet gig including songs of their manifold discography. Watching the band onstage, it felt like they perfectly fitted in here: The look of the band combining traditional as well as modern influences, their music intertwining the melodies of different cultural backgrounds, all held together by an intriguing voice singing lyrics that most people watching the concert may not have understand but felt – and that’s what music is about. 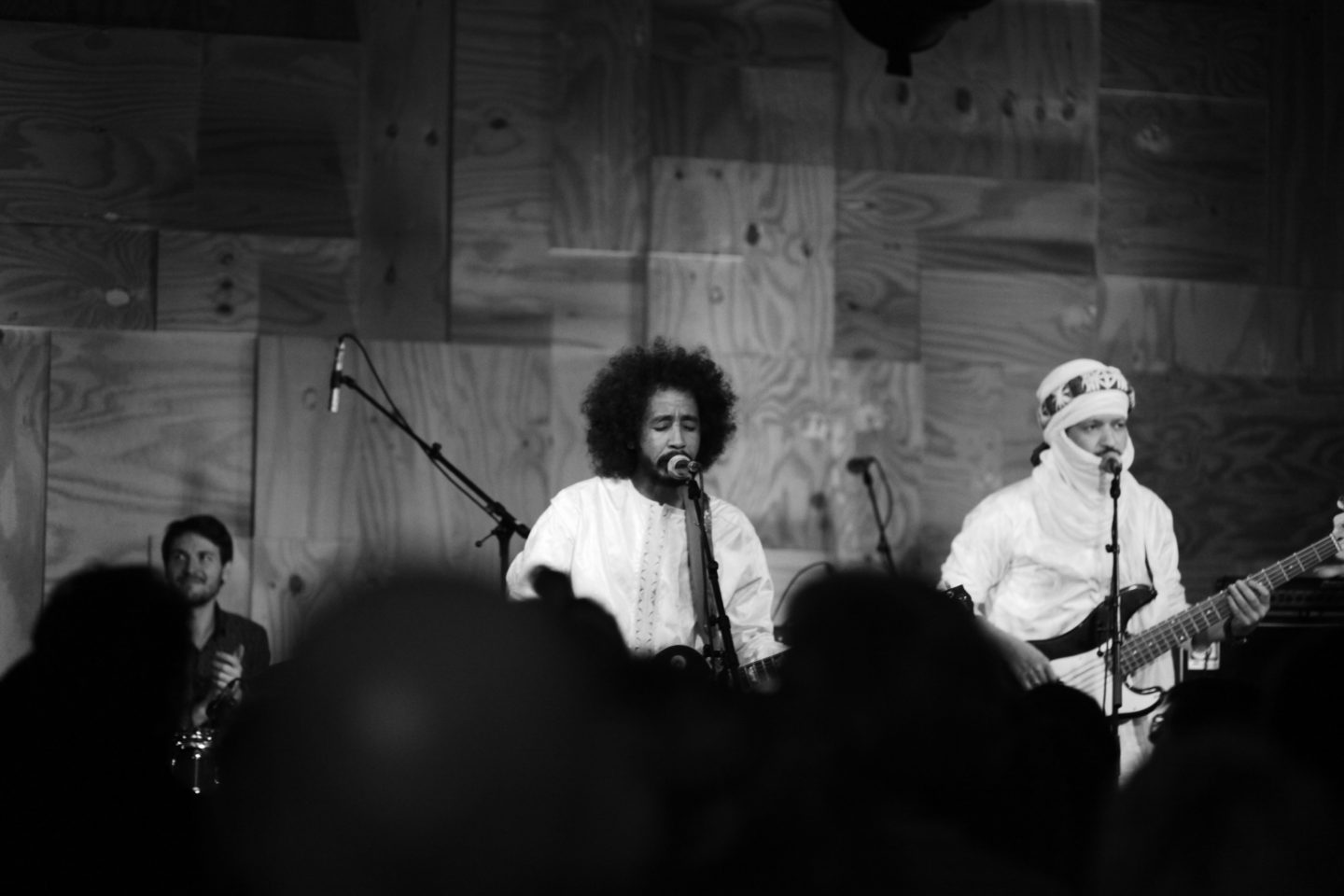 Bernd Begemann at me + all hotel 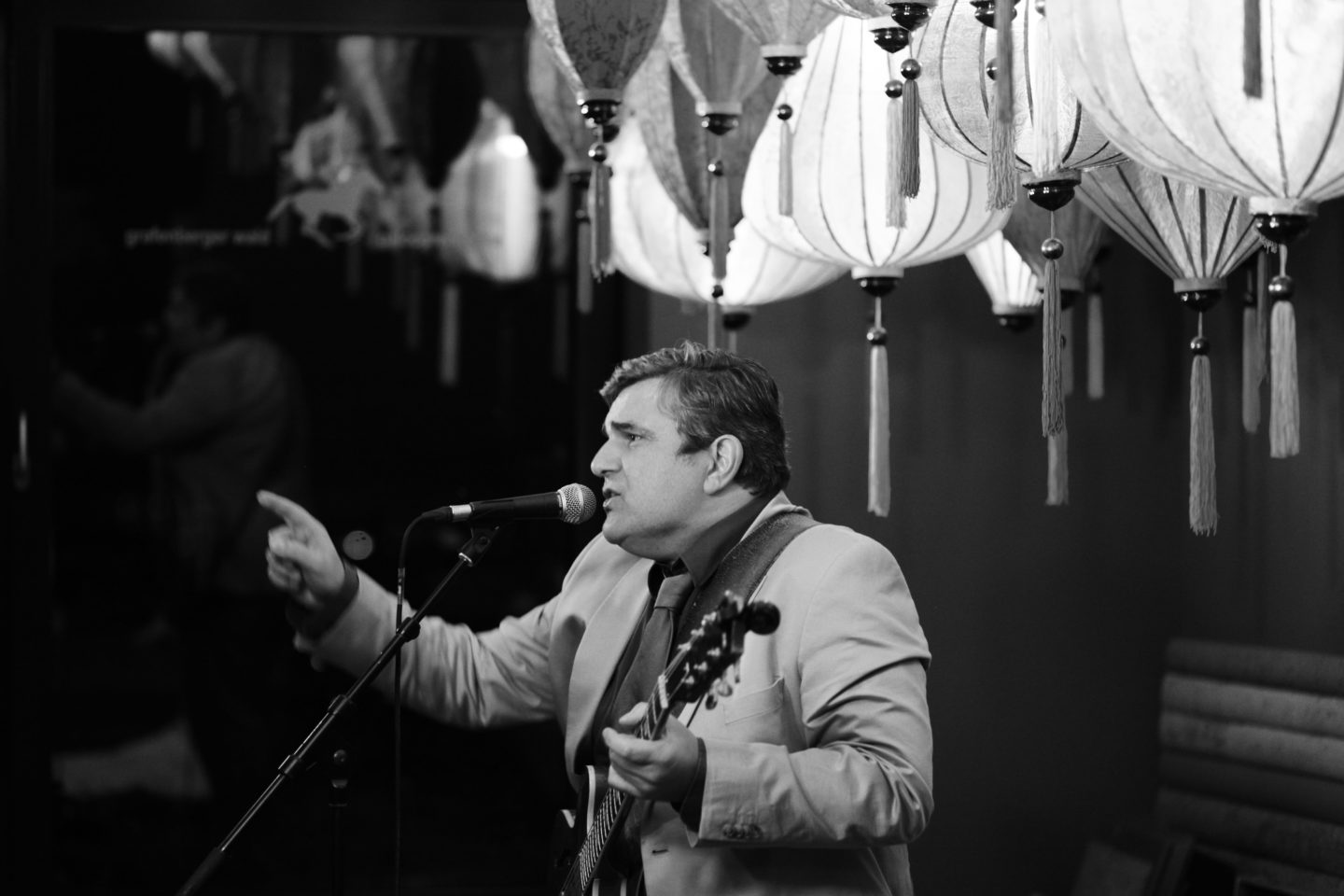 Sure, Bernd Begemann is a musician. Even more so, he is a great and witty lyricist. But at the same time he’s a spontaneous and funny entertainer who is willing to please his audience with absurdity and (allegedly) non-cohesive talk. The word describing him best might be a true ‘phenomenon’, a phenomenon that forces its way through the music industry for more than two decades now, constantly driven by reinvention and personal development. In the 90s, Begemann had his own TV show where he greeted bands such as Tocotronic in his private home while wearing a bathrobe. Lately, he appeared in a fine black suit singing his songs backed up only by a piano player. To put someone like Bernd Begemann in a chic sky lounge hotel bar to play his songs is probably the most bizarre thing you could possibly do. And one of the best ideas of the festival!

Therefore, Begemann himself uses all technical effects to stress the oddity of such occasion: ‘Sky lounge’, he repeats time and again using a lot of reverb. What follows appears like an extended scene of a surreal movie. Begemann gives everything to connect (or is it rather confront?) with an audience that probably is more present for drinks, food and talking instead of his show – but that doesn’t bother him. He stops playing and singing his songs multiple times telling personal stories and clarifying that he truly comes from Hamburg. He climbs up an amp, shouts, deconstructs his work and leaves after an hour only to play personal favourites from an old iPod classic. Then he comes back for a second part. It’s a free show. The audience stays. And then, right in the middle of the concert, something remarkable begins to happen: The audience gets involved, smiles, starts to clap and listens to what Begemann tells. Sure, there’s a lot of puzzled faces in the crowd and some folks probably don’t know at all what he’s talking about, let alone they could connect, but Begemann simply doesn’t stop and goes on and on. It’s great to see Begemann perform that night. It becomes clear that the show is as much a challenge for the artist as it is for the audience, both trying their best – what fun it must have been for dedicated fans of Begemann to watch such oddity. 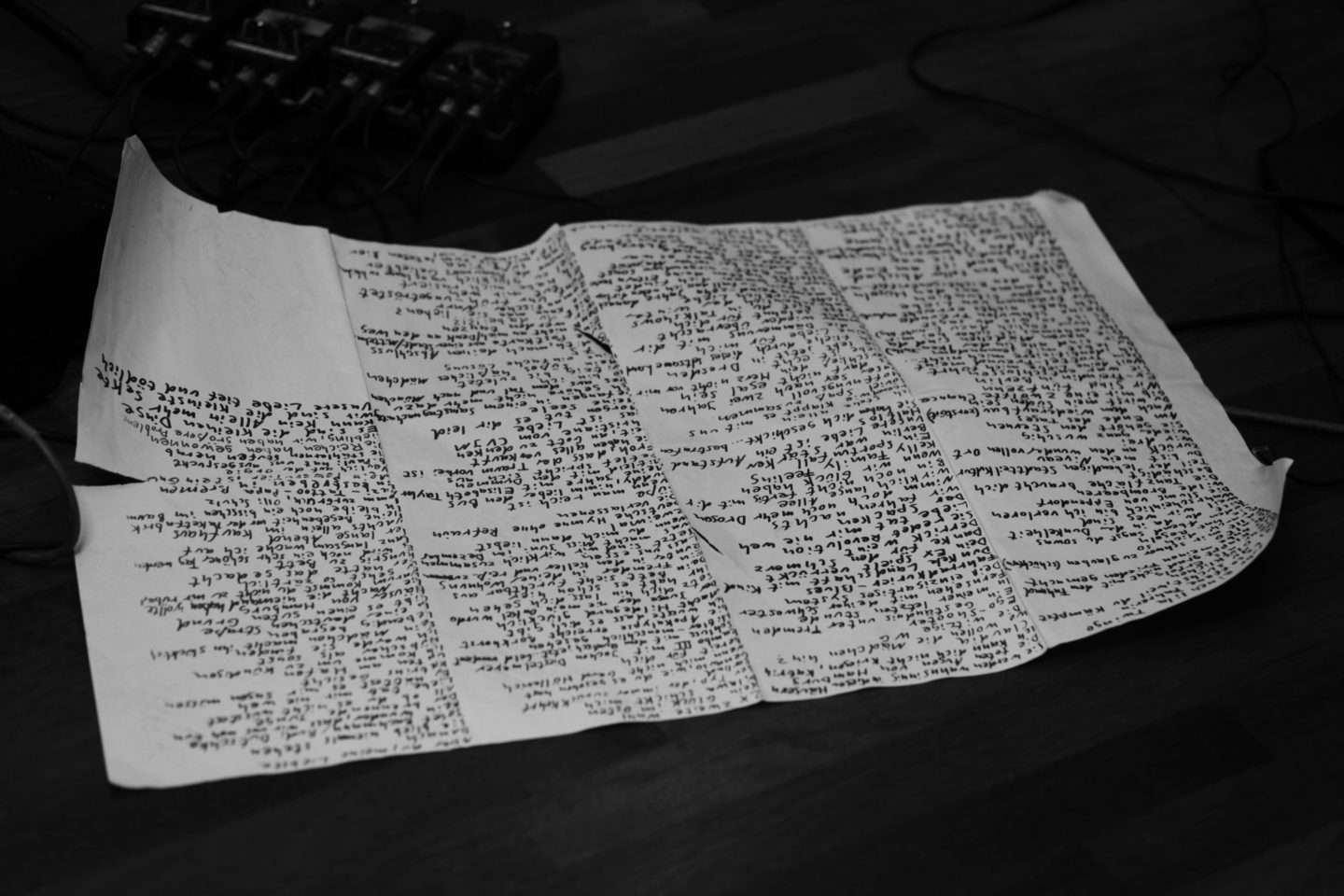 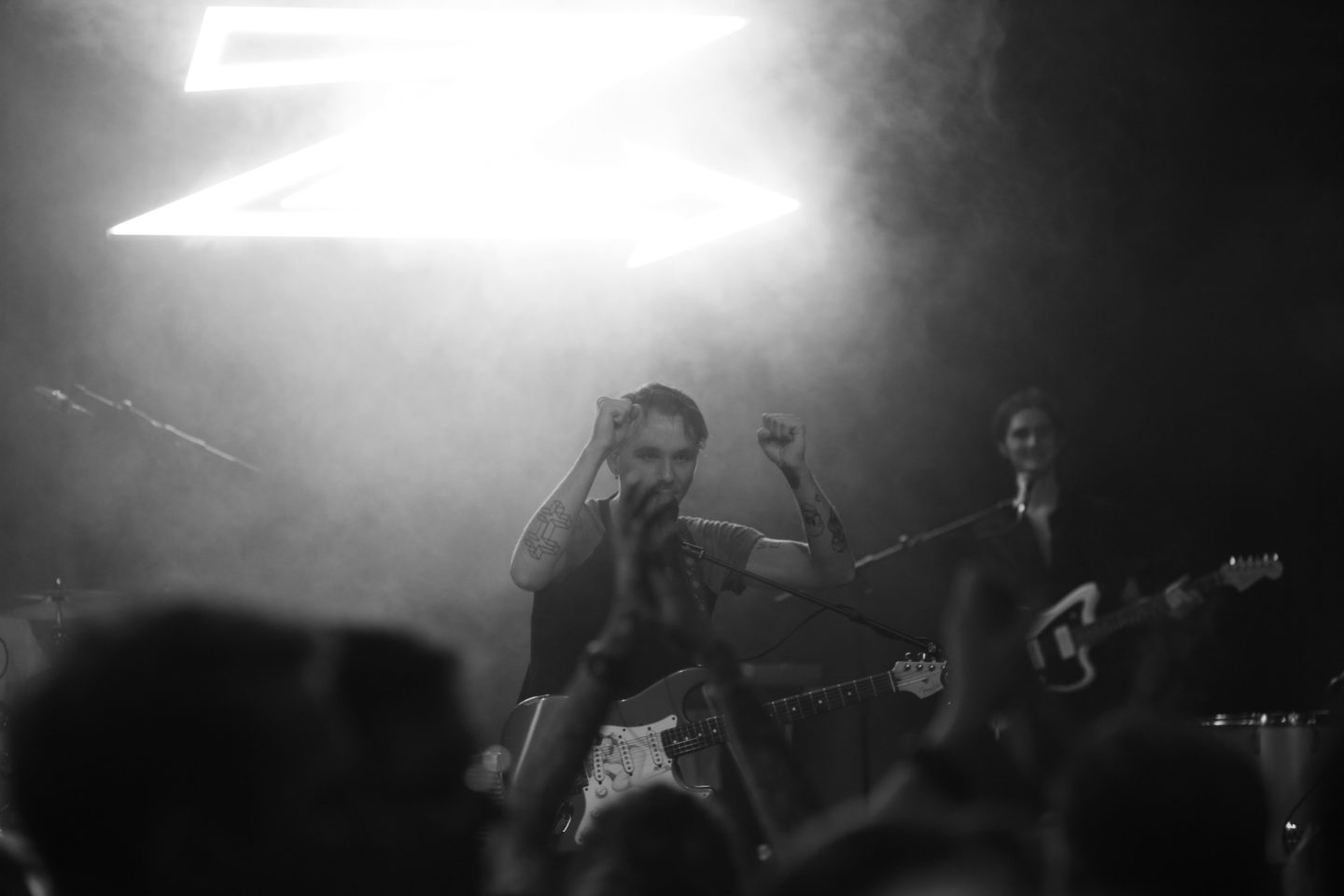 The Capitol club is a lovely place. It’s elegant and chic without being snobby. There’s big mirrors hanging on two of the walls reflecting the beauty of the room: Chandeliers hanging on the ceiling, black and red coloured interior, small seats and tables with candle light on both sides of the room – and enough space to dance in-between. Drangsal’s performance is one of only two gigs being housed at this gracious location and it’s also the concert ending the New Fall Festival edition of 2018. Taking place on Sunday night, the show is not sold out and, to be fair, there’s a good deal of space left in the back of the club. However, that doesn’t influence the love-filled atmosphere of that night: People move around slowly, raise their glasses of beer and sing along to the indie pop smashers of Max Gruber and his band. In the midst of it all, festival organiser Hamed Shahi-Moghanni claps out loud when Gruber tells that he’s happy and honoured to perform at the festival and that he’s even more happy to be create music for a living – something which truly cannot be taken for granted in this day and age. Meanwhile, some couples intensely dance and kiss while Drangsal plays songs like Love me or leave me alone. It’s beautiful to be watch everyone present that night. It’s a group of dedicated people enjoying life and music. Hopefully, the New Fall Festival continues to make that happen. 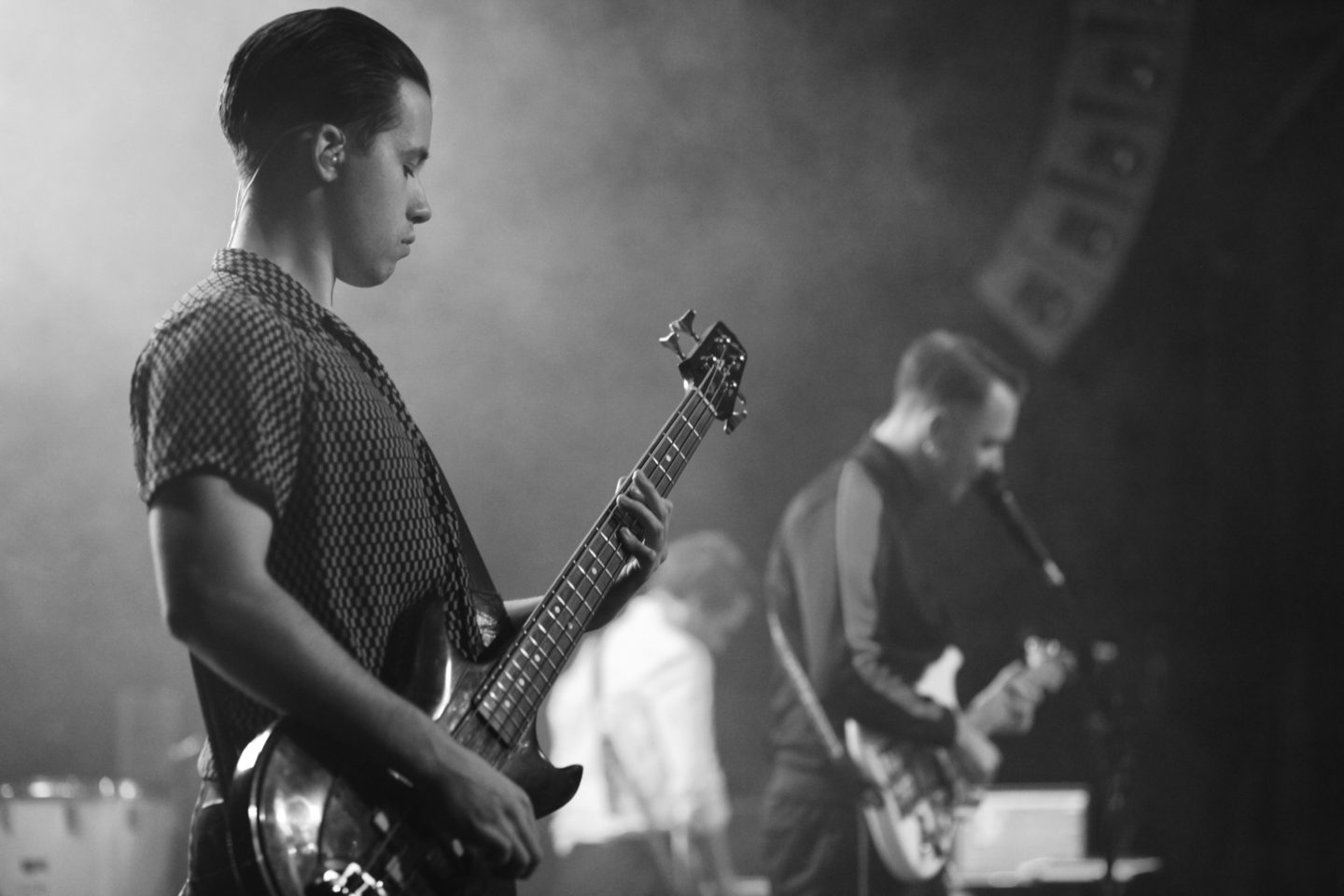 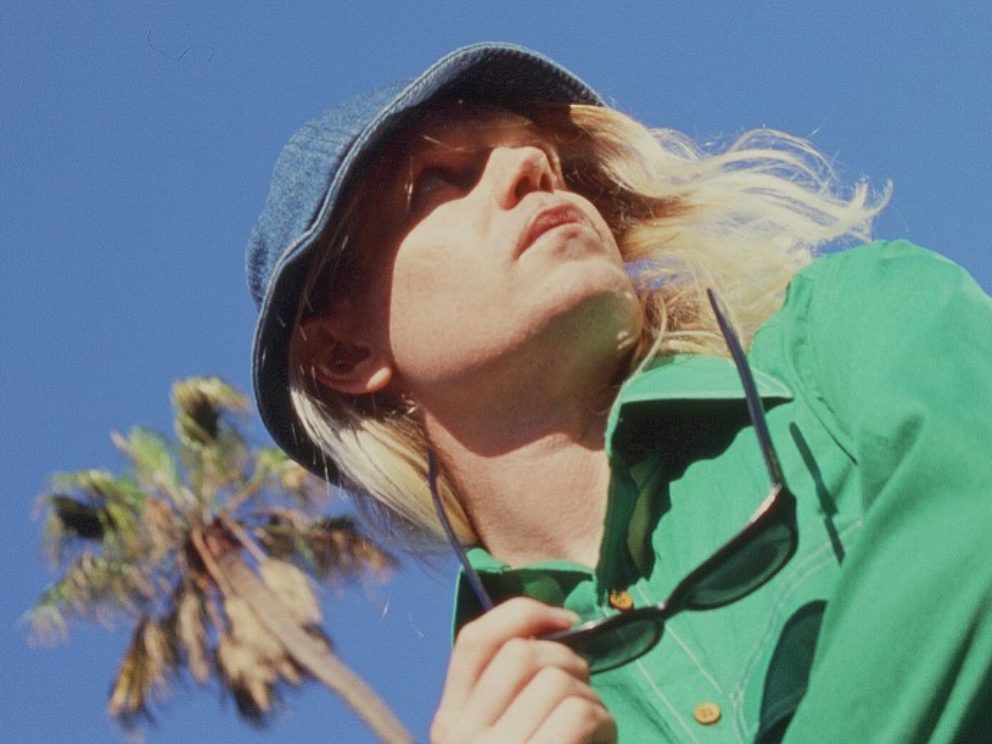