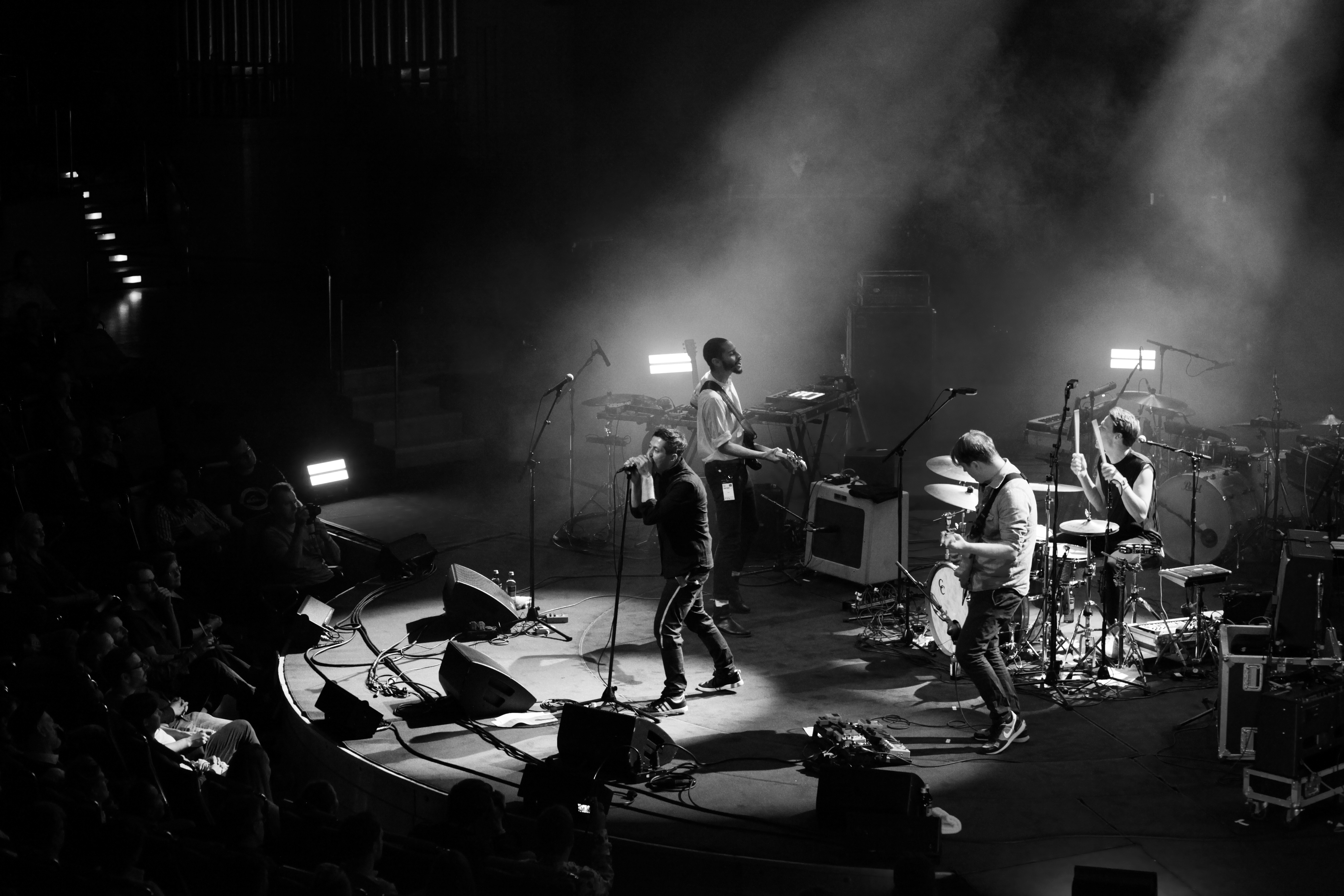 For any up-and-coming band that is just starting out, sparking interest in your music and building a reputation is a challenging endeavour: With only little released material, industry contacts and fans behind your back, getting a chance to prove yourself is extremely difficult. Hence, when in January my band Floral Shop, an indie-pop outfit split between Cologne and Münster, received an invitation to play at 2018’s c/o pop Festival, as part of its newcomer event Chic Belgique, we immediately recognized the importance of the offer. The numerous shops and locations at Belgisches Viertel in Cologne have seen several prestigious names in the past, with bands like Xul Zolar, Der Ringer, Isolation Berlin, Frère and Wyoming performing in bike stores, boutiques or cafes. Lots of bands have appeared there very early in their career, with only their first EP or even just one single under their belt. Few events give newcomers the opportunity to present themselves to so many potential new fans – and given that we had never played in Cologne before, we gladly accepted the offer. 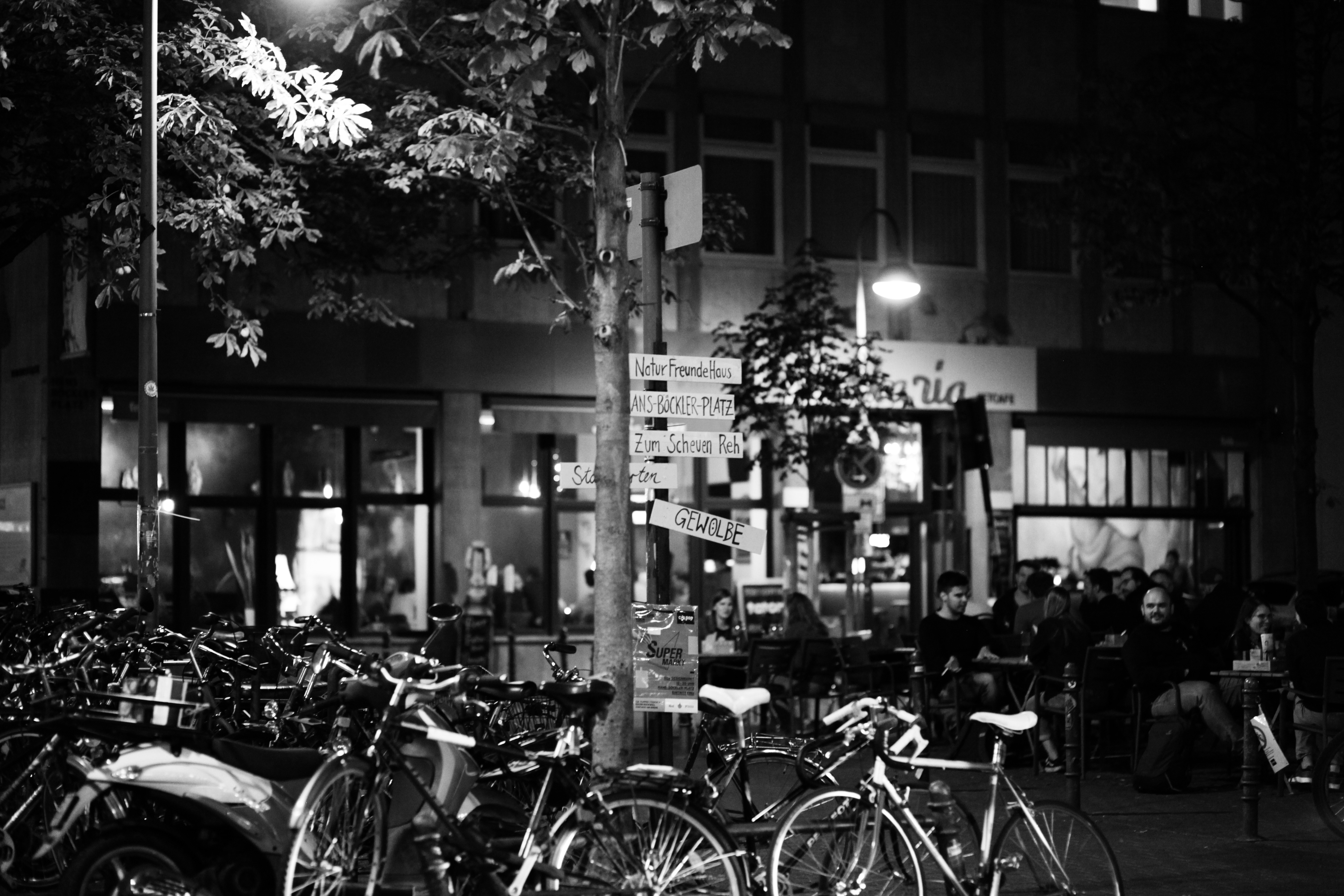 Unlike many other festivals, c/o pop takes place in selected venues in the inner city of Cologne, most of them situated at Belgisches Viertel. It’s only when you’re in close proximity to the venues that you notice the festival taking place, with huge banners hanging next to c/o pop’s main venue, the Stadtgarten. On train rides to the concerts, most people seem unaware of the festival or either of the acts I am looking forward to seeing. This is nothing particularly surprising in a city of a million people – but it makes for a reality check leaving the audiences of fashionable people behind and travelling back home to the other side of Cologne, to a neighbourhood that revolves around anything but indie music. To anybody familiar with the scene though, the amount of concerts taking place in parallel is staggering: Friday evening alone comes up with The Notwist, Drangsal, Wandl, Dakota and a showcase of Berlin label Jakarta Records playing at the same time – a nuisance from a journalist’s view, but a daunting level of competition for a newcomer, who wonders if anybody will show up. 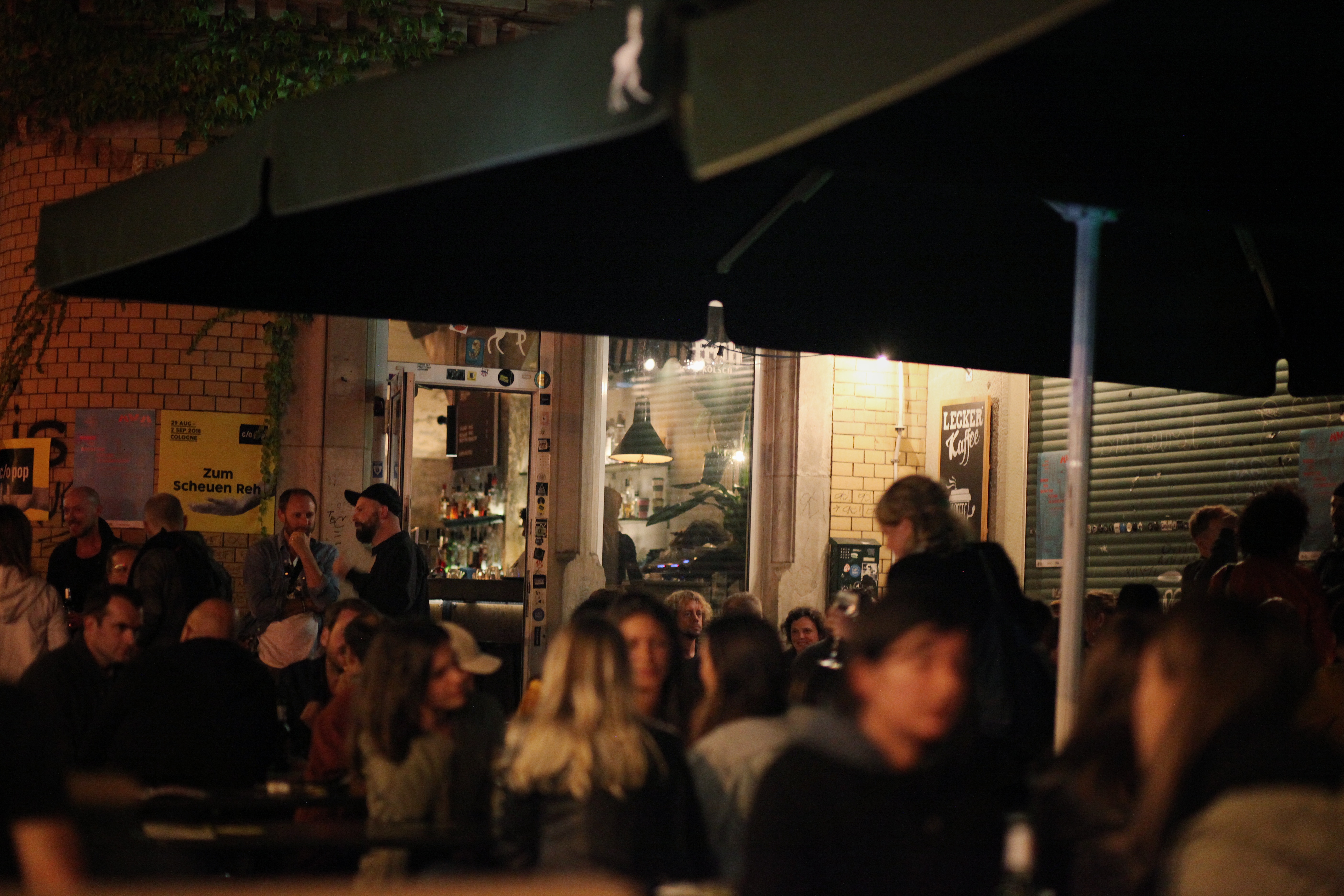 That Thursday evening, most of summer’s warmth has already receded as I enter Stadtgarten for a set of Dutch musician Yellow Days. I quickly find myself engulfed not only by the building heat in the concert hall, but also the band’s nonchalant performance that oscillates between King Krule-esque croon and moody, soul-infused grooves of his three-piece backing band. Beneath the youthful appearance, though, lies quite a bit of instrumental prowess, as singer George van den Broek launches in one of his numerous guitar solos. A little later, I witness a similar level of craftmanship in the slick rhythms of Paris-based band L’Impératrice, who perform at Gewölbe. The techno club, situated in a railway arch just below Bahnhof West, houses a sizable audience that readily surrenders to the slick, 80s disco-invoking rhythms akin to Daft Punk circa Random Access Memories. 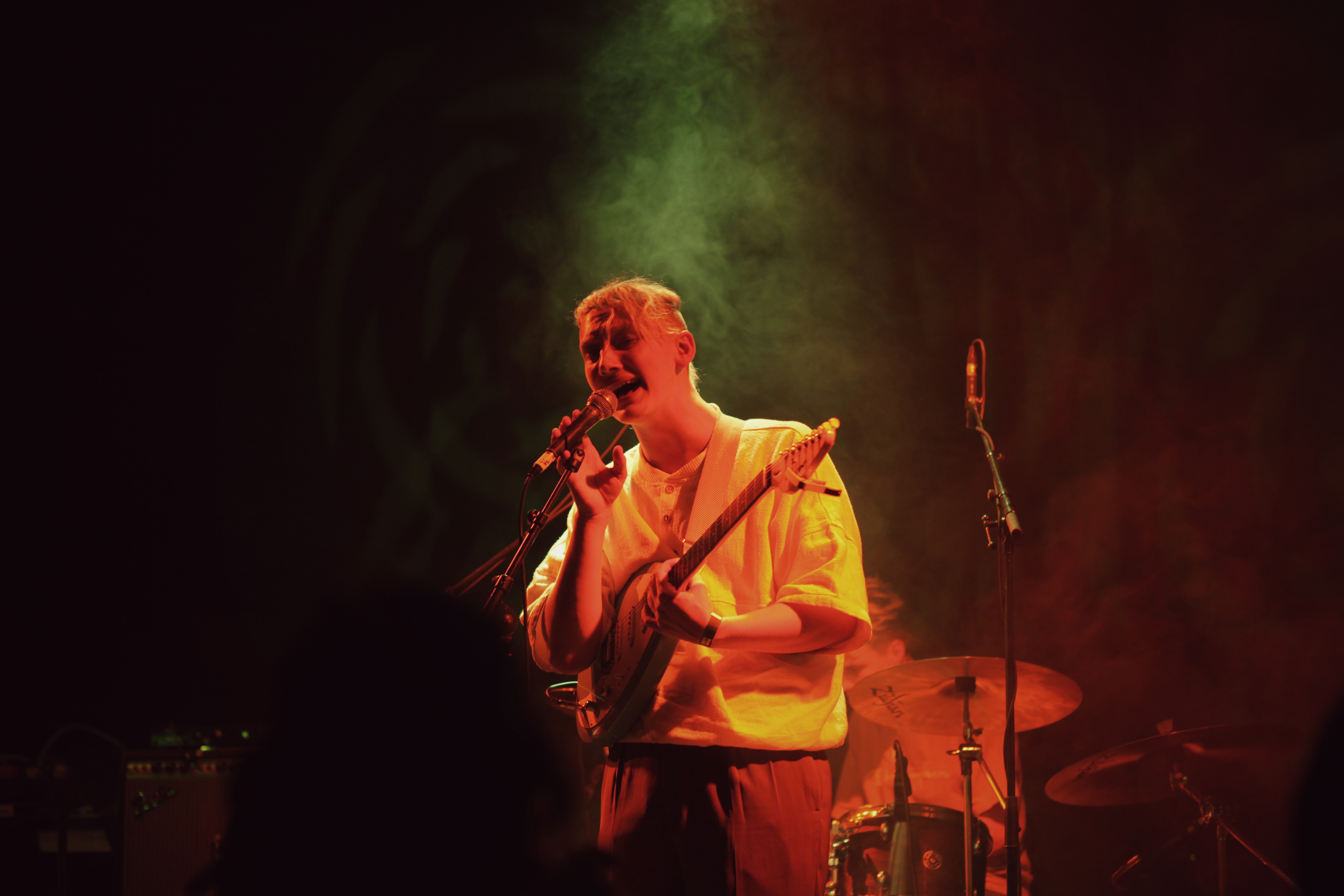 Looking back at both performances, however, I notice a pattern: Both acts display a readily accessible, slightly retro style and vibe that hardly shifts throughout their set. Is this how you build a reputation as an artist? I mention this uniformity to fellow Cologne musician Patrick Braun of Akwuar, who I encounter outside of Stadtgarten. ‘Why do so many artists nowadays attempt to be instantly recognizable?‘, he asks.

‘Bands become brands and just wanna pick up people, catch them. A cry of desperation? I don’t know. But after this it’s about keeping them and offering more than a one-dimensional world to explore. That’s where the story and colours of an album start to suffer.‘

Another acquaintance notices that I am wearing a shirt of now-defunct indie pop band The Cads and recounts her memories of a set they played years ago at Zum Scheuen Reh, a bar right next to Gewölbe. I recall seeing them myself half a decade ago, soon before disbanding – and I begin to wonder: How many of the newcomers that are appearing at c/o pop this year will be around in five years time? And is it enough to ride a hype wave with your debut album to survive for that long? 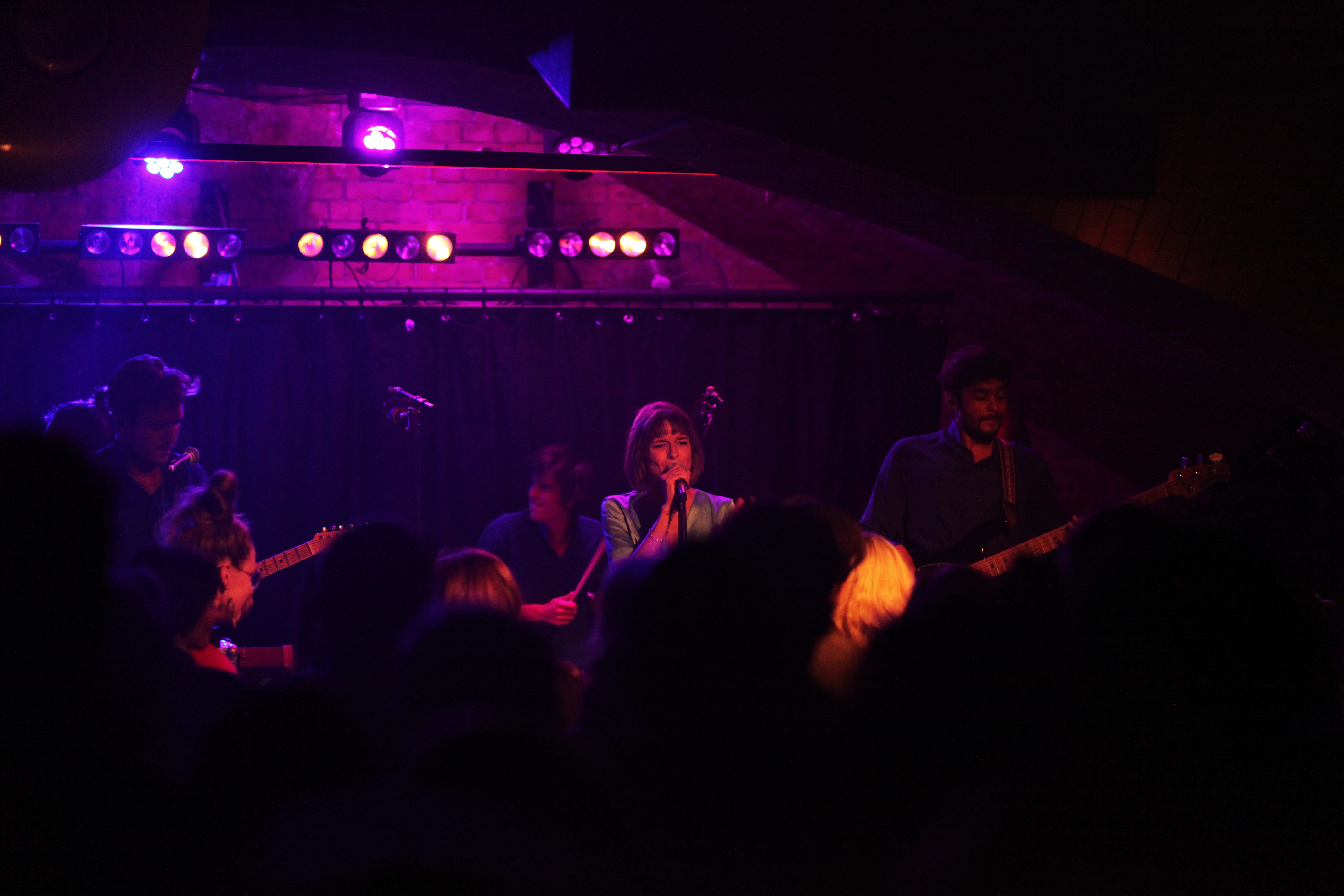 I quickly realize what hype can achieve when I enter a packed Studio 672 as the set of Essen-based trio International Music is on its way. The predominantly middle-aged audience clings to every word guitarist Peter Rubel delivers with a mixture of sarcasm and disarming melancholy, while gladly picking up any hints of bassist Pedro Goncalves Crescenti for a quick laugh, be it a ridicilously off-key falsetto backing vocal or a beat-boxed drum break. Their last two songs end in a whirlwind of krauty post-punk to frenetic applause. Having played Chic Belgique the year before and released their debut album via Staatsakt in April, I’m impressed how quick everything can fall into place. 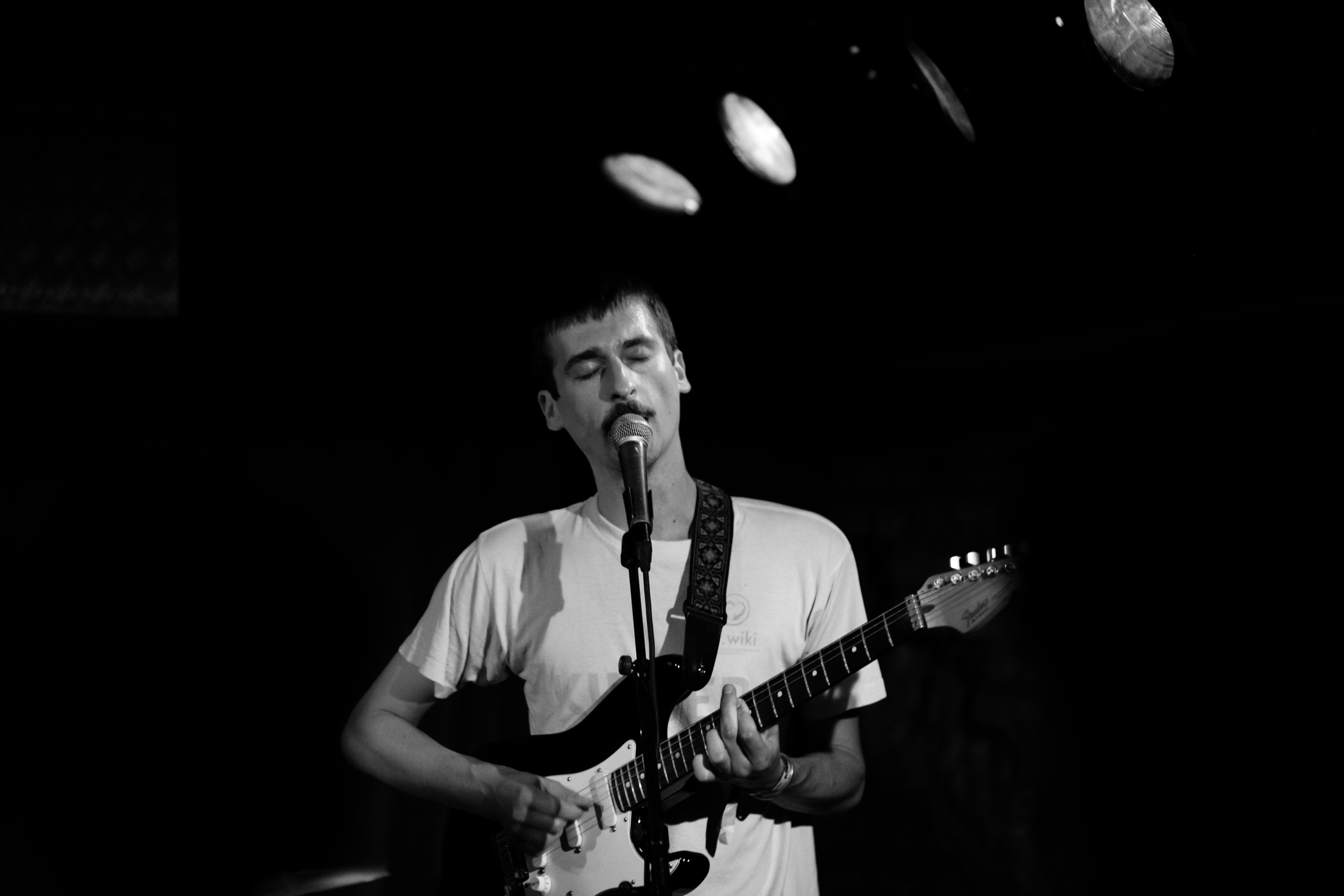 Most bands that have come to c/o pop Convention on Friday to attend the New Talent Day are probably hoping for that kind of ascend, eager to present themselves in a live setting to an audience of professionals. As I find myself in a keynote of Robert Meijerink, booker of famed Dutch showcase festival Eurosonic Noorderslag, I learn that choosing the right bands for Eurosonic is not only a question of talent or mainstream appeal. Even more important, to Meijerink, is determining whether an artist has the support network to benefit from a performance: ‘Every musician needs a team on the ground’, he says and explains how only bands with professional support might succesfully leverage the attention generated by an impressive showing. But how do you build up that kind of network as a band from the countryside? Is it really enough to do the best you can as a musician to make it? Those questions remain hanging above the audience. 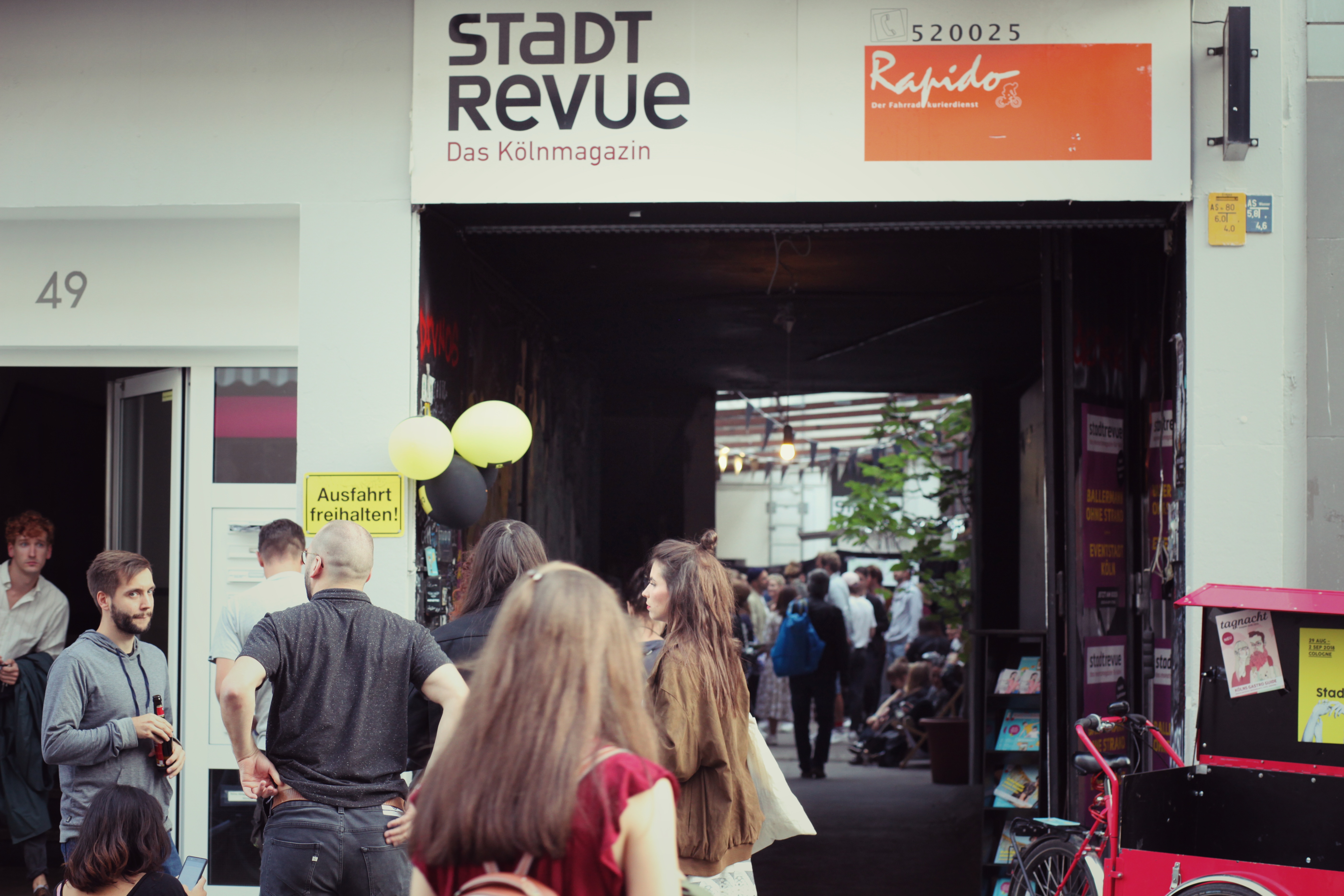 Amsterdam-based band Dakota, who perform at the Dutch Impact showcase later that afternoon, seem to have moved past that stage. Both the imaginative compositions and the multi-part vocals of the all-female psychedelic pop outfit win me over in an instant, while also sending a normally stoic audience of professionals into a modest groove. ‘It is only our second time in Germany after playing Reeperbahn last year’, singer Lisa Brammer tells me after the concert. ‘It still is a bit intimidating to play in a foreign country, where you don’t even speak the language.’ 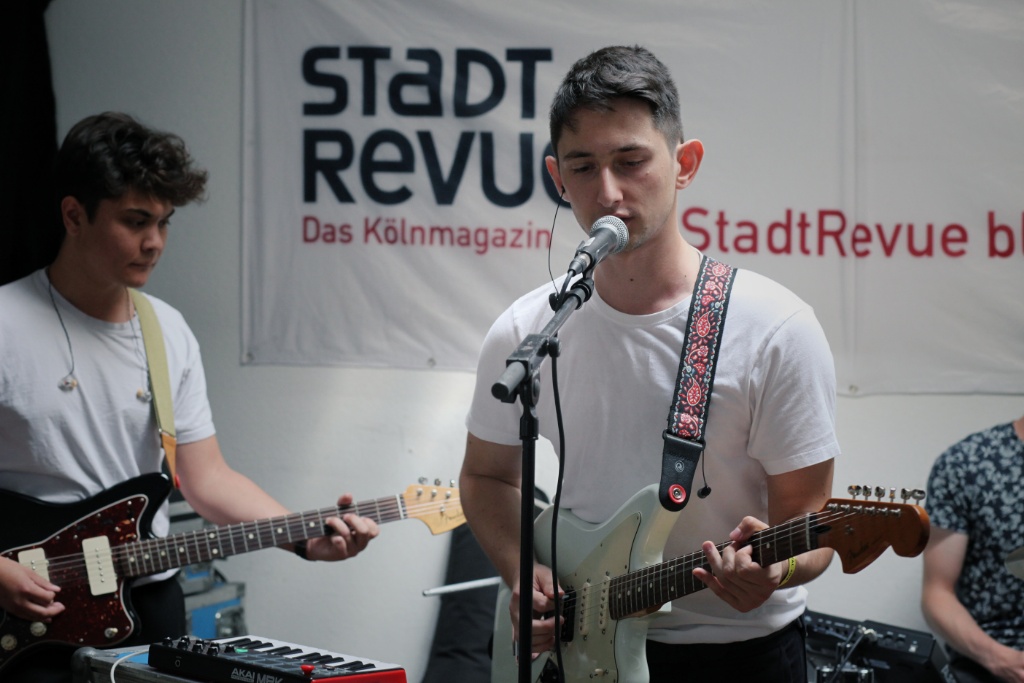 Though the stakes at our performance at Stadtrevue are much lower, the prospect of playing to an audience of strangers is nonetheless intimidating. Most of the time passes by in an adrenaline-fuelled haze: arriving at the venue, setting up, making sure everything sounds as it should. Onstage, the constant flux of faces both familiar and unknown is hard to follow as you are caught in the flow of the set. Outside though, the picturesque scenery of Stadtrevue with its nicely draped beach chairs and improvised bar makes for a laid-back atmosphere, and the muffled music pouring out from a row of open windows only adds to that casual vibe. It is only after the set that relaxation kicks in for me as well and I greet a couple of friends I had spotted in the audience just a few minutes ago. The heaps of unknown faces watching us play have already disappeared by then. As we are loading up our gear, we are even spoken to by a couple who was completely unaware of the concerts taking place right around them. 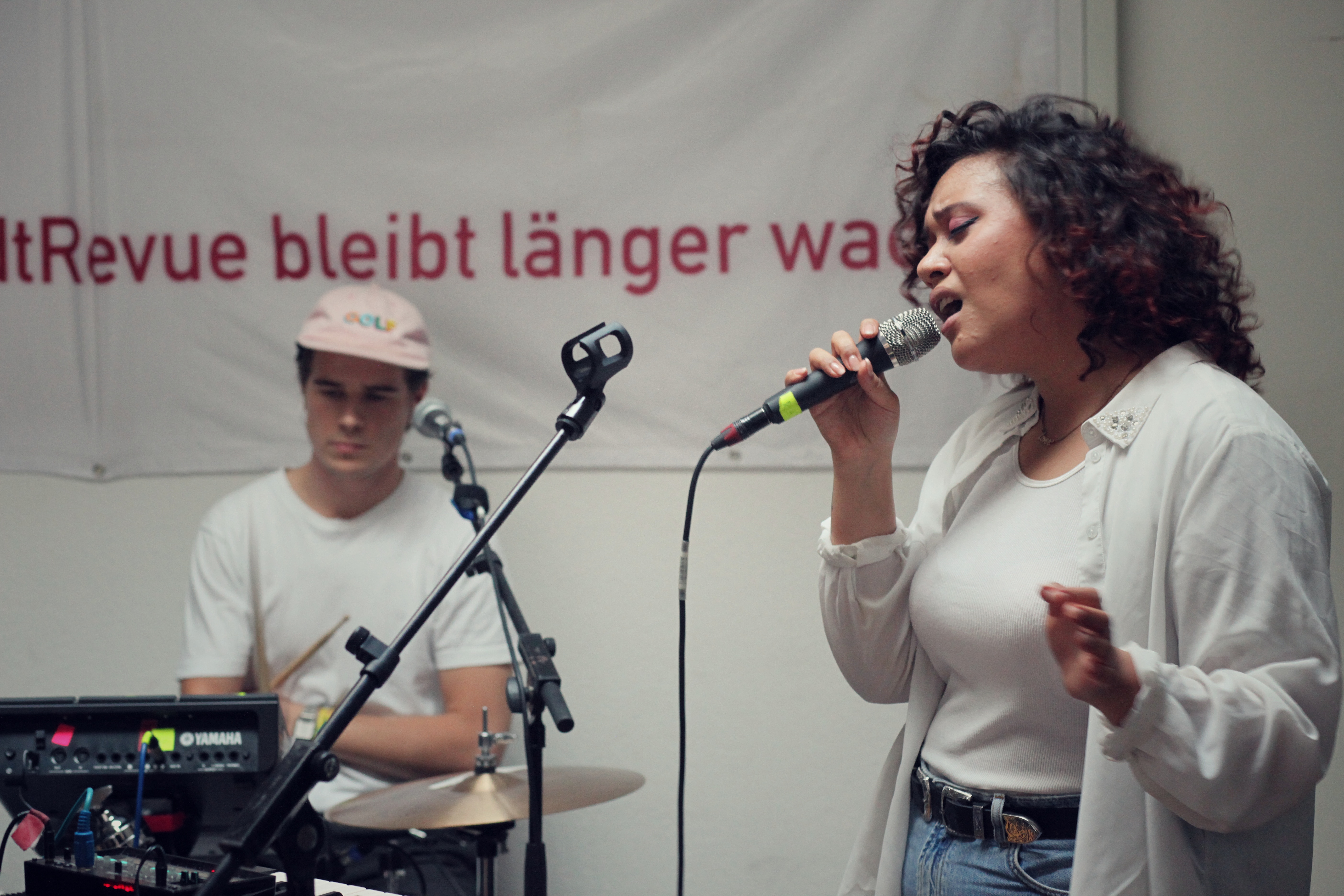 It is an entirely different universe than the one I experience walking into the Philharmonie to attend a special performance by The Notwist. Entering the giant, steeply ascending auditorium, you immediately grasp that this place was made to listen to music. The Notwist are situated in a circle with projections glimmering above their heads and their cinematic music takes you on a journey where you completely forget anything around you. They appear like unlikely rock stars – except their tracks sound nothing like arena rock, rather than works of a modern orchestra. 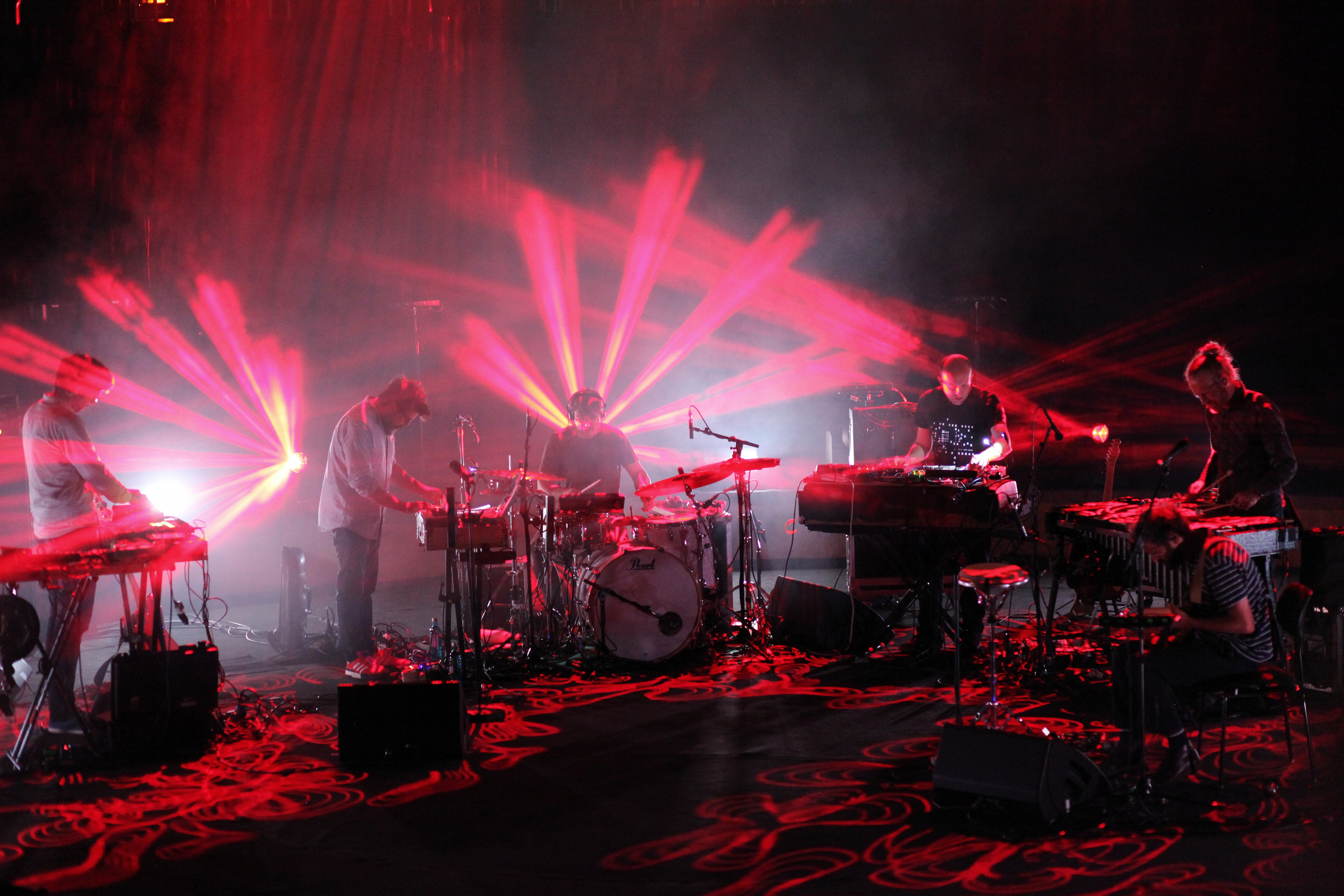 The Notwist at Philharmonie. Photo by Felix Weichelt

A similarly alien feeling permeates the performances of Jungstötter and Messer at Britney. Fabian Altstötter, microphone stand in hand, restlessly wanders around the dimly-lit stage as if haunted by demons. Accompanied by a pop noir soundbed, he is passionately singing, if not pouring out his innermost desires to an audience seated right in front of him. It is not only the theatricality of the happening that renders the moment so special. The pitch-dark auditorium and well-considered architecture of the venue speaks of the respect for the theatre performances that normally take place here. Considering the intellectual qualities of music and demeanour Messer later display on the same stage, it is a perfect match despite the absurdity of listening to a punk band in a theatre hall. I am left to wonder, is it only the most distinguished artists that deserve to perform in such luxurious surroundings? Right in that moment, vocalist Hendrik Otremba expresses his thanks for being invited to play at c/o pop – and in his face, I see his gratitude for finally finding an audience that shares in his greatest passion. 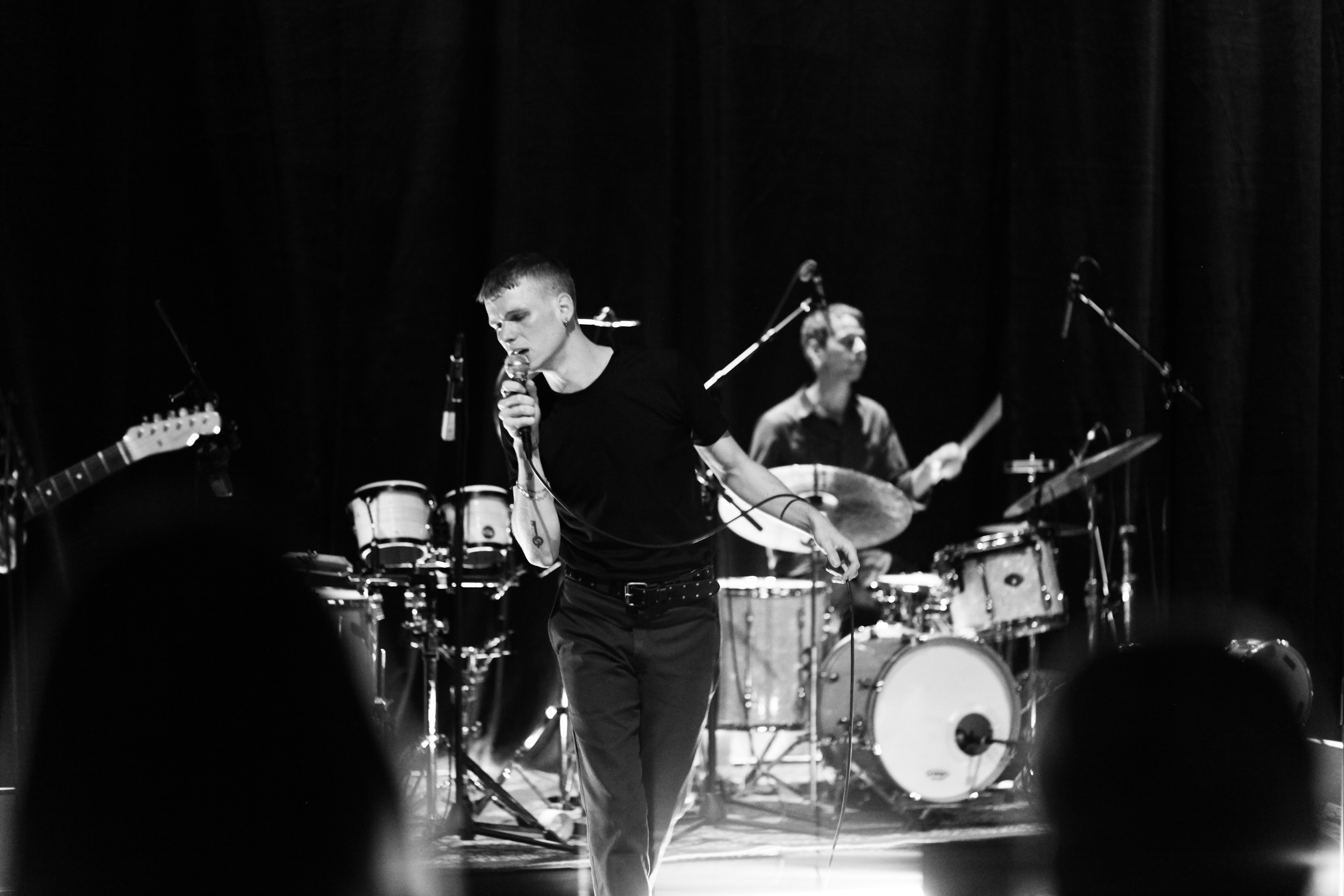 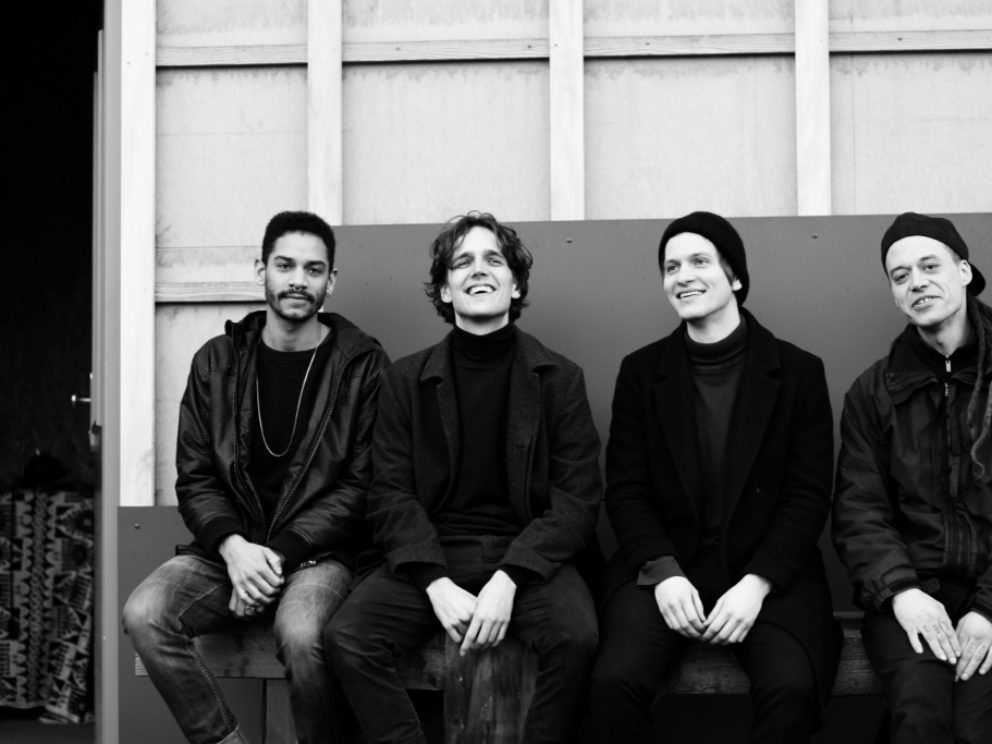 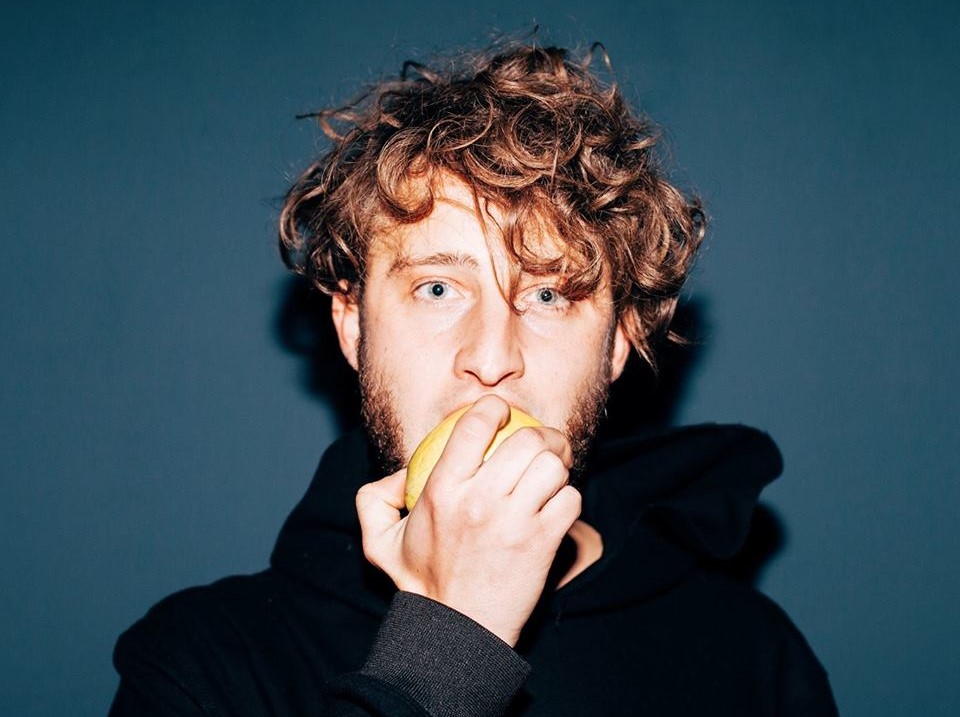