I know, I know. It would have been a fitting narrative frame for this piece to have actually lived the three stages of relationships I’m about to outline simultaneously to the one the band tells but that’s simply not true. I fell in love with Lights Out, the album that’s literally about falling in love, shortly after the long-term relationship of my twenties ended in the late summer of 2011. So, there is a different connection to the music of Kacey Underwood and Alice Costelloe aka Big Deal but that didn’t stop me at all from falling in love with the music and being quite sad when they split of in the summer of 2016. In retrospect it might have been inevitable and over time I realised how their three studio albums to me somehow felt like a documentation of the rise and fall of love – lyrically and musically.

Of course, the story of Big Deal also tells the one of Underwood and Costelloe’s own relationship and a band that was born out of the natural creative chemistry between them. What started as a pretty intense friendship somehow slipped into a full relationship and later out of it. The two kept all these things pretty private till the end so to this day it’s hard to tell from the outside when love came and when it ultimately left (there’s a good in-depth talk at Noisey from 2016 which I can recommend once you finished this one). Just like me the two got their own personal story and it’s left to listener to find an own interpretation of what the music tells and what it doesn’t. In those five years Big Deal went from a pretty acoustic-sounding duo to a raw and grungy four-piece band and if you happen to be a fan of good old-fashioned independent rock with lo-fi attitude please take a moment and discover this group.

One girl, one boy and two guitars – that’s literally all Big Deal‘s 2011 debut album needed to transport that special feeling of two people falling in love. It’s got all the tension, the excitement but also the slight melancholia you get when you reflect on it a bit longer. ‘Our bedroom’s lit, our heroes on the wall. Could anything ever be this good again?’ asks the band in the opening song Distant Neighbourhood. With a youthful naivety the two protagonists get attracted to each other, exchange kisses, share hopes and dreams. They wait for the arrival of summer, worship each others presence and create a warm intimacy due to the overall reduced vibe of this record. Homework is the key track of the album, one that documents that ‘young hearts run free’ vibe better than any other song on the album.

I still think it’s one of the greatest and most on-point love songs every written. Lights Out is a perfect record for falling in love, warm summer nights and those moments that make your heart frequency speed up a bit. It doesn’t need big words and musical complexity to achieve its effect and that’s its biggest strength to this day. 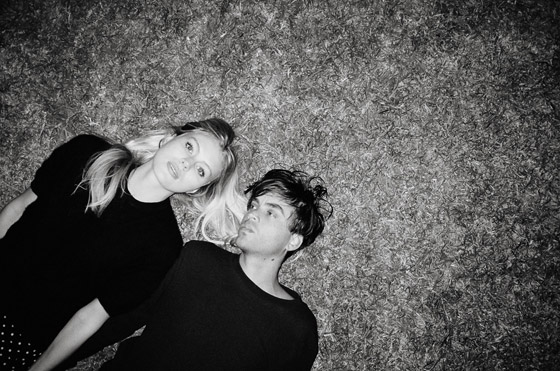 Two years later the young love has blossomed in a full relationship and June Gloom documents this confidence also in terms of its sound. The opening Golden Light first tricks us into believing we get the same vibe like on Lights Out but then suddenly the tender guitar and vocal performance we’ve come to love gets extended by a full rhythm section, saying: ‘Big Deal is a full band now’ and that’s what the following songs tell us. Swapping Spit and Teradactol are pretty grungy rockers while Dream Machine surprises with a massive shoegaze vibe. However, the tender moments are still right here on songs like Pristine and Catch Up. The intimacy between the two protagonists is still there, the vocals still form these wonderful duets but the world surrounding them got way bigger. 2013 was the peak of Big Deal‘s short-lasting career. Signed to Mute Records they even opened up for Depeche Mode back then. At that point of a relationship the naivety clashes with the reality, eventually taken its toll on all of us.

‘It’s fine, all we need is time.
Crossing off the days, finally feel the same’

I still love the diversity of June Gloom as it combines the best of the band’s early days with their later work, creating one rich and fulfilling listening experience. It’s still a great summer record. However, 2014’s EP Sakura can’t be ignored here as it might actually mark the turning point of the relationship, especially if you take a closer look at the lead single Always Boys which starts with Costelloe singing ‘He’s a lover, not a fighter. But he’s gone’.

Over the next two years Costelloe and Underwood broke up and Say Yes is their attempt to make Big Deal work beyond a romantic relationship. Apart from that it was also a brave attempt to reflect on what went wrong with the other person still in the room. That’s a bit like what Fleetwood Mac did on Rumours in 1977 but probably not in the same way. The band’s final record is even louder than its predecessor. The tender intimate moments are barely visible anymore, instead tracks like Hold Your Fire, Avalanche and V.I.T.R.I.O.L. spread a feeling of bitter and raw anger with the two protagonists often shouting at each other. ‘I won’t tell you, won’t tell you everything works out right’, they scream in the title-track. It’s an almost therapeutic way of fighting with and for each other … well, and the band. Maybe that fight was doomed from the start but they gave it a shot.

The epic closing track Idyllwild is the moment where it all culminates – the record, the band, their entire discography. It returns to the tender moments of the beginning while not leaving out the heavier sides of it. It’s a simple and final reflection on their time together.

‘If we were older what would you say? If things were different?
If we could change? Or is forever too far away, too far away?’

Right from the moment I heard this song I somehow knew that Big Deal were done. It’s the perfect final musical moment to end it and maybe even the band knew it but tried to hold on to it. I remember speaking briefly to Alice Costelloe after a Berlin support show in the spring of 2016 where she said that they looked forward to return to the city in the fall. A few months later they announced their farewell. I was sad but not surprised at all.

I might read a bit too much into these albums but isn’t that always the case with records that really mean something to you? It’s a cliché to say that a band’s music will live on long after they are gone. It’s true though and despite you might never get the chance to see them live in concert these three albums (and that one EP) are still out there, they are timeless in their musicality and emotional core. There is no blueprint for love and relationships, folks and every story is a different one but if you are now interested in including Big Deal to yours I did a solid job here.