Hailing from Switzerland, the Duo is exposed to many the many languages surrounding them and recorded songs in German, French as well as in English. Each language the musicians say ‘gives the songs a specific color and form’ changing the overall mood completely. As Aurèle grew up in the French-speaking part of the country and Maryam in the German part, English has always functioned as a bridge between the two – in music as well as in private. When writing songs, MAREY always know ‘which song will be wearing which language’ without having a real explanation for it. The only two languages missing in the band’s array of tongues are Italian and Romanic. ‘THAT would be the ultimate Swiss band’, they joke.

Yet, even without those MAREY find an impressive array of colors mixed and matched to an album. Whereas the LP was a rather folky orientated affair, the latest release of the duo, Synthetic, is a move into a new direction. ‘As DIY musicians and sound engineers, we are always looking for new tools. We are kind of collectors of sounds. The process of learning new stuff is highly exciting and it always keeps us busy,’ the band say about the change of mood. Dabbling in electronic instrumentation, the single turned out to be a new experience. With this song MAREY, feel like they reinvented their sound and are newly born – until the next shift comes along.

‘We didn’t plan to go into a completely different musical direction, it happened naturally.’ 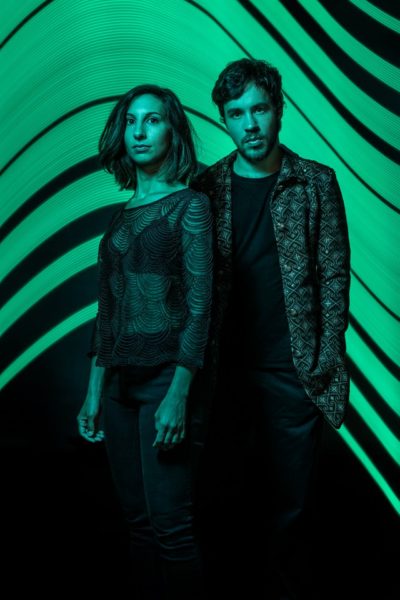 The drastic title of the LP already clarified the standpoint of the couple and the video to ‘Synthetic’ only cements their position as animal rights advocates. This time, the animals are eating the people for real, when the band made a joke out of the video connecting the new song to the former work. ‘The title of our last LP was rather provocative,’ they acknowledge. ‘Animal welfare is a subject close to our hearts, that is why it recurs. We both live vegetarian and always take care to buy organic and regional products. Today every second mammal is a ‘farm animal’ and that is madness.’

MAREY want to provoke and certainly succeed to make the viewers think about the situation with this video. The band explained ‘Synthetic’ as a surreal and artificial take on the world surrounding us and incorporate that feeling into the video, as well as, into the music. The brooding electronica conjures a dark and unsettling vibe, while the cello’s sweeping strings add to it. It describes the place our thought wander off to when we let them roam freely. So where do the band’s thoughts wander to? Aurèle says, ‘my brain starts playing music and thinking of musical concepts or random images, like puppies jumping over a fence. It mainly happens when I am trying to sleep,’ he laughs. Meanwhile Maryam rather sees a ‘mental cinema’ projected in her mind, of which she works some inspirations into the songs, too.

MAREY are not just special in their approach towards music making but also in their approach towards the industry. The duo is entirely independent and works through crowd-funding, one of the best ways to remain free and non-biased in the abysses the music industry holds for struggling artists. Using the Internet to connect with their fans, MAREY are one of the several pioneers, who rely on their fandom and listenership to make a living by allowing them to continue making music – give and get at its best. And it works! ‘We did not have any idea how to pay for the production of our EP, so we gave it a try and it worked out well,’ the band explains. ‘It is great to see that there are people who want to support your music. The deal was then, to give them a CD and, depending on the amount they donated, a special gift. We found ourselves writing so many ‘thank you card’ that our wrists hurt.’

Now, thanks to the support of their fans and their insatiable appetite for new musical tastes, MAREY premiere the video to Synthetic, right here on NOTHING BUT HOPE AND PASSION. Lastly, for those who were wondering just like me, where the band’s name comes from, this is the surprising answer. ‘We played a game called ‘Exquisite Corpse’ where a player writes down a word, hides it by folding the paper and gives it to the next player who does the same. In the end it forms a full sentence. That is how we got ‘Mystical Antelopes Riding Enormous Yaks’, which MAREY stands for. Have fun picturing it in your mind!’