While you’re reading these lines US president Trump is probably already looking to find another way to undermine the foundations of democracy by sending out a stupid tweet or doing another unpredictable thing that will piss people off. We live in strange times and however you might call them, ignoring the madness that is happening surely isn’t an option anymore. Being unpolitical and not getting involved in all these things won’t bring a solution. We said that a few times before and the field of popular music shouldn’t make a difference here.

Praised experimentanl indie music three-piece SON LUX just released their new EP Remedy and decided to give all proceeds from it straight to the Southern Poverty Law Center (SPLC). And that’s just one thing you can do right now. In the following guest article for NOTHING BUT HOPE AND PASSION the band’s Rafiq Bhatia opens up about the trio’s decision to take action and why it is important to not ignore what’s currently happening.

This morning, I heard about Resistbot for the first time. Yes, my head has been under a log — almost literally, as I’m in pastoral Serenbe, Georgia right now knees deep in an artist residency. But for better or for worse, I’m not disconnected enough to have missed the latest episode (as of this writing, anyway) in America’s slide towards authoritarianism, or the accompanying frenzy of social media activity. Yesterday, the posts about James Comey’s firing accumulated into a procession through my feeds. Unsurprisingly, I found myself in lockstep. We marched together, occupying the same virtual street, our voices thundering resoundingly inside of my echo chamber. The pros and cons of ‘online activism’ or ‘slactivism’ have been hotly debated, but in today’s example, there were reasons to hope that the outrage would lead to something at least marginally better than Thank You, Scott. Ideas developed as they propagated; some of the takes I read in my twitter feed were more incisive than what I found in the opinion pages. #MarchForTruth began to gain traction, showing that a significant number of people are at least tentatively committed to the idea of taking to the (actual) streets. And then there were the threads encouraging friends to use Resistbot, a free service that converts text messages into letters that are then mailed out to your congressional representatives. The instructions? ‘Text RESIST to 50409 or message me on Facebook and I’ll find out who represents you in Congress, and deliver your message to them in under 2 minutes. No downloads or apps required.’

In this moment of widespread activation, there appear to be numerous attempts to bottle the energy and time-release it: to convert the newly engaged into long-term participants the political process. New ‘tools of resistance’ seem to pop up every day; in addition to Resistbot, I recently learned about Give One, an app (co-developed by my friend Himanshu Suri) that helps you make manageable, recurring donations of 25¢ to $2 a day to charitable causes. Most of these devices are designed to streamline and/or moderate — to let us ‘resist’ on the go, on the cheap, in view of our friends, from the comfort of our own homes. In ways that are consoling, convenient, or so automated that we hardly notice. 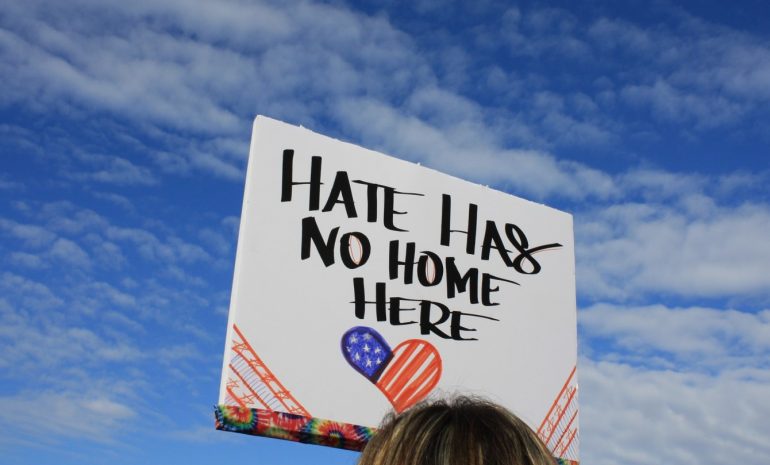 From the crowds that joined the Women’s March to the AHCA-related outrage on display in town hall meetings across America, there are irrefutable signs that all of this is making an impact (see the ‘100 Days of Winning’ diagram from Jeet Heer’s Path of Most Resistance in The New Republic). But in spite of comfort and convenience, are we losing something along the way? Might these same new methodologies also be sparing us a much needed confrontation with voices and perspectives that differ from our own? And isn’t their effectiveness tied, at least in part, to the way they protect us from that kind of confrontation? Doesn’t that sound an awful lot like the personalized search results and curated newsfeeds that helped us get here in the first place?

Especially in these circumstances, it feels important to try to separate what makes us feel good from what makes a difference, particularly in the lives of people more adversely affected than we are.

Both of these things are important, but the former should never replace or supersede the latter. For us, the process of making the music on Remedy was above all else a coping mechanism; it was our way of trying to make sense of the new reality around us, of reaffirming our values, and of redoubling our efforts. On the other hand, the process of releasing it has been one of reflection on what more we could be doing for others, and about the situation we’re facing in this country right now. And that starts with recognizing that there’s always more to be done. We hope to continue to find ways to do more, and to do better.

Striving for is sustained, active participation in political life

Our decision to donate the proceeds from all album sales/streams to the Southern Poverty Law Center (SPLC) is a step towards deepening the relationship between the music we make and the change we hope to see out in the world. In the immediate aftermath of the election, we saw the SPLC immediately step up to catalog and spread awareness about the uptick in hate crimes, intimidation, and abuse. We’ve also seen how they work on the person-to-person level by hearing about how they’ve engaged with friends of ours who have been targeted and threatened. And it’s important to us that they’ve been working effectively at this for decades now. In general, like with anything else, I think those of us who are relatively new to this kind of engagement have a lot to learn from people who have been in the trenches for a much longer time. What we are striving for is sustained, active participation in political life. Sure, we can share news on Facebook, march in rallies with our friends, and make songs that soundtrack those kinds of activities. But none of that is going to make a bit of difference if it doesn’t also inspire us to educate ourselves and learn from our history; to refuse to accept alternative facts; to cast an informed vote in every election; to keep the pressure on our representatives; to grow actively involved with and/or give as generously as we can to organizations leading the charge; to ‘throw sand in the gears of everything‘.