Introducing: Black Rivers – ‘Being on the move’ 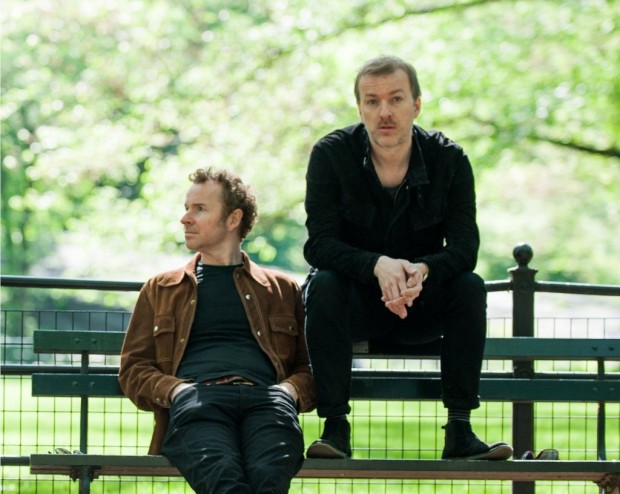 It’s quite unusual to have two guys in their forties with over two decades of experience in the music industry as part of NOTHING BUT HOPE AND PASSION‘s ‘Introducing’ category. But in the case of Jez and Andy Williams of BLACK RIVERS it might be in their favour as well. For over a decade the two Mancunians were part of DOVES, one of the UK’s finest musical talents of the last decade. Although the group was an integral part of the British music scene they never reached the success level of former colleagues like COLDPLAY or ELBOW. We don’t know if that was one reason why the trio went on a hiatus four years ago but it actually doesn’t matter since for now it’s all about new musical adventures by the two brothers.

Andy and Jez follow their former band mate JIMI GOODWIN (who released his solo debut Odludek earlier this year) next February with the release of the self-titled debut album of BLACK RIVERS. And although you might spot a bit DOVES-DNA here and there the new group mainly marks a fresh start for the two gentlemen. It’s an ambitious new concept with a clear idea and a precise sound. After all, these guys aren’t bloody newcomers but experienced musicians. It feels a bit like the exciting start of a new journey and we’re happy to join the group so we got Mr. Andy Williams to answer our infamous ‘Introducing Q&A’ right here.

BLACK RIVERS… ‘The Ship’… ‘Voyager’… Is your new band based on the concept of maritime travelling?
You’re right about the album having a theme of travel, but it’s not just maritime travel (although obviously The Ship, Harbour Lights & Coral Sea all have sea related titles). I think we both find being on the move very inspiring, we’d like to think this album’s great to listen to on long journeys i.e cars, planes, trains etc. and/or good for listening to while looking out of the window and just taking it all in.

How often do you as two brothers argue or fight with each other? What was the most recent one?
Generally we get on very well, but like most brothers/sisters we properly bicker a bit too much, usually about the most trivial of things. In terms of physical fighting we got all that over with by the time we were 16. I do remember the last physical fight we had around that age, it was Christmas eve, my mum had gone out to collect some relatives & they were due to come back to our house for a meal & in the meantime a long long fight had broken out between me and Jez. All the family then came back. In the process of this fight we’d managed to destroy most of the living room & some furniture. The relatives & my mum arrived back with looks of horror on their faces, we just stood there with bashed up faces/torn clothes wishing them ‘Happy X-Mas.’

Describe the sort of film your music would fit in most perfectly. What genre? What images come to your mind? Maybe even actors?
Maybe some 70’s escape film – Escape From Alcatraz, Midnight Express or the 60’s Prisoner series, Patrick McGoohan & Julie Christie would star in it.

Would you rather be a dragon or have a dragon?
Be pretty cool having a dragon in the garden shed.

Would you rather whisper or shout for the rest of your lives?
Whisper

Did you ever have alternative career plans besides being musicians?
Well, I went to art college, but not sure that was ever a viable alternative career path. I think we’ve both known from an early age music is what we wanted to do, we’re pretty much unemployable in most other areas.

You’re about to support NOEL GALLAGHER on his tour. Favourite OASIS song and why?
Live Forever – I like the ‘You & me vs. the world’ spirit on it, but also love how it manages to be melancholic at the same time.

What can we expect from the album? On which journey (or cruise) are you taking us?
After we finished the album we were both talking and trying to make some sense of what all these themes of travel meant, we both thought on listening back to it, it is almost like the album tells the story of an immigrant leaving his country to travel somewhere new, hopefully to a better place.

I have to ask this on behalf of all the DOVES fans out there… how are the chances that you and Mr. Goodwin will team up again somewhere in the future?
Sorry, I can’t give you a percentage. Our total focus is on BLACK RIVERS, but never say never in the future.

What roles do the words ‘hope’ and ‘passion’ play in your life as artists?
Both are important to us, passion within music is all important, it’s what drives you forward, keeps you excited, keeps you writing new songs and hope is important especially in these hard days of the music industry!