Interview: The Perks Of Being Brandon Flowers 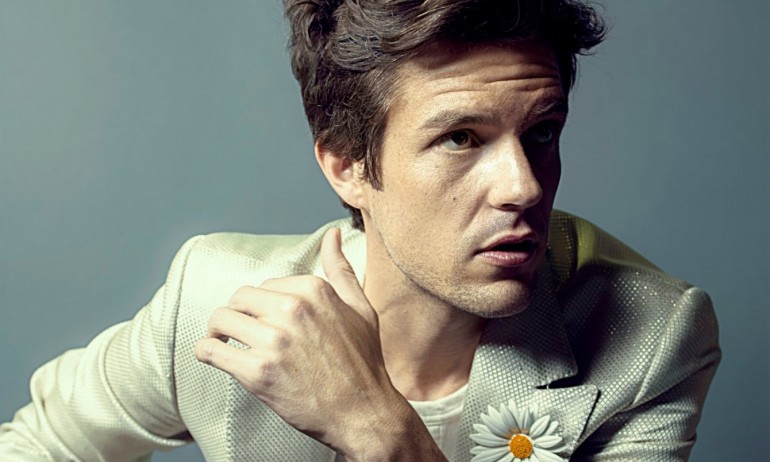 Once again, the acclaimed ‘indie music class of 2005’ is back in the media as the tenth anniversary of that musical wave is celebrated with a certain amount of nostalgic feelings, it seems. NOTHING BUT HOPE AND PASSION already reflected on this historical period last year. It feels like every band from that period is facing various creative struggles these days. FRANZ FERDINAND re-ignited their musical spark by recording a record with SPARKS, MAXIMO PARK are about to tour their debut album this year while BLOC PARTY are currently recording a new one with a changed line-up. Not much is left of the furious glory of those golden days and America’s big indie music players of the year 2005 are currently taking a break after hitting a musical dead-end with their questionable 2012 album Battle Born. Even THE KILLERS needed a bit time off to find out if the world still needs them, one decade after Mr. Brightside. The question remains unanswered for now.

Still, frontman BRANDON FLOWERS isn’t thinking about an early retirement these days. Five years after his debut solo record Flamingo was released back in 2010 he unleashed a second album back in May called The Desired Effect. Besides the album’s basic 80s disco vibe it characteristically features a sample of BRONSKI BEAT’s Smalltown Boy as well as guest appearances by PET SHOP BOY Neil Tennant and Danielle of the HAIM sisters. In the midst of his massive world tour NOTHING BUT HOPE AND PASSION met THE KILLERS frontman in Cologne and discussed with him how the collaboration with producer Ariel Rechtshaid came about, his role as a solo artist, and the progress of his sound.

Your new solo album The Desired Effect is produced by Ariel Rechtshaid whose work as a producer and writer contains a diverse body of music from Vampire Weekend to Madonna. How did your collaboration with Rechtshaid come about?
My buddy and guitar player is sort of a session player in Los Angeles. He plays a lot on people’s records and so he’s been asked to play on records that Ariel has produced. And then he was telling me that this guy is good and so I called him.

How did the writing and recording process of the album go ahead?
I made a lot of demos and they have strong identities. However, I only make a minute and a half long demos. I don’t flesh it out completely but you know what it is, you get it. I made fifty of those and Ariel would just go through them and pick the ones he liked the most, the ones that fit in with what he was going for and then we would work on them.

‘I can use whoever I want to on my solo record’

Does writing as a solo artist give you more freedom and space to try out a few fresh things?
Yeah, you’re always gonna be somewhat inhibited in a band. You know, first of all if you have a bass player you would primarily use that bass player, if you have a guitar player you use that guitar player and so on and so forth. In my case I can use whoever I want to on my solo record and that’s really nice.

On I can change you sample the synth riff of the BRONSKI BEAT classic Smalltown Boy. Still, it sounds like a classic Flowers record in terms of its strong chorus as most of the new songs happen to be quite chorus-centered…
Yeah, well, not all of them. Digging up the heart for example has a lot of verses and a lot of pre-chorus before you get to the chorus. But the chorus is worth it when you finally get there. It’s my favourite one to do live. 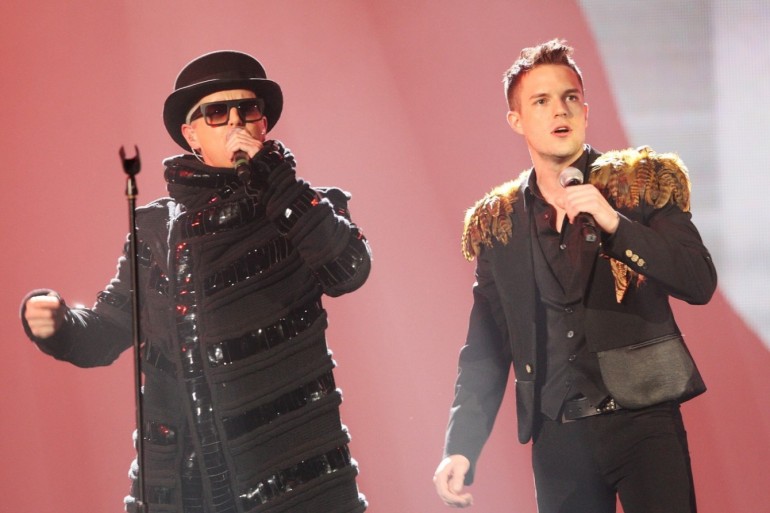 Fanboy and Friend: Brandon Flowers performing with Neil Tennant back in 2009
(Photo by Dave Hogan/GETTY)

Well, you can’t get the love for the 80s out of the musical microcosm of the American gentleman. He has been recently announced as a feature guest on the forthcoming NEW ORDER comeback record Music Complete and he surely never made a secret about his love for bands like the PET SHOP BOYS. He performed with them in the past and singer Neil Tennant is also featured in form of a spoken word line in I Can Change. Collaboration plans? ‘We just haven’t really talked about it but I would definitely work with those guys’, FLOWERS told us. No, the man has never been your everyday garage rocker, he was always meant to be a dandy, a good old-fashioned entertainer with charm.

Maybe being labeled as ‘indie-rock’ was one of THE KILLERS‘ biggest problems in retrospect. Remember when everybody was suddenly surprised about the pumping disco cheesiness of Human? It didn’t came out of the blue. BRANDON FLOWERS thinks big and partly even cinematic. ‘I mean it’s a big part of it and it’s always made sense to me,’ he explains us his love for big music video gestures. He continues: ‘I’ve always associated people’s music with the way they look, the font of their band name, the videos, or the concerts.’ His latest record The Desired Effect is an approach to combine all these ambitious fields into one big adventure.

THE KILLERS’ debut album Hot Fuss celebrated its 10th anniversary last year. Since then, you have constantly developed your sound. Being an artist, do you consider change and progress strong indicators for your creativity?
Well it’s nice to switch things up and I’ve taken in so much music that it’s hard to say what’s gonna come out when you go into the studio. I guess it’s a testament to how much music we love. But there’s also something very recognisable, maybe it’s my voice. Still, it’s tough to really pin it down how we are and why we’re like that.

In a recent review that discusses your gig in Berlin the author assumes that you probably have not much to say to the audience that became a fan with Hot Fuss anymore. Does the comparison of your solo output with the discography of The Killers get on your nerves?
I don’t know. I was 18 or 19 years old when I wrote Hot Fuss and it’s about different experiences and taking more in. You know, you just don’t make the same album twice. It’s impossible. And if I tried to it would be weird. Did he say the show was good?

It’s hard to figure out whether or not he liked the show. It’s not that he commented on it that much or that he shared a clear opinion.
So maybe if he liked Hot Fuss, he just liked 2004.

Well, on the other hand it’s something one may appreciate about your music. It develops and you grow with it.
Yeah, I think a lot of people have grown with me. They have come along for the journey, have had similar experiences and can relate to the new songs. If we all went back to being 19 years old, maybe we don’t want The Desired Effect as it definitely sounds different. However, I don’t cater to eighteen-year-old girls, you know, I can’t, and I can’t think like that.

You’re undertaking a massive world tour throughout Europe and the States. How does touring as a solo artist feel like?
Well, the gigs and the crowds are smaller and we’re not as loud or as powerful as THE KILLERS but the songs are strong. I don’t have the experience with this band than I have with my main band. We’ve played a thousand shows together so there are gonna be differences but I want to stay focussed on the similarities, so I’m performing and celebrating the record that I’ve made.