Bad Dates and the Berlin Wall: Small Talk with Matt Mondanile of Ducktails

This charming man is just too lovely to not have him over for a little small talk. NOTHING BUT HOPE AND PASSION first met Matt Mondanile last year at Immergut Festival, when he was touring with his Band REAL ESTATE (and filled out our very own Friendsbook in the funniest possible way). Now, as Mondanile is about to release the new record St. Catherine with his own band DUCKTAILS on July 24, we sat down again with this charming man at the same festival. And like it’s often the case on these kind of occasions: It’s not a typical interview situation, one word leads to another and suddenly you end up discussing everything but the upcoming release – hey, that’s what everyone’s doing anyway. So we just let ourselves get carried away by talking about general differences between his bands, Mondanile’s youth and education, his parents house and awkward date situations. Enjoy the chat right here.

You were performing at the main stage of Immergut Festival with your band REAL ESTATE last year. Now you’re back on tour with your own band DUCKTAILS to play smaller shows around Europe. How is it to be back here?
It’s so great to be back, its a wonderful festival. A little colder this year – I’m freezing right now – but still sunny, so that’s nice. Yeah, I am used to play bigger stages with Real Estate and with this band I now play smaller shows, but both of them are good in their own way. I actually prefer normal shows in clubs to festival shows, simply because it sounds better inside. But this Festival is small and very intimate, so I’m really excited for tonight.

You probably hear this a lot, but DUCKTAILS is a funny name, isn’t it? Are you into comic books?
Ducktails is a dumb name. It really has no meaning. But yeah, I used to read a lot of comic books, I collected them as a kid. My favourites were the obvious ones – X-Men, Spider-Man – I have tons of them, but other ones I like too. I still have them all, I keep them in my parents house in my room, in a huge closet.

So you still have your room at your parents place?
I still do, yeah. I am going there after this tour. I haven’t been for half a year, so I’m really looking forward to it. My parents live in Richwood, New Jersey, which is far away from L.A. It normally takes 6 hours by plane, so I don’t have too much time to visit them a lot.

When did you move out of your parents place? Was it for the band or other reasons, like studying?
I moved out of my parents house when I was 17 or 18. I went to boarding school for two years, and after that I went to Hampshire college, Massachusetts. There I studied literature, history and art for four years. It was kind of a school where you study all different things, very progressive.

What was your thesis about?
Actually my thesis was on the fall of the Berlin wall and dealt with the topic of certain aspects of memory, mostly social memory, like, how the Tv and all the media was different in the east, and how people from both origins now remember this historic event in a different way. 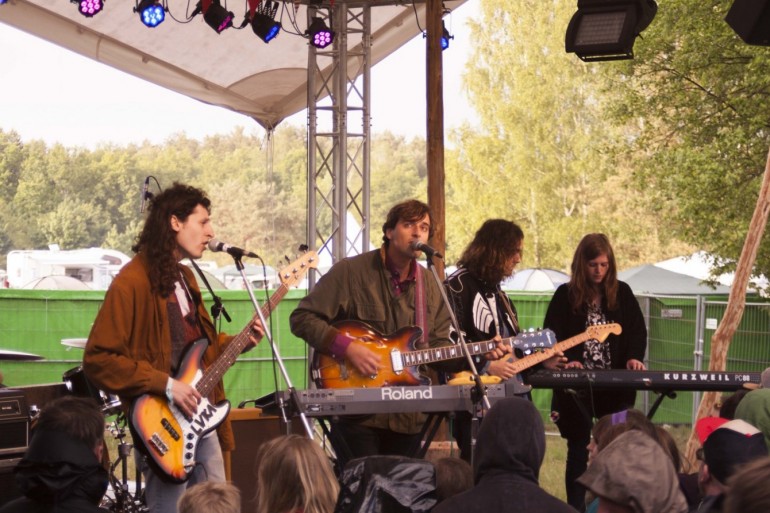 Did you ever have a really bad date?
Sure. I went on a date in New York with a girl where we went to a museum and then had dinner but we didn’t really get along. We were eating together and decided to just part away after that, just leave. I mean, we said we’ll meet up later but you know, we never did. We just didn’t have anything in common, it was hard to talk to her about anything, same for her I guess. It wasn’t very good. We didn’t really discuss it but both assumed that we just knew that it wasn’t going well without speaking about it. You know what I mean?

Yeah, if you don’t really get along, a ‘proper’ date with dinner can be the worst…
Dates are really awkward, you know. Its better when it’s not really a date, but you just hang around, maybe with other people. That’s nice and more relaxing. However, the food we had was great.

Something at least! What’s the best food to get at a restaurant? And how do you deal with the food situation on tour?
Ah, I love to go to a nice dinner and get good food. I really like a good steak. Not medium rare, medium. On a festival, it’s nice to get vegetables, a hot meal, but they generally have nice food. When we are on tour, I dont really get anything on the way. I am so grossed out by all this trash food. I just get an apple or something. Healthy stuff. Actually, the only thing I have eaten today is an apple. But we are about to get dinner now.