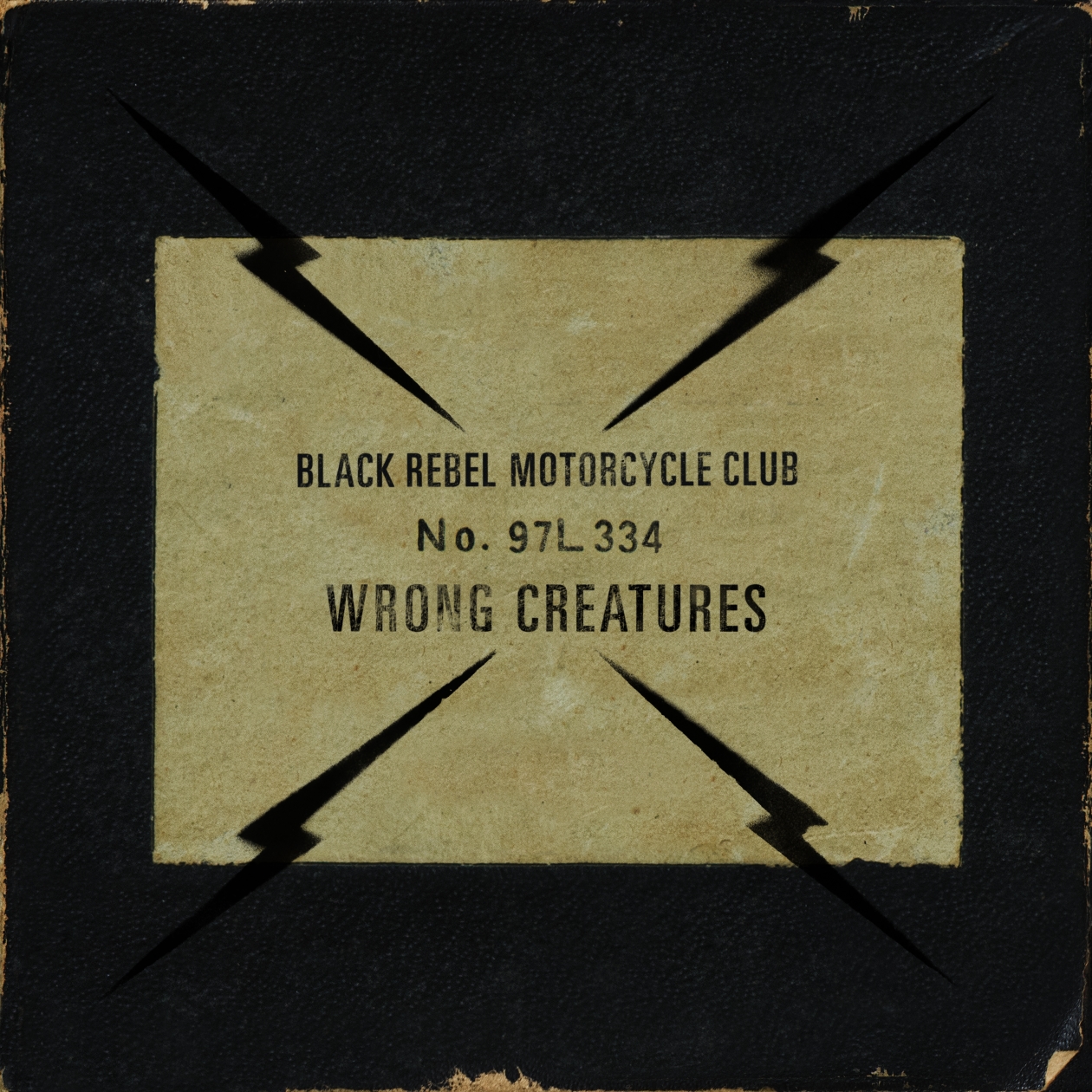 You can simply not go wrong with this album. The only wrong creatures are the bleak souls that never got a taste of genuine rock’n’roll music.

There is not a whole lot of bands out there that go from one album to the next with as much dignity and humbleness like Black Rebel Motorcycle Club do. And a great deal of care for their sonic journey on top of that. When it comes down to their career, the L.A. based trio has never chased anything, but the true spirit of their musical roots and this place deep down inside of them that intertwines with it all perfectly. Even if that means turning your soul inside out and dragging your heart and mind to some dark places along the way. Thankfully, Robert Levon Been, Peter Hayes and Leah Shapiro did it again on their new album Wrong Creatures. The result couldn’t sound more promising.

After burying themselves deeply in their creative refuge „The Bunker“ for a little while, the band now returns with twelve songs that beautifully seem to capture a nuanced musical spectra that confidently highlights their musical strengths without neglecting their ever-present soul-searching, doubts and fragility, too, that have always been a part of BRMC from the beginning. While King of Bones and Little Thing Gone Wild easily stand out with their urge, volume and fierceness that is hard to resist (but why would you anyway?), the more extensive as well as introspective tracks like Ninth Configuration or Echo are reminiscent of the band’s longing to explore their sonic and emotional insides to an admirable extent. All while raising the essential Question of Faith instead of evading the issue. After two decades of doing exactly that and being authentic to the core, Black Rebel Motorcycle Club never lose sight of that for one second no matter where their musical endeavour takes them. (Annett Bonkowski)

Song to get you started: King of Bones
Stream it now: ► Spotify / ► Apple Music / ► TIDAL 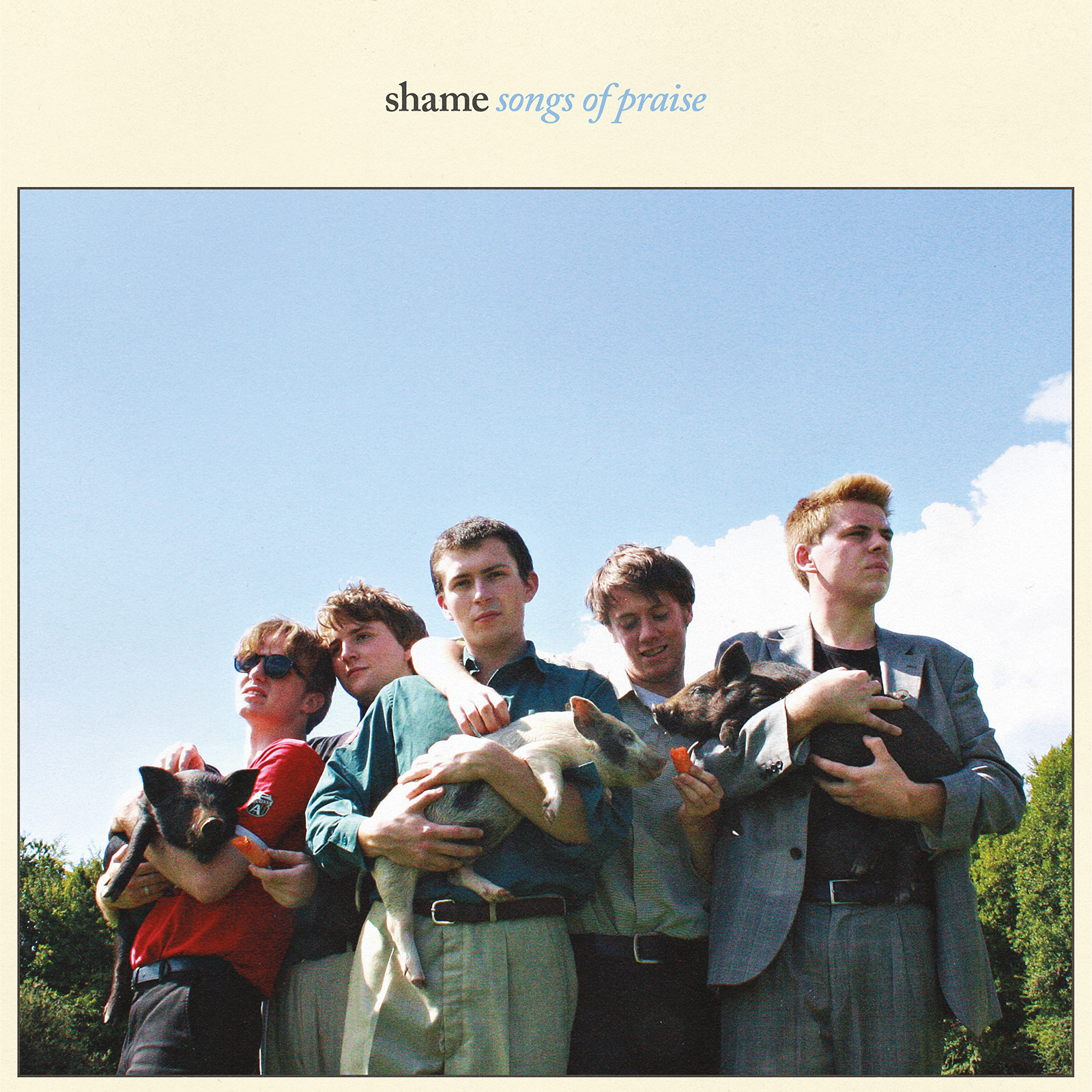 The first important debut album of the year mixes some of British indie rock’s finest ingredients to a delicious meal.

Within the blink of an eye, Shame are turning the uncertainty of the noisy rumble in their album opener Dust On Trial into a furious garage rock extravaganza. Right from the start of the long awaited debut album by the lads from London, the urgency is sensible in every note. Leading man Charlie Steen screams and shouts, sometimes with a dark baritone, sometimes with hasty spoken-words attempts but never clear and posh. His vocal work takes the best from Iggy Pop, Liam Gallagher and Pete Doherty while his band supports him with a none-stop firework drums, bass and guitar. Sometimes the tracks head more for post-punk territory (Concrete), sometimes they are just dirty punk sketches (Donk) and in tracks like One Rizla and Friction Shame show that they could also do a proper pop melody… if they want to.

Arriving over a decade after Britain’s last big indie rock wave Songs Of Praise does indeed recall some of the county’s past heroes although the band himself isn’t actual influenced by The Libertines and Co. as they told us. They leave it up to the audience to name the references as they prefer to simply play their furious punky little gems, documenting the absurdity of being in your early 20s in the current political climate of the world. Steen calls for ‘Something that’s relatable not debatable’ in The Lick as he mixes frustration with desperation and slices of humour every now and then. Yes, we are fucked, the world is a mess but it’s not the end, right? ‘Find your happy place’ Steen sings in the partly melancholic but also epic closing track Angie, ending this debut album on a surprisingly optimistic note. Not everything is lost, also for contemporary rock music. All hail, Shame! (Norman Fleischer) 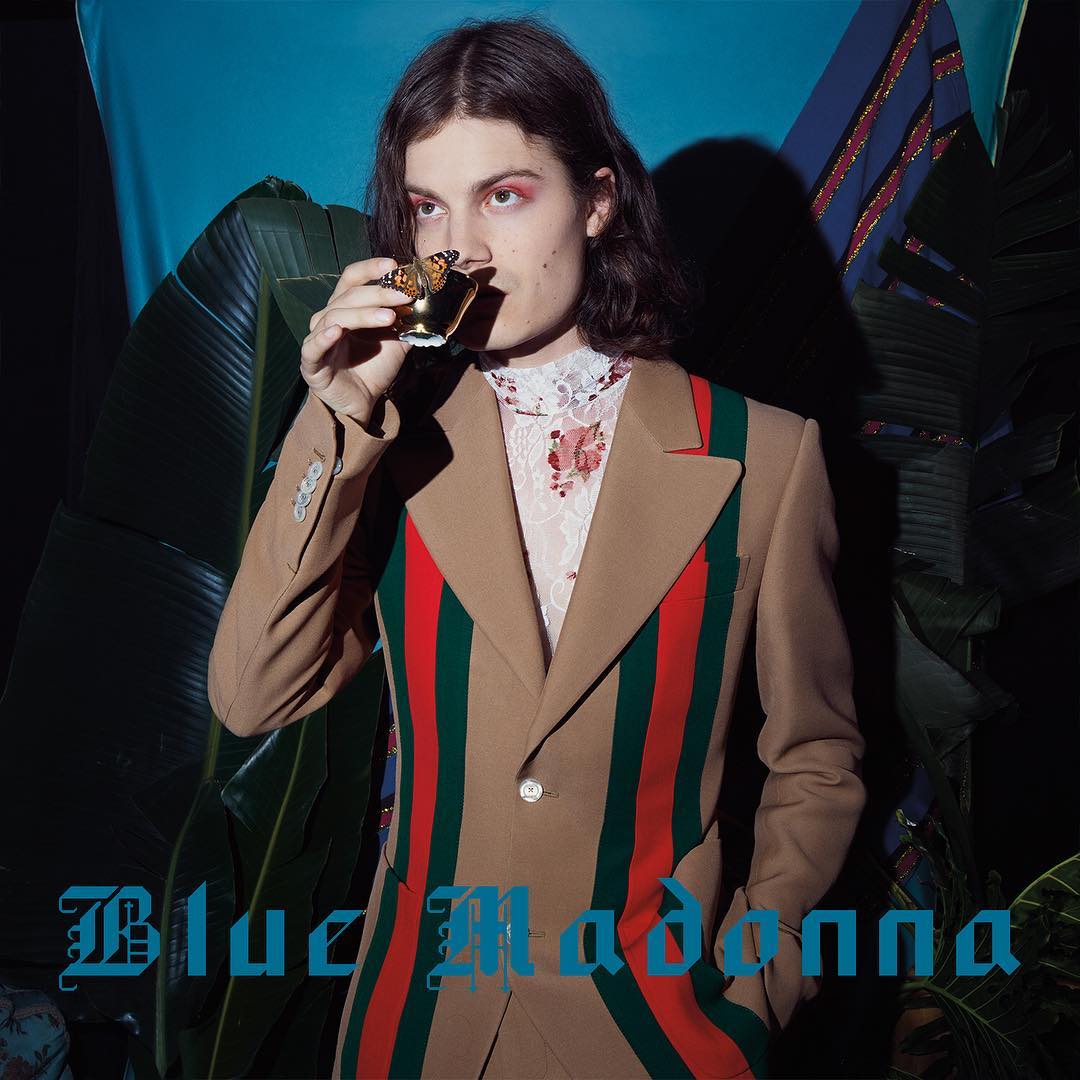 Luckily for the 26-year-old singer, he’s not interested in being labled as a one hit wonder with this one.

Garret Clark Borns, simply known as Børns, comes back with the difficult second album – a challenge for every artist to proof they are not just lucky when it comes to get a hit, but actually are talented musicians. His abilities speak for themselves on this one. After a darker but playful debut album, the singer takes us again on a supernatural journey with Blue Madonna. The cool thing about it: it is not the kind of spacy place you’re in when the bass gets so heavy you do not remember your own name. It is the one you lose all weight and just go with the flow, totally satisfied. The ride starts extremely enthusiastic and with a banging highlight – opening single God Save Our Young Blood was released just a few days ago and features no other than Lana Del Rey herself. A masterpiece of alternative synth-pop with a healthy portion of candy to it. Vintage-rock orientated Faded Heart brings even more nostalgia to a superb start to an album full of warm coolness.

‘The idea behind a Blue Madonna reminds me of innocence, purity, virginity – but at the same time there is something sad about it’, the singer explains. ‘That is perhaps the biggest intention of the album: to maintain this innocence.’ And so Blue Madonna explores the different stages of admiration (Iceburg, Tension), freedom (We Don’t Care) or frustration (Supernatural) on an easy level, perfectly to sink in without the fear of drowning to deep. A fine piece of modern, young pop – outstanding not only for its atmospheric sound, but also for Børns’ high tones. Pop, in which the always discussed additional term ‘alternative’ fits just right. (Kai Hermann)

Song to get you started: I Don’t Want You Back
Stream it now: ► Spotify / ► Apple Music / ► TIDAL

The Lone Bellow – ‘Walk Into A Storm’ 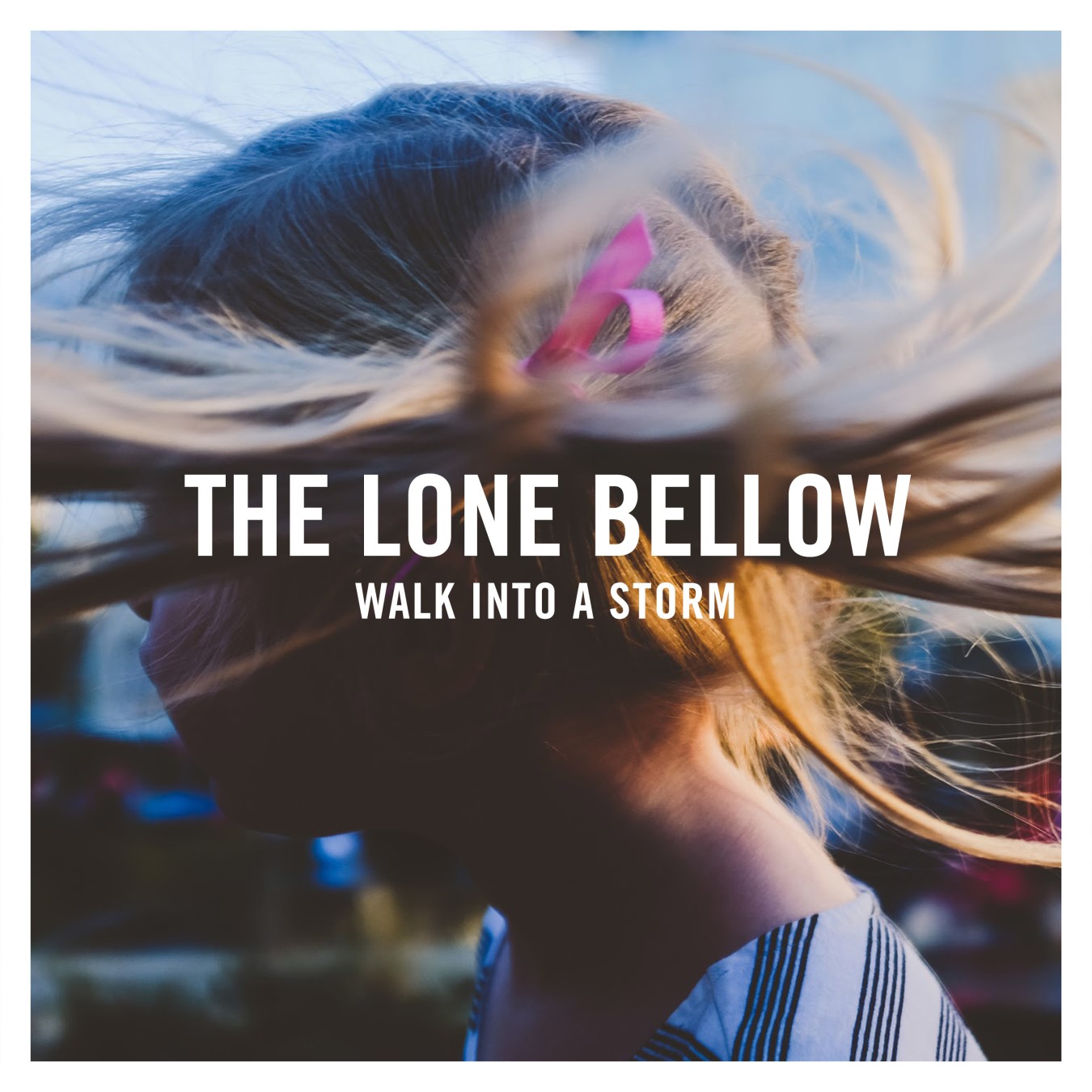 The Nashville-based trio released the first single Time’s Always Leaving of their new record already in August. A good choice, since this uplifting and forward dashing song is one of the stronger ones with it’s gospel-like backing vocals and marks a highlight on the record. The uplifting songs on Walk Into A Storm stand out between the mostly well arranged but slightly
cheesy folk pop ballads. Whereas on the up-tempo tracks like Time’s Always Leaving, Feather or Can’t Be Happy For Long The Lone Bellow‘s compositional creativity results in a round and fitting sound, the string arrangements and piano lines tend to be a little too much on the slower and more sentimental ones.

Not seldom it seem like the band doesn’t know where to put all the bursting passion and their three outstanding voices, which harmonize perfectly when used at the right spots. The mostly beautiful vocal lines sometimes get lost in overwhelming lofty endings. A surprising souly harmony change every now and then lightens up this otherwise quite foreseeable songwriting. You end up asking yourself more than once ‘Don’t I know that melody from somewhere?’, like the bitter-sweetish string melody at the end of May You Be Well. But invention hasn’t been the band’s strongest feature anyway which is not a bad thing in that musical territory. The essence of The Lone Bellow is rooted in their authenticity and the joy of playing what surrounds the band not only on this record, but also and even more while performing. Walk Into A Storm is a delicate record made to be performed live and one to let the audience be sought in by the raging passion and authentic love to their art that the band showcases on each of the ten songs. (Abhilash Arackal)

To Kill A King – ‘The Spiritual Dark Age’ 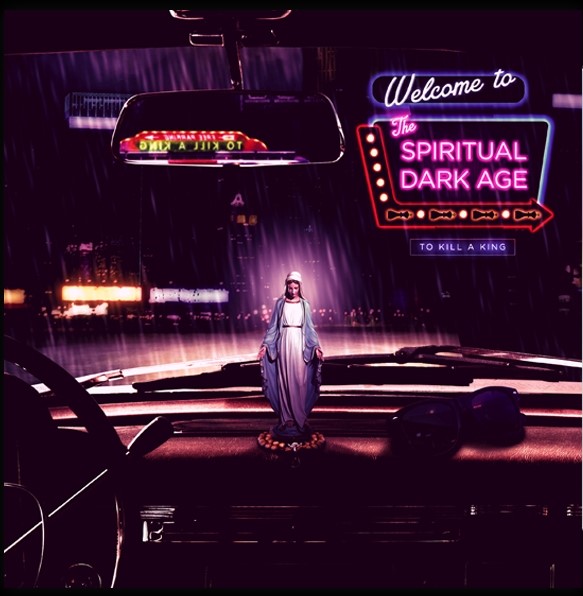 Three years after their last album, To Kill A King now welcomes us to their third LP, wich manages to balance a typical sound image with new and fresh influences.

The band has changed, sounds new, without loosing their original charm and vibe for which we enjoyed 2013’s debut Cannibals With Cutlery. However that’s not enitrely a bad thing as the new album sounds like a symbiosis of their debut and its self-titled 2015 follow-up: big, atmospheric, nearly orchestral folk sounds mixed with an old-fashioned indie DIY attitude and sharp guitar riffs. Furthermore you sometimes hear more modern influences, synthies and electronic drum kits, which is unusual for an indie-folk group, but works very nice with the traditional style.

Some tracks on The Spiritual Dark Age are more peaceful, some more marching, while the title track and album opener comes as a folk rock hymn, the second track The unspeakable crimes of Peter Popoff sounds is a charming feel good indie tune. Throughout the whole album you often get that familiar To Kill A King song scheme of calm and reduced verses followed by an impulsive and full loaded hook. It works way better than on the predecessor as mastermind Ralph Pelleymounter, who’s dark and intense voice is definitely still the central figure of the group, sings about death and religion and, of course, love. To Kill A King remain an underrated source for gloomy folk hymns, delivered with charm, attitude and a lovely dose of dark humour from time time to time. Some tracks might feel a bit overloaded, but that’s probably because they unfold their full intensity when played live and not on your headphones. All in all The Spiritual Dark Age is a powerful third album for all the existing fans and those who could easily jump on board for this one. (Elia Schick) 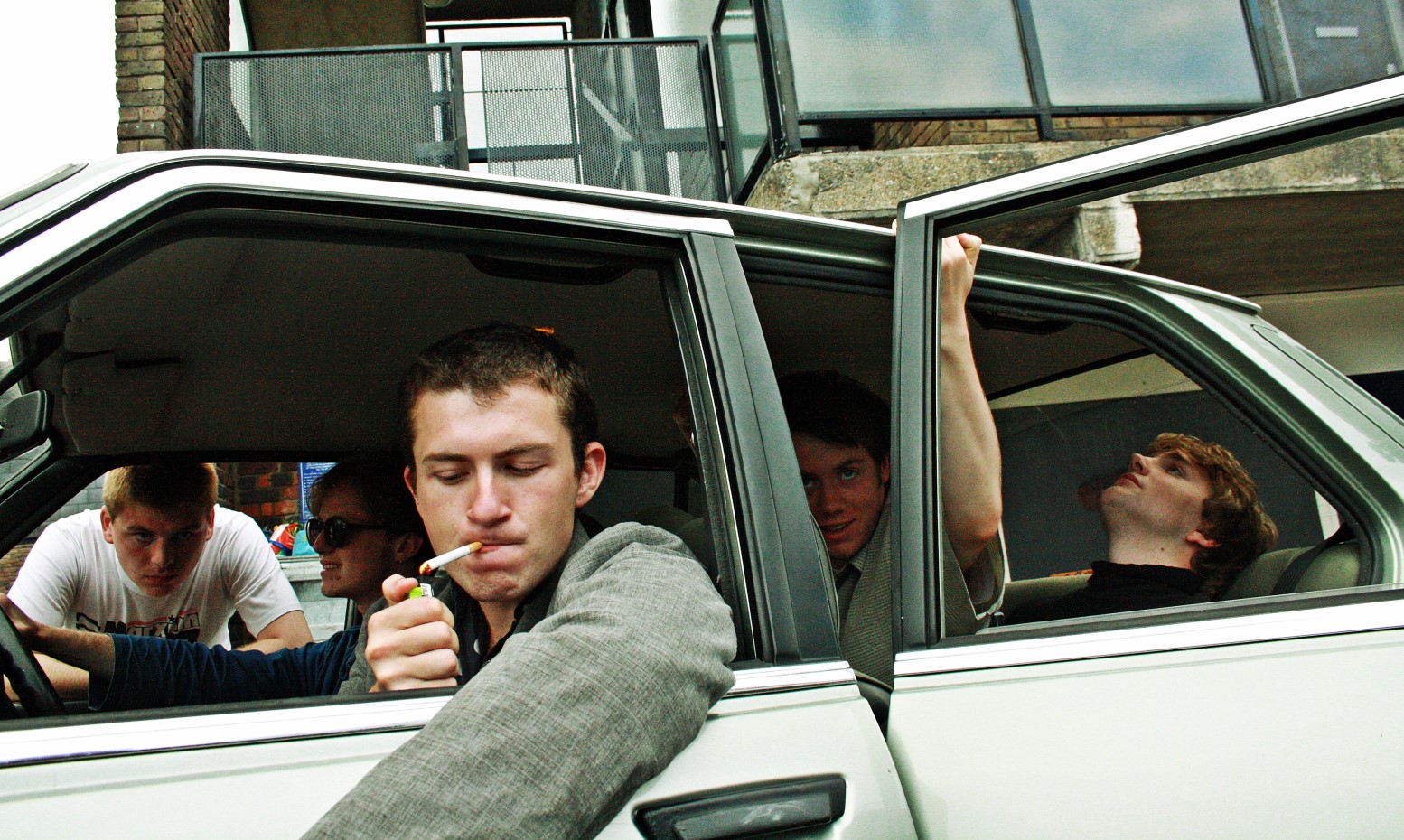 We've been following these young gentlemen around for quite some time. Now that Shame are finally releasing what turns out to be one of the finest debut albums of indie rock in recent times, it's time for another reminder of their greatness, kids!