Quo vadis, Queen of Pop? Madonna and her ever beating Rebel Heart 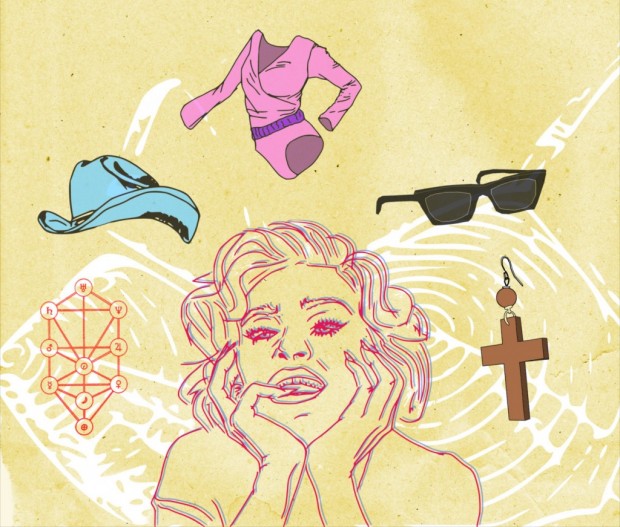 She is one of the most successful artists on the planet, a revolutionist in the 80’s and the role model for pretty much every female pop star of the past 25 years. She pushed boundaries in the music industry like no other woman. There were highlights in her career (from girly beginnings with ‘Like A Virgin’ to her mature transition on ‘Like A Prayer’), career crashers (the release of her controversial, yet derided ‘SEX’ book) and another thing for sure: no ending. Or should there be one? In the haze of MADONNA’s new LP ‘Rebel Heart’ NOTHING BUT HOPE AND AND PASSION is risking an analysis.

Still something to say

Twelve longplayers, more than 200 awards and nine massive concert tours. There is no doubt – MADONNA is one of the few special singletons in pop culture and proved it many times. Her achievements are big, we won’t bother you with a detailed look on her biography. You all know here, at least in bits and pieces. Still, during the last few years a certain uncomfortable aura haunts the singer: Media and the public eye started to focus more on her persona than her artistry, bashing her obsession with youth, as she still shows plenty of skin with growing age, her preference for younger men and above all acting a  bit like she is still in her twenties. The question came up, if the ‘queen’ destroys her own legacy by still trying to be the sex symbol she was almost 30 years ago. But another inquiry should be, if her continuous search for provocation and self-portrayal does not outshine the fact that this woman still has something to say. Or at least wants to.

Who does not remember when MADONNA walked into a ballet studio, covered with a tight pink leotard, dancing to her ABBA-sampled Hung Up? With the release of her tenth studio album, Confessions On A Dancefloor, ten years ago, she brought disco pop back to the airplay and clubs. It must have been around that time when the discussion about her look begun. Her body came first, her music second. Still, the album was a commercial and critical success. Its accompanying concert tour was recognized as the highest grossing tour by a female artist ever. As an artist, MADONNA proved once more her mutability in musical styles and talent for reinvention. As a well-known provocateur, she kept the media’s attention during the whole process of criticism about her age and stage performances. 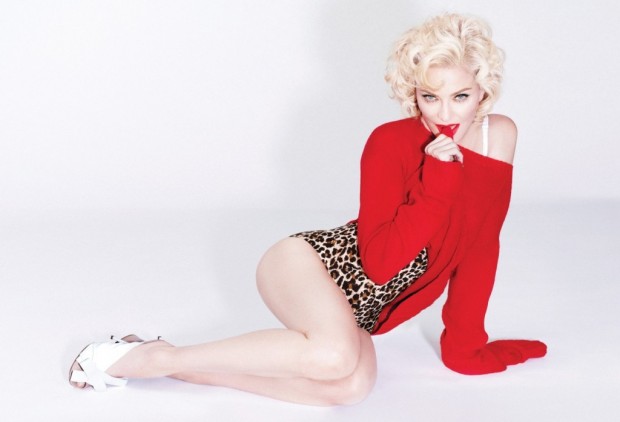 Two years later the debate reached a new climax when the singer put out her eleventh album and showed herself as a masochist in black leather on its artwork. With 49 years then, she played with her body similar to her Erotica era in the early 90’s. Not bad: MADONNA again became a central topic in the press, her R’n’B orientated Hard Candy a chart topper.

Too bad, her fight against the own age caused a crash in her authenticity as an artist.

It did not only seem like the woman tried to become again the girl she was at the beginning of her career. Her search for youth also had a negative impact on her music: while former works were always considered as a different artistic facet of the singer and a huge innovation for pop, Hard Candy offered no stylistic surprises at all, despite hit singles like 4 Minutes or Give It To Me. She stopped being the trendsetter and followed others, in this case TIMBALAND who had massive streak of success between 2006 and 2008. What was left in the end were the numbers: with an earning of over 400 million dollars her Sticky And Sweet Tour is one of the five most successful tours by an artist of all time. It even broke the record of her previous concert run.

No space for surprises

So far, so good from a business perspective. The lady proved again she still plays in the high class, but not due to her music. It took her four years to release another full length-album. In the meantime TIMBALAND vanished again and made space for DAVID GUETTA. House and electronic music took over the mainstream and a certain LADY GAGA turned up and conquered the world by storm. Out of nothing she was MADONNA‘s strongest rival, basically because she felt a bit like a younger version of the Queen of Pop (but that is a whole different topic). Anyway, in March 2012 the artist’s twelfth studio album hit the stores with average sales. Compared to its predecessors it was a commercial flop. This was rather sad as the EDM inspired MDNA had some good and catchy stuff on it, without trying to be more than a solid pop record.

As suspected, her performances caused more of a scene than the music: her 2012 Super Bowl halftime show was the most watched TV event in US history, the ‘MDNA-Tour’ became the second most successful tour by a female artist of all time. Guess who is on the top of the list?

So, after this fast ride through her latest projects it becomes clear that even in her fifties the artist is still able to run the game. The question is for what price? Reinvention or innovation are gone for good, that much has become clear. In a time where we have seen and heard almost everything, there is no space for surprises. And when it comes to MADONNA, no one is shocked anymore when she shows her nipple or ass on the stage. On the other side we sense some double standards in society right here. Strangely enough, it still causes kind of a scene when an adult woman rubs her body against her twenty something male dancer. If we switch genders sadly no one would care. Is age itself a provocation in youth-focussed pop culture? And as you know the queen provocation is not a temporarily thing for her, it has always been a recipe for success… for any artist ever since Elvis shook his pelvis in the 50s. 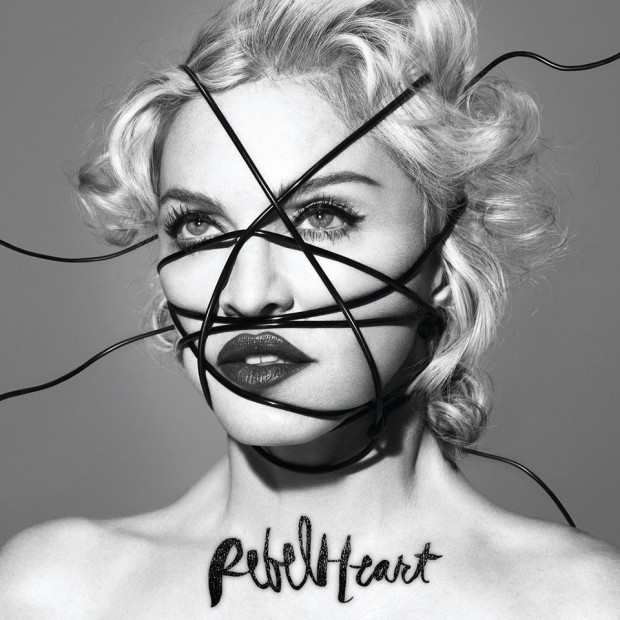 Another important issue here is MADONNA‘s artistic base: do not forget she started in the mainstream-focussed pop business and is still deeply located in it. You won’t make a PATTI SMITH out of her anymore. Of course there comes the problem with age, considering the fact that music and culture in this genre have always been about youth and fame for a certain limited amount of time. There were one-hit-wonders, former stars became icons or… well, just forgotten. Generations of the 80’s or 90’s vanished from the screen or changed their roots from wild to sober. Who is seriously left off the 80s besides DEPECHE MODE, the PET SHOP BOYS and a handful of others? Relevant is none of them anymore, even MADONNA. But that’s okay. Obviously the singer tries something different by following today’s trends (including social media) and capturing it in her music.

There are not many artists in their fifties working with people like AVICII, NICKI MINAJ or KANYE WEST. Or who are photoshopped to such a massive extent (really, on her latest promotional picture she looks more like MILEY CYRUS than herself). It might be the reason why some of us are surprised or confused by her acting and self-expressing. Because we are just not used to it. We haven’t experienced it before. Getting old in pop music and sticking to the genre is still a new thing just like JAY Z and SNOOP DOGG are the first generation of rappers that will grow old while trying to stay relevant, even when they are about to hit 50 in the next years. And in this field MADONNA quite ironically becomes a pioneer again as she leads that generation of pop stars. It’s a cynical sign of our society that we prohibit these artists to follow their profession just because they are not 25 anymore. Why should we stick to those obsolete stereotypes?

Numbers do not lie

So yes, there will always be people saying she is retarded and should finally go on retirement. You know what? She won’t do it because with all respect – she does not give a fuck about these people. Bitch, I’m Madonna is the title of one of her new tracks. Enough said. She wouldn’t be where she is today if she listened to all those voices criticizing her. Yes, she gets older and her performances on this year’s Grammy and BRIT awards were a bit stiff, but this woman still believes in what she is doing and maybe this should be the more interesting fact. She’s not giving up and neither does her global following. She’s a rebel with a cause… and that’s the ultimate level of provocation.

By the time you read this article MADONNA will put out her 13th studio album, Rebel Heart. Due to an illegal leak of unfinished demos, six songs have been officially released on iTunes earlier in December, with three of them reaching number one in over 40 countries. An upcoming world tour is already scheduled. Does the world need another comeback from the ‘Queen of Pop’? Surely there are contrary opinions on that. The chart performance of her newest album will definitely speak for itself. And if it won’t the ticket sales will. Don’t forget that she’s got a contract with Live Nation and was the first big artist to get one. Quite an innovative decision. Because in the end, numbers do not lie. And in the case of MADONNA, they have always been big.