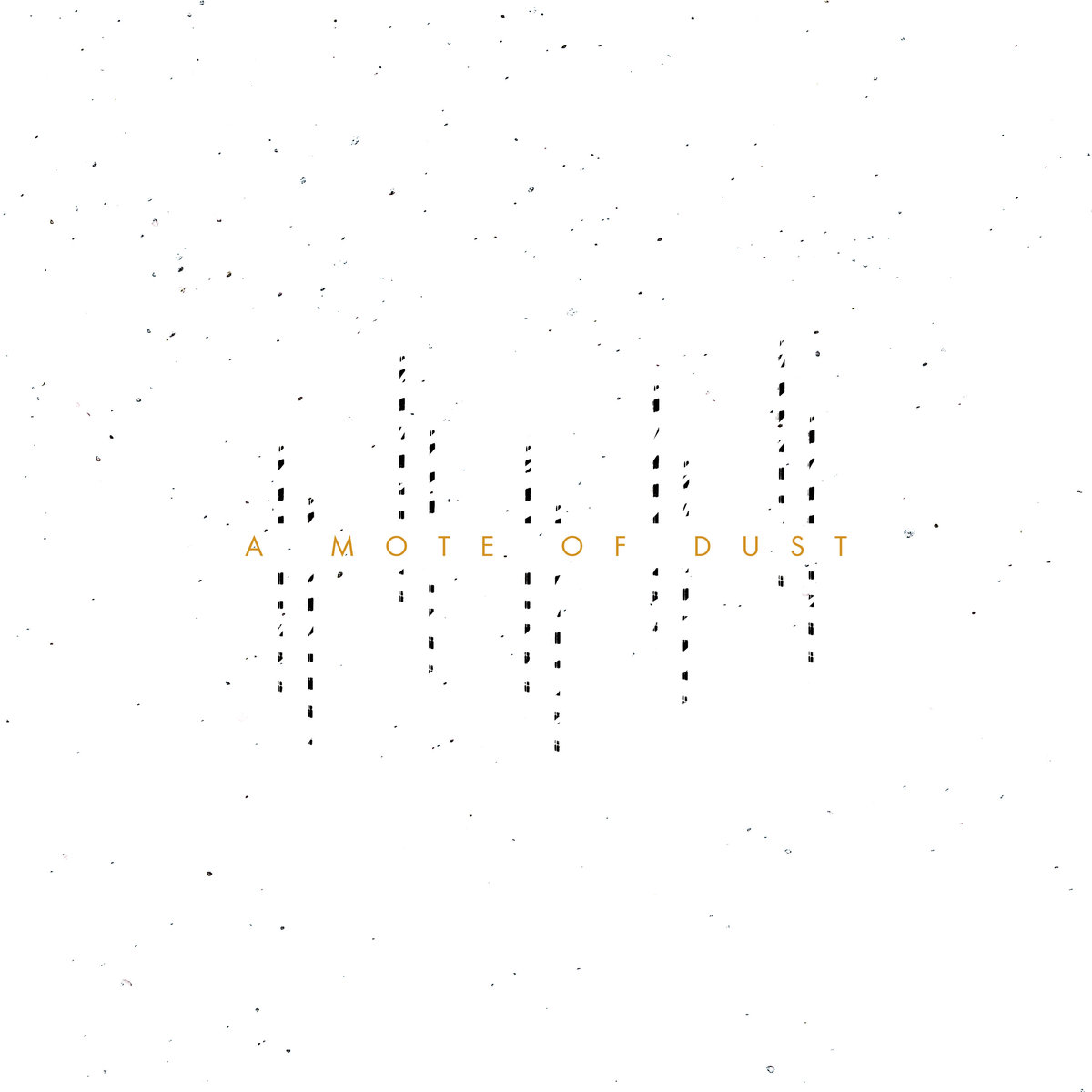 Sounds like … an ingel and a fine whiskey in one of the last cold nights of winter.

Craig Beaton is not the guy for solemn goodbyes. His second album as A Mote of Dust, and his last one for at least a while, as we learned, is aptly called II; it comes in a minimalistic white, almost hopeful package; and on it, Beaton sings us songs in that clear, soft but unyielding voice that became his trademark. Ever since Aereogramme shook rock music with their unprecedented mixture of noise and beauty, Craig Beaton tried to channel that in every one of his creative outlets. In its essence, it is a crystal clear voice upon brooding turmoil. And II gives us a last testament to how fragile, yet rich Beaton can make that sound.

Recorded and produced with his longtime collaborator Graeme Smillie, the project A Mote of Dust was intended to reduce the silent Aereogramme and Unwinding Hours-moments even more. But in comparison to I, songs like Slow Clap resemble a bit of the Unwinding Hours-drive. There are no actual Aereogramme-outbursts, but the build-ups seem to make them imminent. There’s more guitars, more synths, more rhythmic drive. In the end though, it’s still the beauty of the void in songs like Cease and Wintersong (aptly the two last ones) that make this record a typical Craig Beaton one. With this, he leaves us to ourselves, but he’ll always be there to coat us with his songs. Maybe, one day, even with new ones. Until then, II sparks sheer gratitude in the dedicated listener. (Henning Grabow)

Dancy beats, catchy choruses and poppy melodies. That’s what the second VÖK record In The Dark is all about.Whereas the Islandic band’s debut album Figure is at some points experimental and sometimes not that accessible, they now decided to go fully into the catchy pop direction.

This new approach is recognizable from In The Darks start to it’s end. The opener (which carries the album’s title) is an electropop hymn with easy melodies, chords and lyrics. From the first listen on you can sing along and repeat the melody in your head: ‘I better toughen up/oh no/ don’t wanna hide no more in the dark’. This scheme is repeated all along the eleven tracks, exactly as we expect it from good electropop. One of the most outstanding songs is Spend The Love, a bassy dance track that deals with peoples consumerism. In The Dark could definitely catapult VÖK into the mainstream pop charts. It’s catchy tunes, danceable electro elements and singer Margrét Rán’s clear voice are able to reach many people out there and get stuck in their head for a while. Now, that’s the sort of pop music we can get behind quite easily. (Miriam Wallbaum) 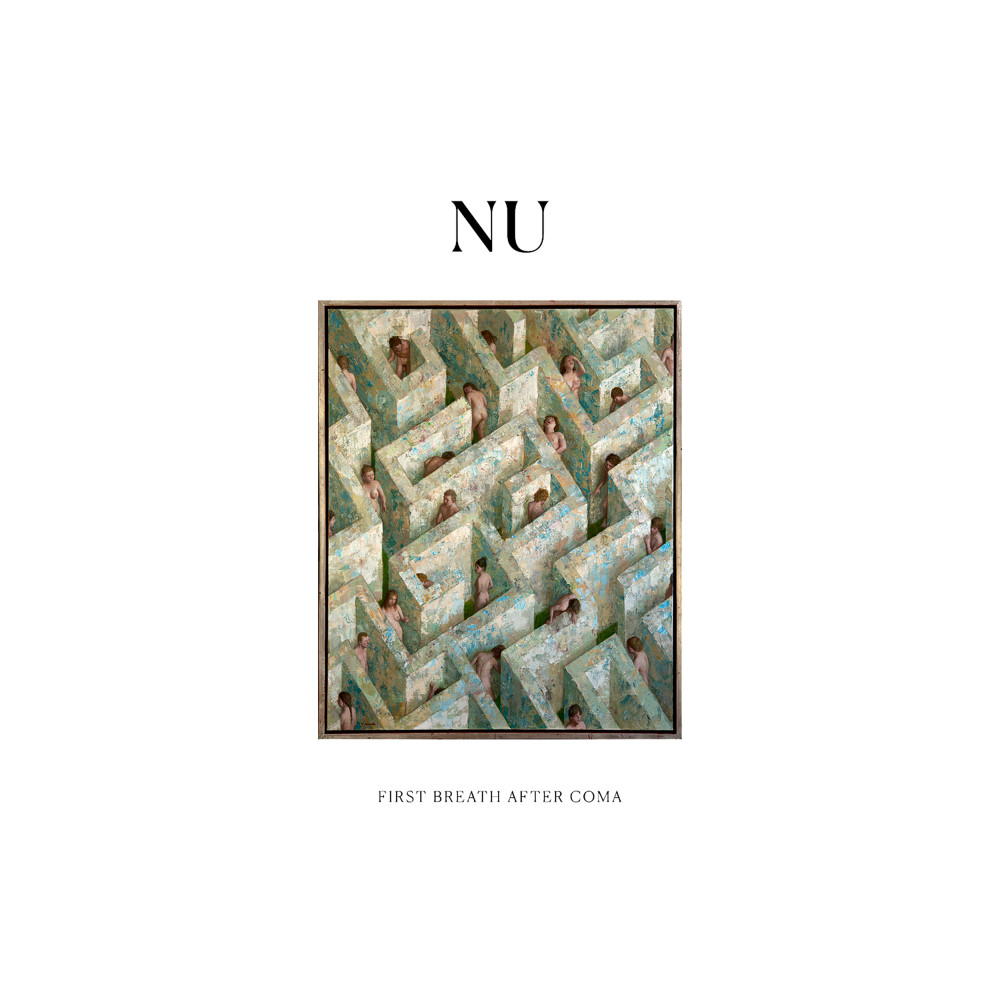 Sounds like … a cinematic clash of post-rock DNA with a futuristic pop understanding.

Somewhere in-between the three years since their critically acclaimed second studio album Drifter from 2016 and the release of its follow-up Portuguese five-piece First Breath After Coma must have been fed-up with everything: Their band, the outworn post-rock sound and the whole idea of recording an album in the traditional sense. Born of out of this frustration a new self-understanding awoke and the result goes by the name NU (which does not only mean ‘new’ but also ‘naked’ in Portuguese) and is a radical new start for the group. The eight songs are meant to create one big picture and they mean that quite literally because First Breath After Coma also produced an entire film along with the music. It’s an epic tale of birth, love, loss, death and everything in-between. The music does indeed benefit from the cinematic images so I really recommend to take a closer look at it right here.

Apart from that the sound itself also sees the group exploring new territory. NU sounds more electronic, experimental and urban as they adventurously combine their post-rock-understanding for epic sound structures with a new openness towards pop. Vocoder effects and estranged-sounding vocals open the album on The Upsetters in which the band isn’t afraid to use a glamorous guitar solo towards the end. Please, Don’t Leave still recalls their post-roots but there’s a sensual R&B rhythm that breaks through, creating a soulful futuristic vibe. Somewhere between James Blake and Mogwai First Breath After Coma have created a niche of its own. In it anything is possible, from a big chorus (Change) to a gentle gospel with Bon Iver vibe (Feathers And Wax) to an epic drum and choir set-up (Heavy). A lot is happening on NU, partly too much to get it instantly. But that’s the big plus of this new First Breath After Coma record – by questioning the idea of an album ahead of its production they actually ended up recording a pretty impressive one. I’m pretty sure that was also intended (Norman Fleischer)

The Japanese House – ‘Good At Falling’ 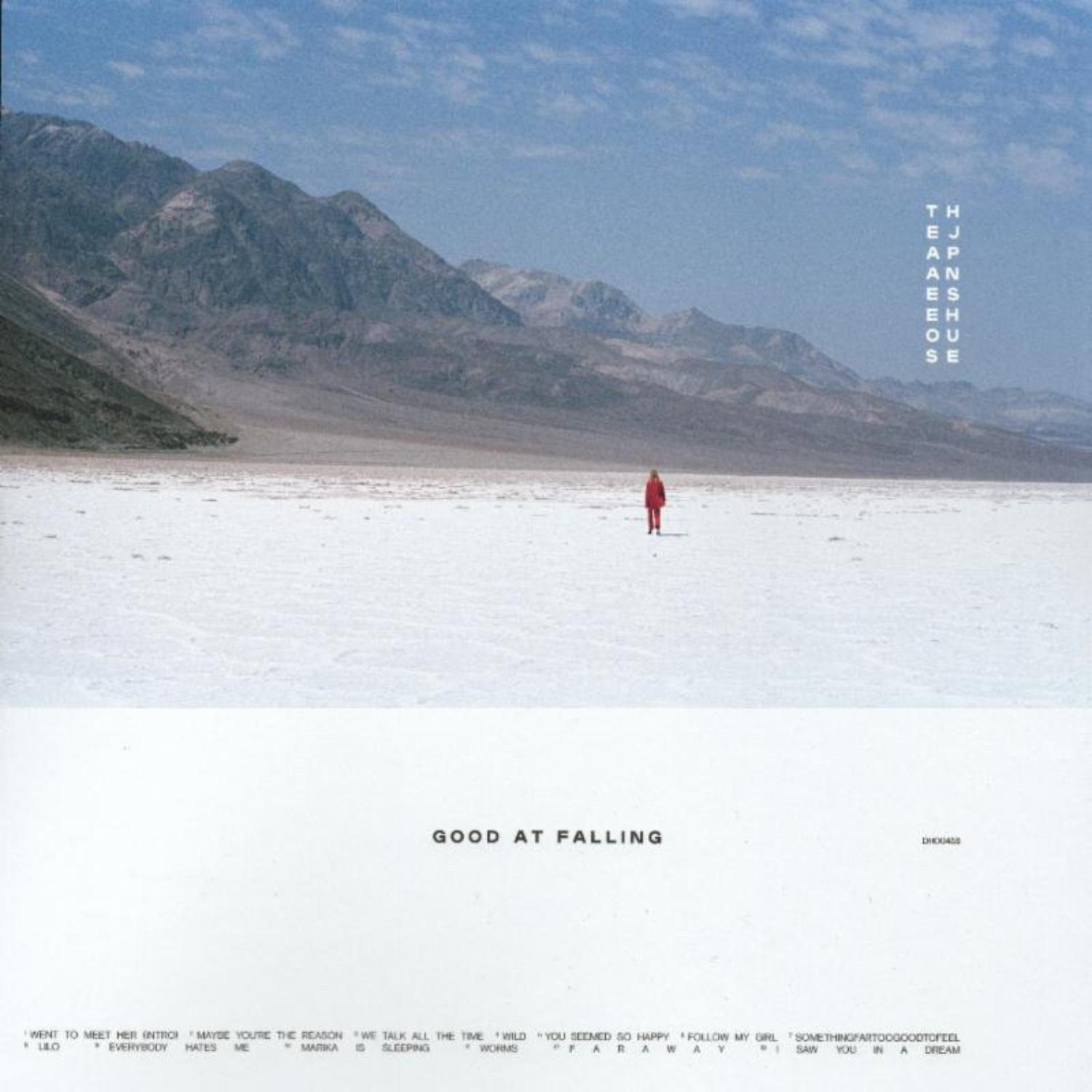 Heartbreak has never sounded so beautiful! On her new album Good At Falling The Japanese House takes us by her hand and guides us through the ups and downs of a past relationship. After the young singer and musician Amber Bain lifted the mystery of who was hiding behind the name, she now opens up more than ever. The intro Went to Meet Her is the perfect teaser for the following album. It is tribal percussion layered over eclectic electronic beats and lush partly auto-tuned vocals reflect the variety of Bain’s style. Her voice takes an androgynous twist on We Talk All the Time singing of the troubles of falling out of love but remaining friends ‘We don’t touch anymore, but we talk all the time”. This is something Bain apparently is quite good at as the video to the lead single Lilo shows her and former girlfriend reenacting their break up. The slow beat and the deep resonating vocals make this heartbreak song irresistibly beautiful and weirdly soothing. Still in the middle of blue nostalgia, the dreamy upbeat indie pop of Maybe you are the reason distracts from the equally emotionally draining lyrics.

Listening to Good At Falling is almost like reading an intimate diary entry. Amber Bain fearlessly lays all of her emotions bare for the listener, but does it without losing face. Each song is a mature reflection of strong utterly human emotions, demonstrating great lyrical skill. Sung with celestial vocals that vary between cool androgyny and cheerful pop, one song is catchier than the other. But it is the versatile composed beats that make Good At Falling truly unique. The electronic haziness is like a ticket to a surreal otherworldly space. And for the duration of each song everything else becomes just a little blurry. As long as the melancholic harmonies are ringing in your ear you find yourself floating alongside Amber Bain on the finest outlets of her sorrows. (Liv Toerkell) 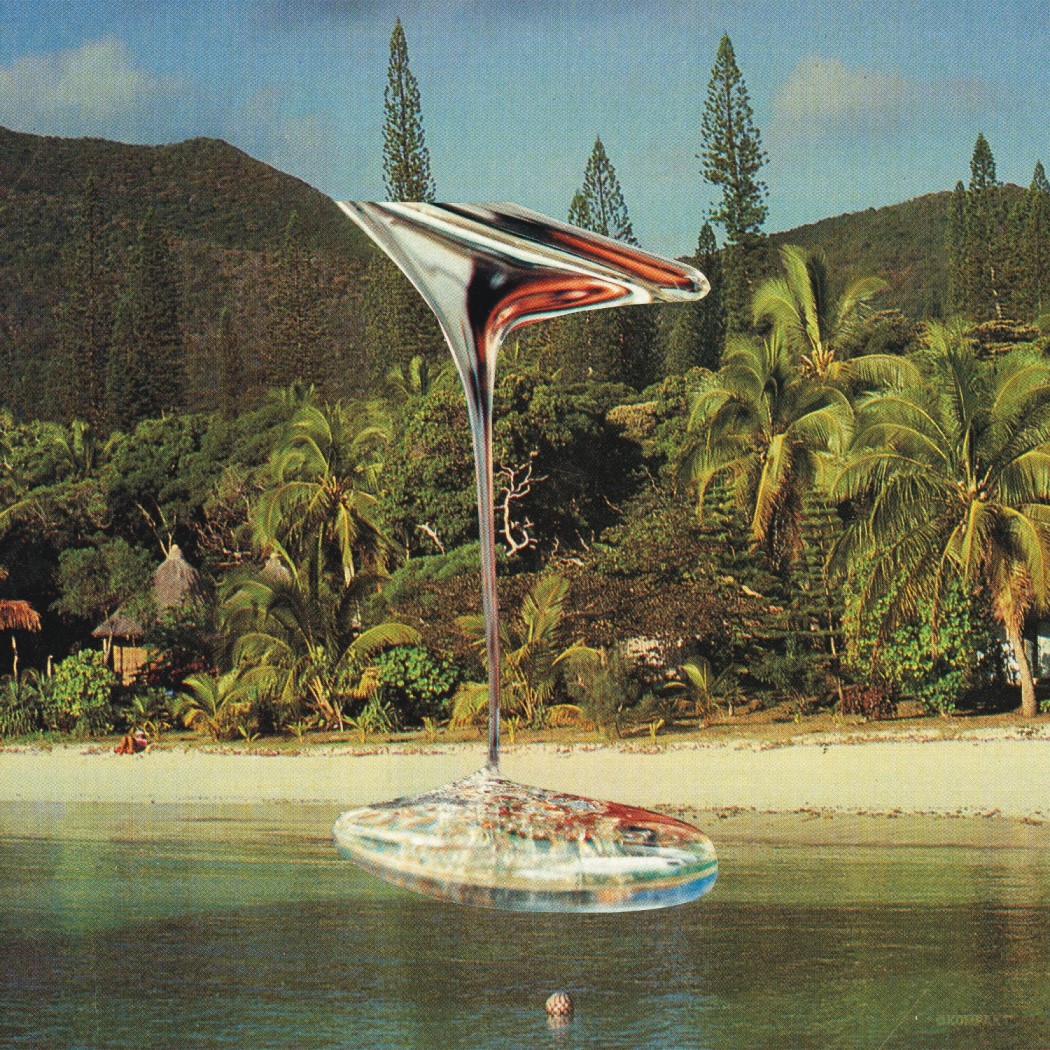 Sounds like … a slow grooving psychedelic ride into the sunset.

Despite releasing on acclaimed Cologne-based label Kompakt the sound of Harm Coolen and Merijn Scholte Albers aka Weval is quite unusual compared to the label’s normal output. Their self-titled 2016 debut album wasn’t really aiming for hot club nights and the follow-up takes their psychedelic slowed-down techno concept even further. The Weight is a rich and profound affair that is carried by a subtle and funky psychedelia that settles right between dusk and dawn, it appears. There’s just a lot to discover on the second Weval record. Playful organ sounds (Heaven, Listen), gentle vocal samples (Roll Together) and mysterious vocoder performances (Couldn’t Do It Better) go hand in hand and create a cohesive vibe throughout the entire record.

Weval continue to strengthen their idea and deliver groove with a lot of musicality, leaving no doubt that these guys are way more than just two electronic music producers who rely on familiar sound structures. They are indeed pretty impressive songwriters and songs like the space lullaby Silence On The Wall and the nocturnal ballad Heartbreak Television really underline that. They are actually getting closer to the territory of artists like Ariel Pink and Panda Bear right here… or at least a tropical and more trippy version of Nicolas Jaar. The Weight is a record that works really great as one big whole experience you listen to from start to finish without interruption. Because slowly diving deeper into the sound is what makes it so good. (Norman Fleischer)