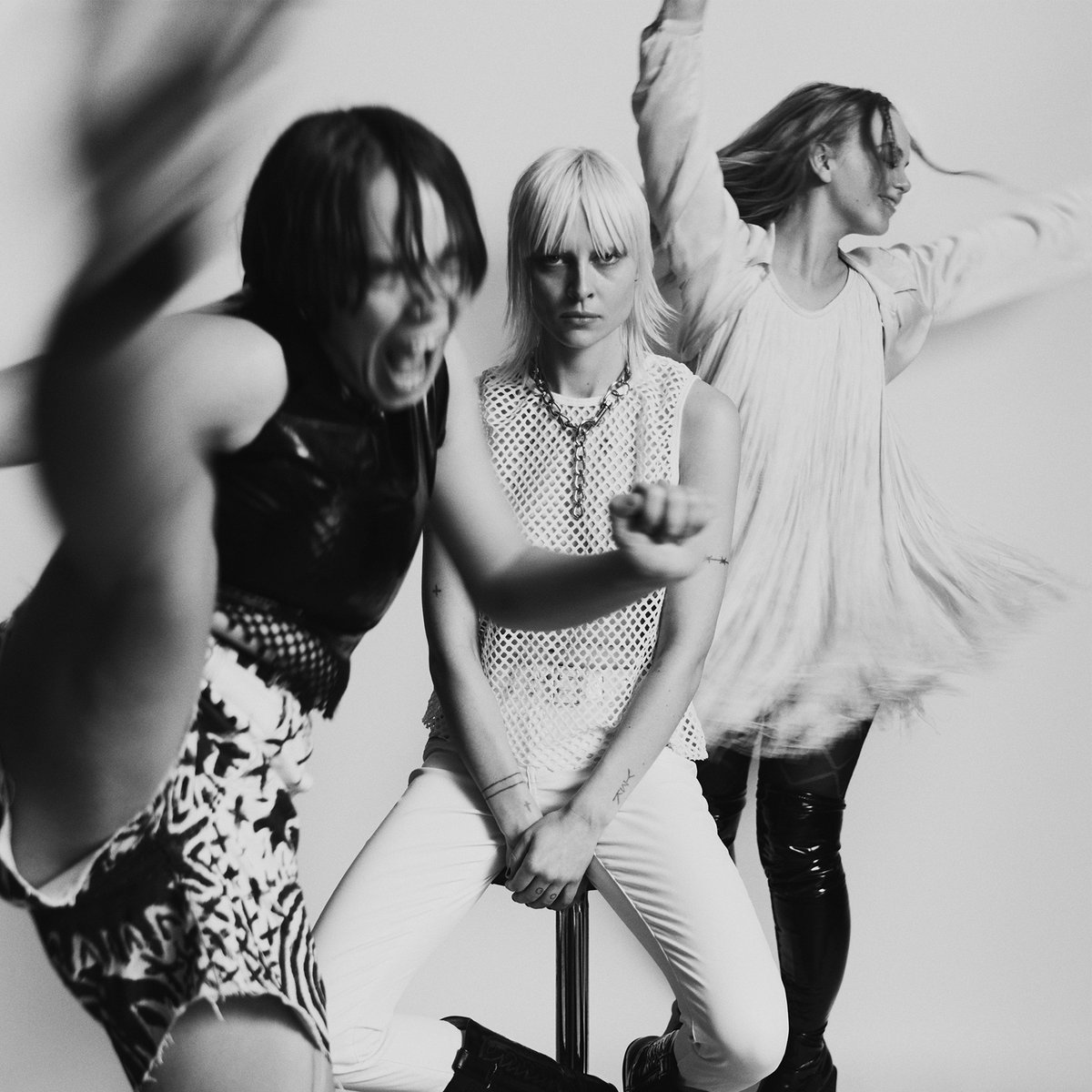 What started out as a project in art school became one of the leading feminist voices in today’s pop music business. With self-empowering songs as their hit-single Somebody Dream Wife’s self-titled debut from 2018 left a big footprint. Always holding up a “girls to the front”-ethos, the trio toured with bands like Garbage, The Kills or Sleigh Bells and played more than 200 shows within the past two years. And this ethos, which they also claim during concerts and encourage their non-male audience to take their place in the front row, remains the core for their sophomore record So When You Gonna… as well. Not only because they gathered an all non-male team around them to bring this record out, they also made a podcast with the same name, where one of the three is having a one-to-one conversation with other non-male artists the band admires and/or collaborated with. The podcast can be put under the same motto as the record itself: “An invitation, a challenge, a call to action,” as singer Rakel Mjöll says.

“It was amazing to work with this community of womxn on this album who are supporting each other in an industry that is so male-dominated. It was a way of us practicing what we preach” guitarist Alice Go explained. With producer and mixer Marta Salongi, (FKA Twigs, Björk), engineer Grace Banks (David Wrench, Marika Hackman) and mastering engineer Heba Kadry (Alex G, Beach House) the band created a safe place where they felt free and confident enough to explore new musical fields. The result is a record, that heavily drags into pop, without losing its riot grrrl attitude. The eleven songs pend between angry punk-rock, playful indie and sentimental ballads and display more than one so far unseen facet of the band. For example, the Lorde-like alternative pop vibe in the synthesizer based Old Flame. Outstanding on pretty much every track is the guitar play of Alice Go. The irresistible drive in the riff of the title track So When You Gonna …, danceable feel-good vibes in Temporary or the groovy play in Sports! lift the songs and keep them from becoming too casual every now and then.  The lyrics mostly remain serious and cover heavy topics like abortion, miscarriage or gender equality. But despite of that there is a joyful, empowering vibe to the record, which makes it an uplifting and encouraging listening experience. By doing so, Dream Wife hold the balance between being political and social conscious and living out the great time they obviously had working on this record. (Abhilash Arackal) 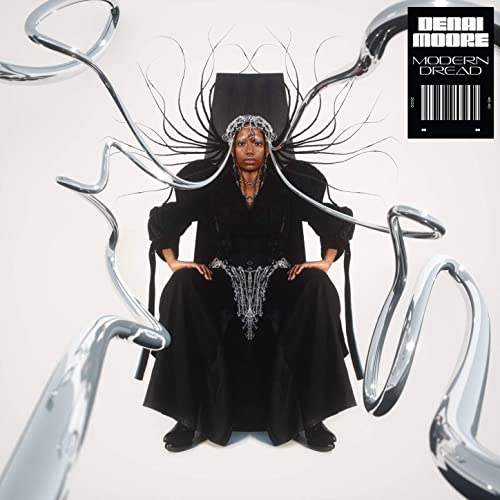 Sounds like … a confident and contemporary fusion of neo soul and pop.

Between pop and modern RnB and neo soul, Denai Moore’s third record smoothly shifts within these genre boundaries. The singer delivers an unapologetically confident record with Modern Dread. Merging the personal with the political she strikes up important questions pondering on where her place as a human being is in the days when the world seems to be on fire. How important are one’s individual feelings when the world faces enormous struggles? On Modern Dread, Denai Moore stirs right into these existential topics.

From the danceable opening track Too Close, to the tender Grapefruit, the singer expresses different lyrical and musical personas. Her soulful vocals hold the record together and whether she sings over a techno-spiced or hip hop beat and RnB influenced smooth grooves, her voice provides the silver lining. Fake Sorry sees her channel the inner sass whereas Slate is an intimate ode to empowering oneself in hard times. To The Brink features heavy synth layers and driving drumpad percussion. Modern Dread is an utterly contemporary fusion of elements by an artist who knows what she wants to sound like. (Liv Toerkell) 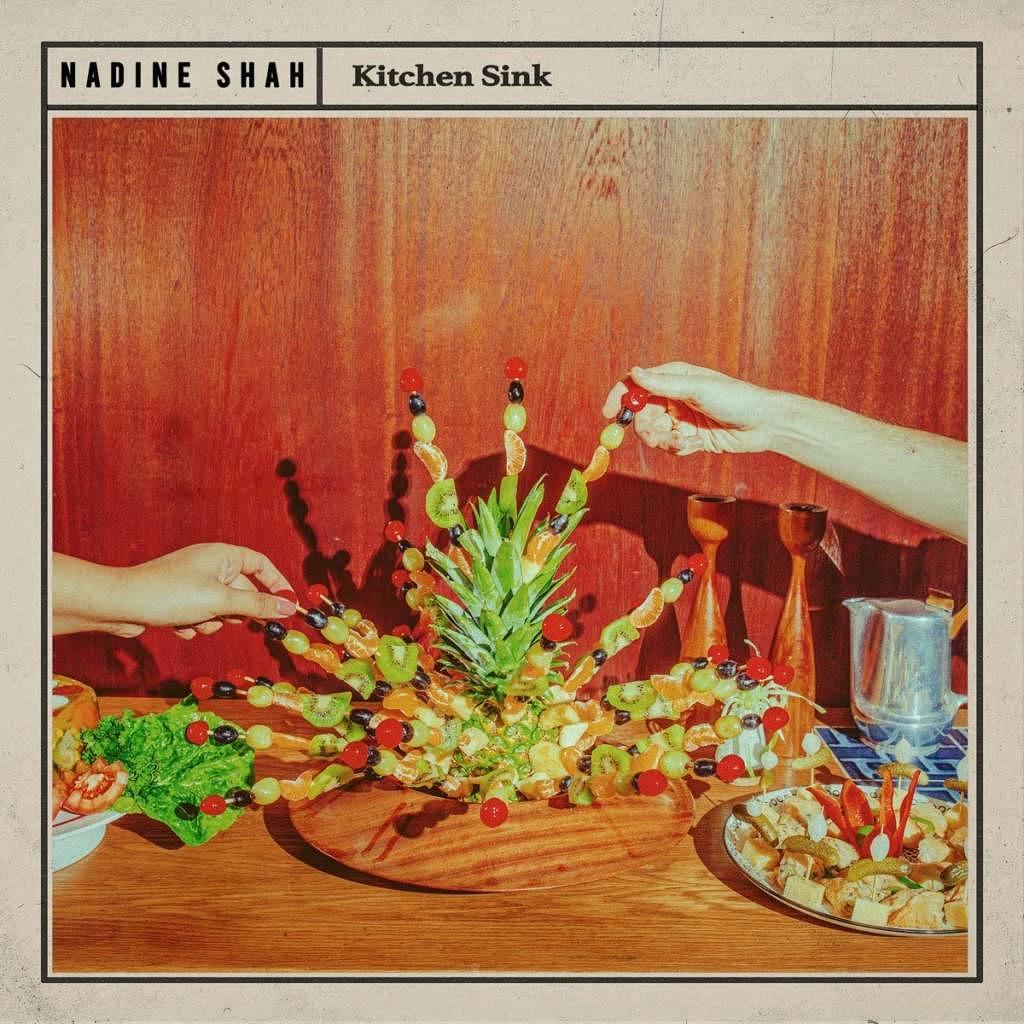 Sounds like … the euphonious and sharp record for an evening of good company and wine.

Kitchen Sink grows on you like a stranger who gives you a wonderful compliment in an unexpected moment. At first, you’re taken aback, then you feel seen and then you wish you could get to know this person. Nadine Shah’s voice comforts you and takes away the need for perfectionism which haunts so many women, including me. The record is a celebration and interrogation of tradition filled with sensuality, honesty, and musical diversity. In my humble opinion, it deserves another Mercury Prize nomination like her previous work Holiday Destination.

There are many references one can draw when it comes to Shah’s sound – PJ Harvey, Alabama Shakes, Pulp, one of my favourite Turkish artists – Gaye Su Akyol, Savages, it could go on. But what makes this record outstanding are Nadine Shah’s witty and observant lyrics. One of the best examples being Ladies for Babies (Goats for Love): “He wants his lady / To be a lady / To care less, be hairless / All he wants in fairness / Is a baby / A little baby / To care for, be there for”. Many tracks are not only remarkable through the right amount of sarcasm and bluntness but also through their variety in instrumentation. On Dillydally, a flute bridge accompanies a straight-forward drum section and the title track with its clapping, metallic echoes and guitar solo is building up the right amount of fury. Kitchen Sink is an empowering, charming and on-point piece of work and I hope it sets Nadine Shah up for a lot more success and recognition. (Anna-Katharina Stich) 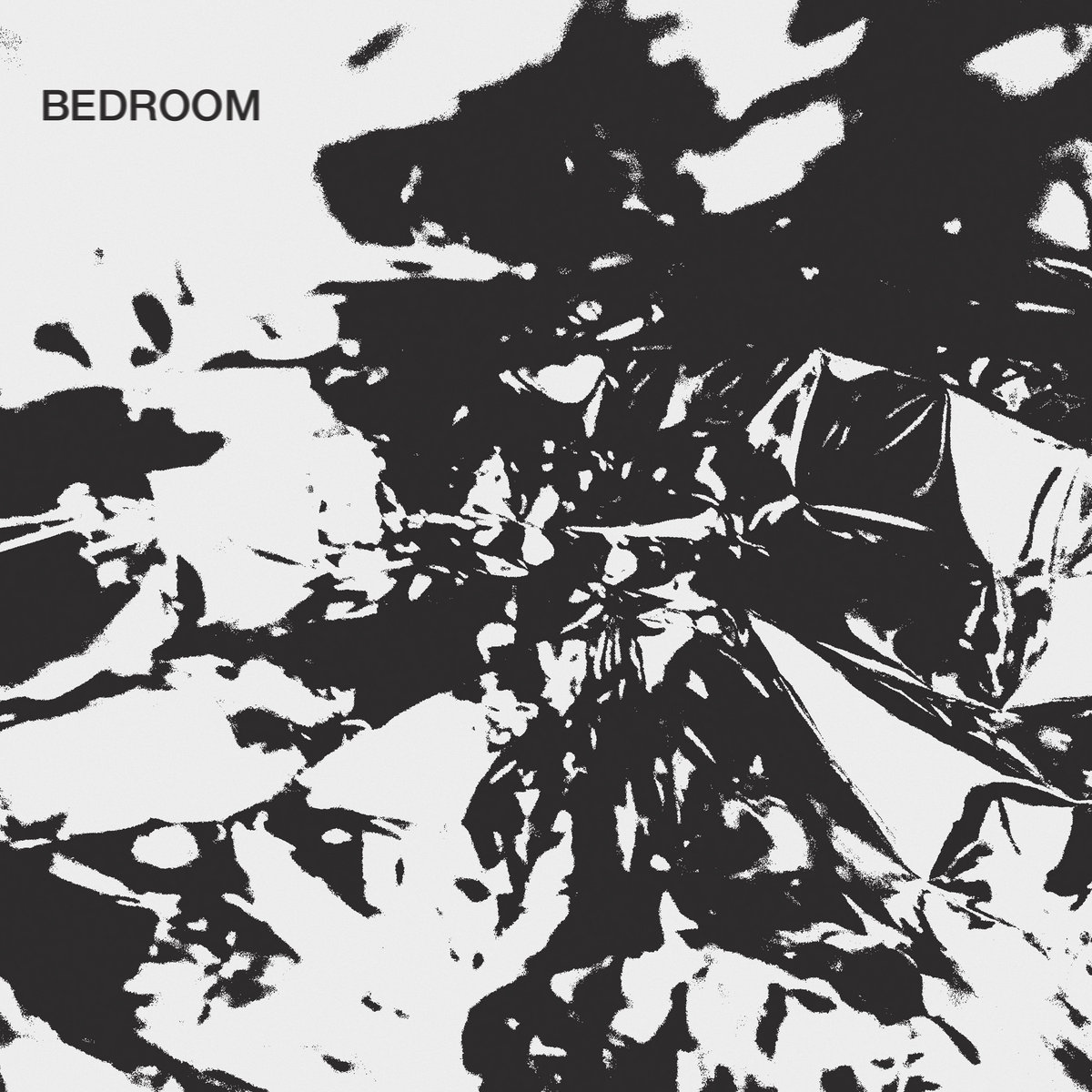 Sounds like … the lovechild of Slowdive, The Cure and timeless teen angst.

There are lots of different approaches to making music; some people like to reinvent the wheel, take the concept of sound forward while others prefer to stick to familiar patterns. Well, obviously both things can co-exist as well. In the case of British five-piece bdrmm their sound isn’t about innovation, it’s about authenticity and raw emotional honesty, delivered in a melange of dreamy wave rock with shoegaze and post-punk influences. A bit Slowdive here, pieces of The Cure over there but also nods to contemporary groups like DIIV and Deerhunter are sensible in the lush and hazy sound of their debut album Bedroom. And the fact that this album could have also been released 25 years ago is actually a compliment to the band and producer Alex Greaves (Working Mens Club, Bo Ningen) who stick to the very essence of this sound. Funnily, it was Washed Out‘s chillwaving sound that made band leader Ryan Smith decide to pick up a guitar and produce his own music back in 2016 as an alternative to his bar job back then. Obviously, that’s the sort of British origin story a group like bdrmm needs. Four years later Ryan and his group from Hull perfected their sound in a satisfying way and following last year’s critically underrated EP If Not, When? their full-length debut doesn’t disappoint as well.

The opening instrumental Momo directly sets the tone for what’s about to follow by creating that lush shoegaze setting you came for. Push/Pull speeds up the tempo and channels The Cure while the mighty A Reason To Celebrate feels like a forgotten gem from Ride. Further highlights on Bedroom include the playful Gush and the heavy If… on which the group builds a mighty wall of sound that really sucks the listener into the special vibe of this absorbing music. bdrmm manage to create a cohesive concept album with their full-length debut, as its songs run through the different stages of a break-up set against the backdrop of the ups and downs of your early twenties. It are timeless and relatable themes the British newcomers unfold right here. “When I listen to a track, I want to be able to feel what the writer was feeling at the time of it being recorded,” explains Ryan his relationship to music, “That’s why we resonate with shoegaze so much – it’s not just a song, it’s a feeling” and listening to this mighty little masterpiece you totally get that. Bedroom isn’t about reinventing any wheels, it celebrates timelessness and emotional honesty and those of you who are looking for exactly this won’t be disappointed. (Norman Fleischer) 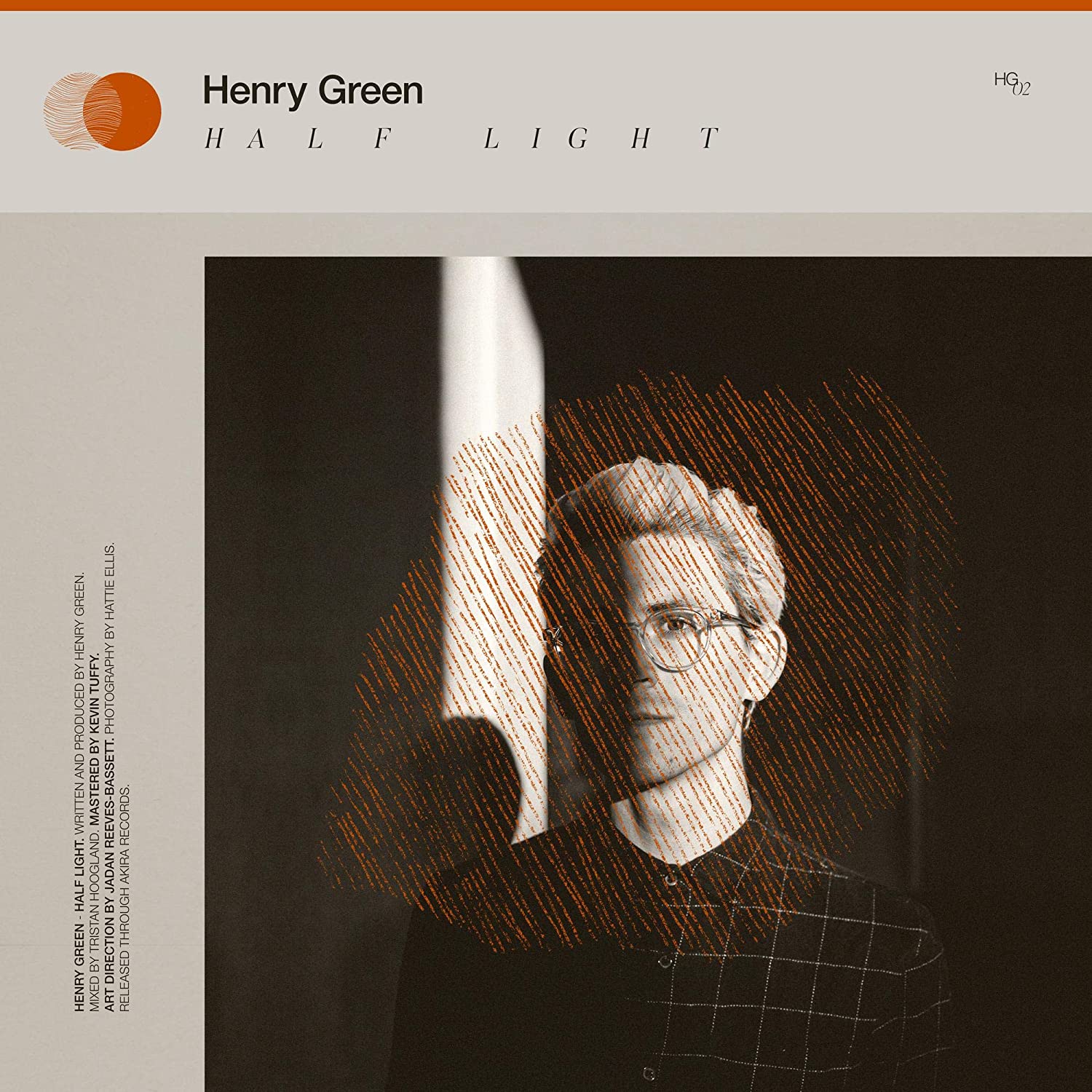 Sounds like … a breezy stroll through lush electronic soundscapes.

Imagine you are walking along a winding path next to a field covered in the dim atmosphere of nightly twilight, the sweet spot of an evening, neither day nor night. Then you already get a good impression of the mood Henry Green puts us in on his sophomore album Half Light. For the Bristol-based producer and songwriter it is exactly the idea of moving in between light and shade, of being neither here nor there, that served as a trigger for his sophomore album Half Light. “I almost wanted to hint that this album is a transitional thing”, he explains. “The half light is a lyric in the first verse I wrote for the album, and I love that idea that you’re not fully standing in the sunlight. You’re not yourself and you’re slightly in the dark in your mind, but you know that you still have something to give”. Do phases of transition  or disorientation then entail possibilities without end? Well, Mr. Green at least succeeds in illuminating that idea here on both musical and lyrical levels, that much is for sure.

Half Light follows his much acclaimed debut Shift from 2018 and Henry Green is sticking to his signature sound here as well, which always incorporates soft keyboard sounds, a mellow drum section and occasional guitar elements. These subtle and comforting sound patterns are fronted by his mostly whispering vocal performance which gives the songs a quite velvety touch that is most delightful. In that manner, the first track All starts off with fine synths and a razor-thin confession of the singer, trying to overcome a nauseating state of writer’s block: “Moving at pace with my vision unclear / Losing the days to the lines that appear / I’m hearing faint diphthongs but I cannot find true form / Half light, half light / Call all the words out of me / Call all the words out of me”. In a similar passion, Fabric, recreates the motif of being underway to an unspecified destination: “We’re not the only ones / Always moving”. The atmosphere of the album on the whole doesn’t rise to much variety and remains in the float of solemn arrangements, but yet, this is far from colourless, but rather consistent with the crafty melange of imagery and musical setting. Half Light is full of moments of deep introspection and the idea that beauty really lies in between instances of the highs and lows in life. And it is surely powerful at enriching these images with musical sensations. (Andreas Peters)