Pop & Politics In Poland: A Look Back On The OFF Festival 2015 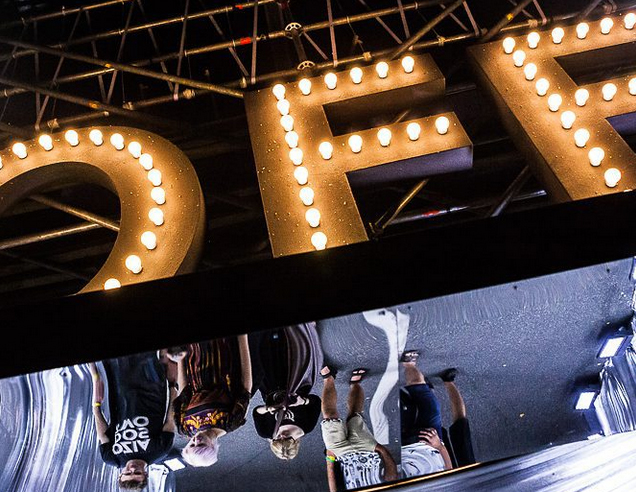 As a careful reader of our admirable little magazine you might have noticed that we’ve become a little picky about festivals. Not in the sense that we want ever more for our entertainment but that we’ve grown a little concerned about their initial core value, the music, being swept away by commerciality. (German readers might want to revisit our latest pieces on festival culture over here) Luckily, there are festivals that keep the good vibes coming every year. One of them is the OFF Festival in Katowice, Poland. So here we are, back from 2015’s edition of the OFF Festival and hardly noticed that its been the event’s 10th birthday – plus, the city of Katowice was celebrating its 150 years of existence this summer.

Pretty much every other festival would have created a big buzz out of this celebrational circumstances. The OFF obviously didn’t. They stressed their long term success in this year’s credo Ten Years Of Swimming Upstreams but they never would have let anything rule out the most important thing of the weekend: The music, good vibes and an healthy environment.

As one enters the festival area – especially on a questionably hot weekend like this last one – it feels as if you’re entering a carefully curated landscape garden, rather than a theme park. The area of the Three Pond Valley is located a little outside of city but the ultimate plus is that it’s as green as it gets in Katowice. The two separate stage-complexes are located at the edge of the woods, several chill-out areas are spread out everywhere, firemen worked all three days to cool the audience down a little – all in all everybody seemed just a little bit more relaxed than you’re used to know it from Germany’s big festivals. 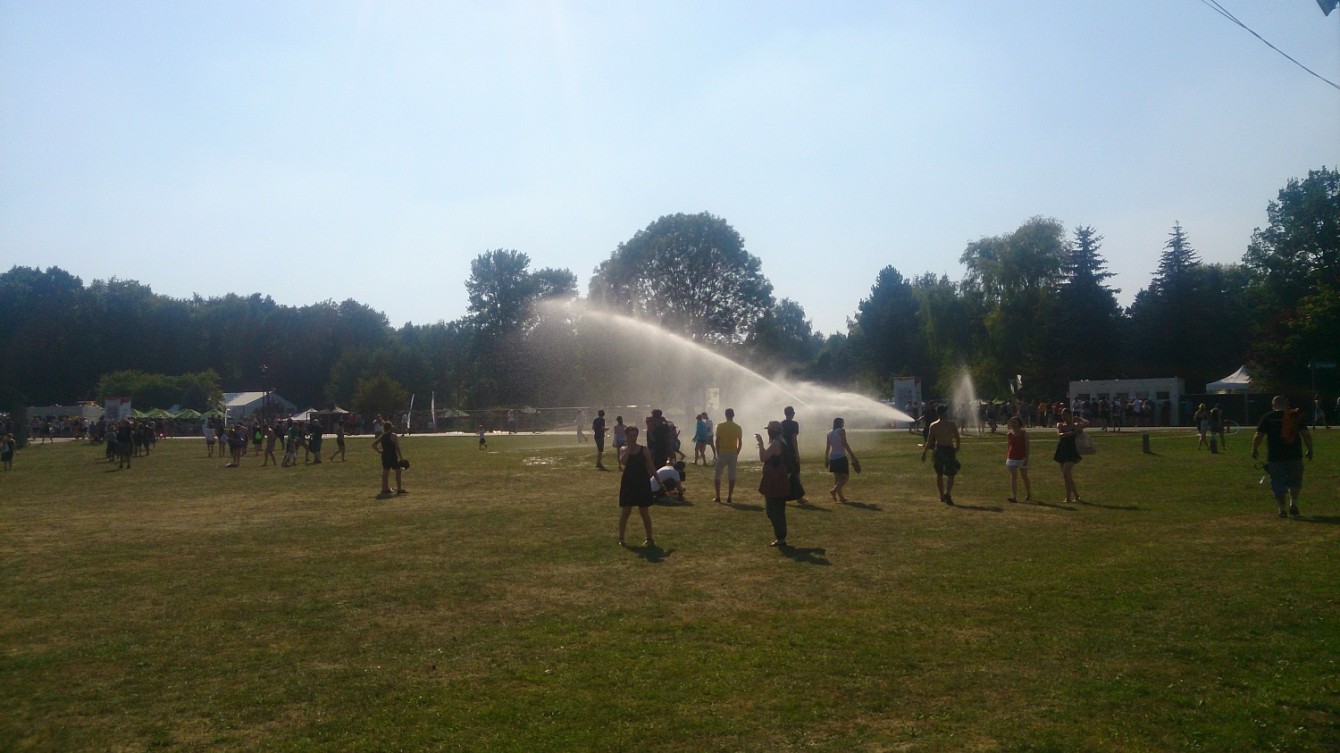 Cooling down as a necessity and a joy

Diversity from Drone to Dance

All perfect conditions to enjoy OFF‘s traditional mixture of yet unknown Polish acts, art, literature, cinema and even a burlesque show, as well as international grandezza. Never heard of PABLOPAVO I LUDZIKI before? Nevermind, just spread out your blanket, lay down in the grass and get impressed by how sunny jazz-induced hip hop from Poland can sound. One thing is for sure: There is no need to be concerned about the diversity of Poland’s music scene.

Neither ain’t there any doubt about the OFF‘s diversity in general. YOUNG FATHERS heated up the packed Trojka Stage early one with their grimey and earnest rap while the Timbuktu natives and now Mali-based SONGHOY BLUES got and inspired the best moves possible in the late afternoon sun. DAMON ALBARN did already approve and we can assure you: These guys are gold.

Dressed in a glittery jacket and gifted with her outstanding voice, SUSANNE SUNDFØR then gently guided us into the night with her sometimes dark, sometimes cheesy pop tunes. Even the biggest stages are not too big right now for Norway’s current pop wonder.

Constellation Records’ newcomer OUGHT reminded us of how much we miss WOLF PARADE and simultaneously made us forget about them, before SUNN O))) finally were able to suck everyone’s energy into their diabolic maelstrom of sound. Their set turned out to be a black hole from which it was hard to climb out again – how relieving that the living freak show THE RESIDENTS could be observed with a little smile as well. Disappointment of the night: DEAN BLUNT. He might have had his troubles with the technique and sound of the experimental stage tent where it’s hot, even nighttimes, but the coldness of the performance still left us riddled.

The second day started with sun – and more sun. KING KHAN & THE SHRINES still went for it – what a voice, what a dress, what a band! HUN-HUUR-TU on the other hand were dressed more traditionally, just like their performance of ancient Siberian music and the pretty impressive throat singing demanded it – they somehow did seem overwhelmed by the audience’s response though.

Overwhelmed is something that Mark Kozelek – who is of Polish ancestry – hardly can spell. Mostly he’s overwhelmed by himself these days. The set of his SUN KIL MOON was much anticipated and quickly interrupted by Kozelek stealing a photographer’s camera and yelling at him and his colleagues to ‘get the fuck out of his face’. It didn’t seem to have crossed his mind that they were just doing their jobs, especially as no note in the media area listed SUN KIL MOON‘s performance as photo restricted. Anyway, Kozelek – who is of Polish ancestry, did we mention? – calmed himself and delivered a breathless set of songs from his late catalogue. If you’re not moved by Carissa in a full band set up, you’re not moved by anything. Love him or hate him but this guy’s unchallenged in songwriting right now. And his band – which is in part of Polish ancestry – really turns his ongoing stream of consciousness into a splendid set. 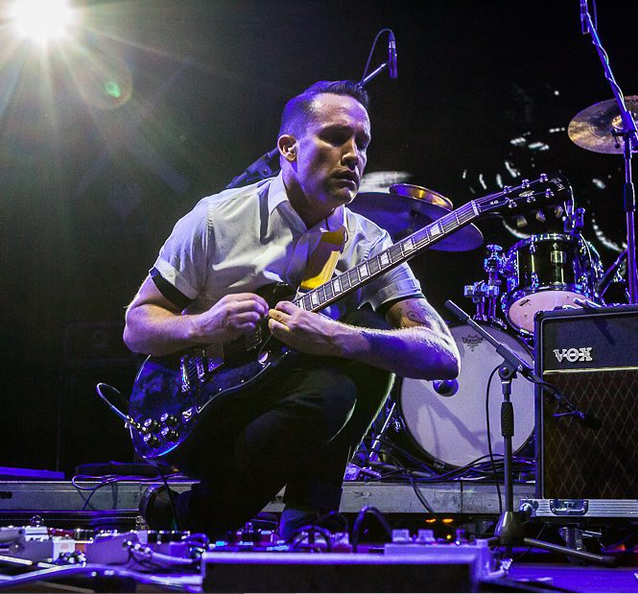 Time for some decency after all this ego: SUN RA ARKESTRA turned out to be the elder statesmen of psychedelic jazz with their at times trippy big band arrangements whilst FUTURE BROWN could ultimately live up to their name and lay out the future of rap, pop and politics – great performance of the new WARP signing. Day 2 was finished up by a mixture of experimental sounds to get carried away with, laid out by XIU XIU intonating music from TWIN PEAKS, and the more reliable sources of energy with Mathcore legends DILLINGER ESCAPLE PLAN going wild and shoegaze pioneers RIDE celebrating a triumphant yet somehow, in terms of the OFF, slightly predictable comeback.

As busy as you could have been to cross of all the must see acts you could also get surprised by little pop up shows on a flexible small stage – like the very wild one from LA based hardcore/rap combo HO99O9S. Or you could spend some time listening to panels, discussions and readings at the literature café – where on Sunday even the one and only PATTI SMITH stepped by to participate in a discussion. 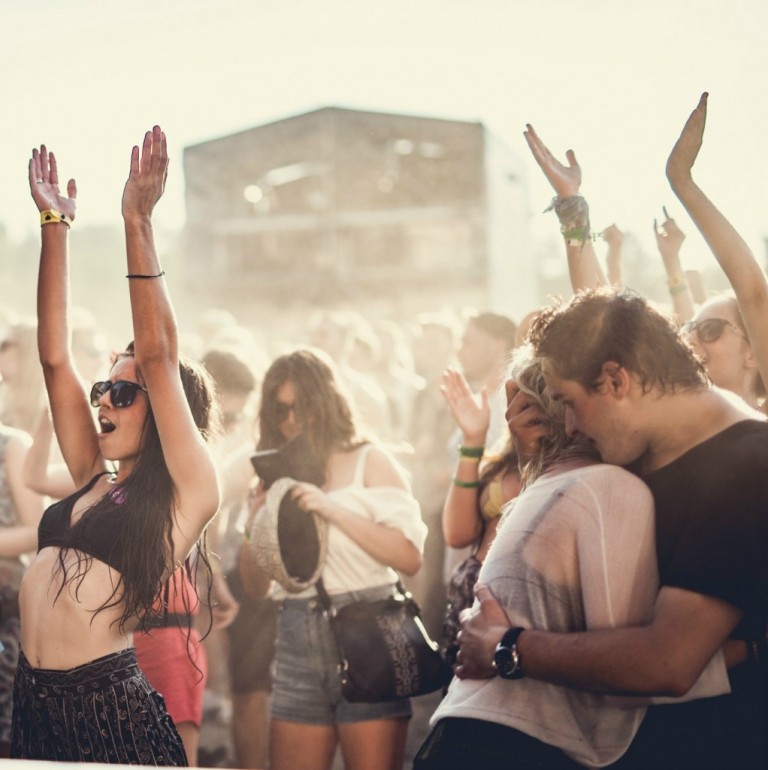 Photo by Off Festival

Apart from her appearance there, she definitely stood out as an act on the main stage as well – despite the sometimes hard-to-stand, outdated hippie credos to “build no fucking bombs anymore” she still put on a classy rock show, playing her famous debut album Horses in its entirety. A performance to remember. The young wilds tried to keep up with that on Sunday, the third festival day, and in their way, succeeded. Both ALGIERS and ICEAGE put on very focussed and professional sets, while the former definitely proved a greater variability. Keep an eye on ALGIERS, boys and girls!

Boys and girls were the theme of a slightly disconcerting appearance of the drag artist ANN LIV YOUNG as well. Sure, the capitalistic construction of female sexuality and western bigotry towards female bodies are important themes – but not in form of an aggressive discussion with the audience in which the music played a minor role.

So, back to mainstream: SON LUX perfectly captured the magic of the last sunset on the last day of a festival with his dreamy yet danceable pop format – highly enjoyable! And whilst we were alienated by PATTI SMITH‘s political impetus at times, the all-hyped rap duo RUN THE JEWELS made visible how it’s done in our post-cold-war world. Fun, societal change, Ferguson, a renewed and fresh intelligence – all’s been in there in KILLER MIKE’s and EL-P’s performance. This is why rap music is probably the most vivid scene and a musical promise for the future right now.

While dancing off the heavy feet of a festival weekend to DJ NIGGA FOX and M.E.S.H. one could slowly come to drawing the conclusion that the OFF Festival stands for everything we ask for from these kind of events. A carefully curated line-up with total disregard for genre limitations, a sense for sustainability in terms of food, waste and infrastructure, a festival area that works as its own little utopian world for a few days and, most prominently: a reliability when it comes to widen our horizons. We’ll see you again, Katowice!