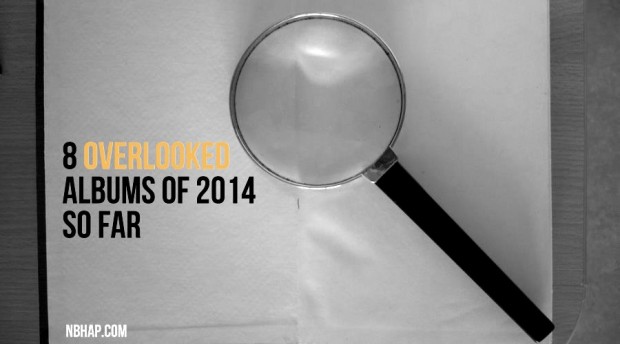 We’re halfway through the year 2014 and already experienced some really great longplayers. We got Lost In The Dream with THE WAR ON DRUGS, were In Conflict with OWEN PALLETT, had SUN KIL MOON telling us stories about Benji or DAMON ALBARN ones about Everyday Robots. You can’t complain about the musical quality of 2014 so far. That much is for sure. And there’s plenty of potential greatness still about to arrive – just take a look at NOTHING BUT HOPE AND PASSION‘s schedule of upcoming releases.

But of course, in the haze of all these releases there are always albums who get left behind. Sometimes we simply overlook them, sometimes we’re not even aware of their existence. But now is the right time to talk about some of these records who deserve attention but didn’t get it so far. These are eight overlooked albums of the first half of 2014 that you need to listen to. You won’t regret it, trust us.

The lines ‘Didn’t they tell you love, the love the love’s there / Don’t go and bother me’; they break my heart, just before Damon McMahon turns into Lou Reed and Tim Buckleys grunge infused grandchild. Levitating, dark, vibrant, smacked up and seductive. Darling the storm is soon: and AMEN DUNES breathing songs meditate along the drug and shadow wearing lyrics. Repetitive till you drown, blurry dangling psychedelic-folk of the weird kind and probably the most effective record title there ever was.

What are eight years? Well, pretty much an eternity in the music industry. Britpop band EMBRACE decided to leave the business for a while behind after 2006’s The Next Day peaked at number 1 in the UK album charts. The credo for their comeback album was clear: they would only return with the right amount of quality material that good stick up to their praised 1998 debut The Good Will Out. And they really did. Although the sound of Embrace feels a bit fallen out of time it’s a nice comeback for these old heroes.

EYESCREAM is the project of Andrey Novikov from Saint-Petersburg, Russia. With Noir he released his fifth full-length album this year. The album blends a multitude of elements from diverse genres to create an intriguing listening experience. From clean, glitchy synthlines and promounced beatwork to expansive ambient and post-rock elements, the sound of ‘Noir’ proves to be both interchangeable and elusive. An emotive journey that leads you out of a disturbing dream and into warm sunlight. Noir was released in April via Tympanik Audio.

Released on super-producer Paul Epworth’s new imprint, Wolf Tone, GLASS ANIMALS’ album ZABA is certainly an impressive debut. With its twist of pop, R&B grooves and expressive vocals, it’s quite unlike anything we’ve heard this year. Wanting the album to take you on a journey from start to finish, lead singer Dave Bayley cities influences such as Madlib, Nina Simone and FLYING LOTUS. Named after the children’s book The Zabajaba Jungle by William Steig, the oxford quirk-pop quartet’s first full-length is sexy, tropical and gorgeously bizarre.

As if the name of this band itself isn’t already quite spectacular, the music definitely is. But in the most tender way. The band around sweet and still charismatic singer Lara Chedraoui released their second longplayer this year. It’s filled with soulful little indie music anthems that drench in melancholia without getting boring of the course of the record. They are still sweet and loveable from the outisde but behind their musical costume INTERGALACTIC LOVERS provide real emotions and a certain sense of longing. A group that definitely needs more attention in the future.

Matt Cutler, the man behind LONE, always had a good hand with giving his electronic beats a certain twist. The just released new album Reality Testing takes his tracks even further away from the dancefloor, out of dark house music clubs and straight into the sunshine. A surprisingly laid back and soulful record that combines different elements into one big floating piece of electronic grooves. Grab it right now before the summer ends.

The Southern Californian band around the man with golden voice, Chuck Robertson, has thrilled their fans all around the world with a new full length in 7 years! It was def worth the wait, for Dirty Rice is an impressive collection of punk rock, ska, Dixie, reggae and pop songs in the typical CADDIES manner. Catchy chants and melodies track by track make us fall for this band over and over again. We can’t wait to catch them live this summer!

Only two years after The Seer, the Texan No-Wave-remnants late and hardly digestible Opus Magnum, Michael Gira and his wolf pack report back with their next big load of disharmonic, repetitive maelstroms of sound. To Be Kind: Ten songs, two hours of discomfort. A worthwile trip through what’s dangerous, mean or brutal and yet another masterpiece full of exhausting passion in primordial wildness.