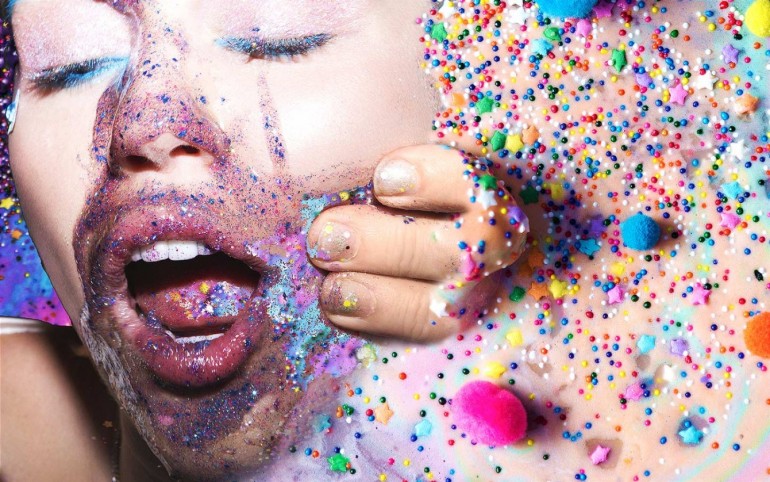 Oh hell yeah, I know what you are all thinking: What is wrong with this guy throwing at us with all this stuff about loving TAYLOR SWIFT after all or accepting MADONNA a bit more, just when no one seems to care here. Well, the answer is simple: Because you should start thinking less about mainstream as one big piece of over-commercialized shit (which, yeah, most of the time it is) but rather start thinking more outside the box when it comes to ‘pop’. There are plenty of things going on right now in this crazy circus we call popular music and one of the top issues and most interesting stories is still the one of MILEY CYRUS‘ transition. But no, not from a pop-princess to a provocative ‘wannabe stripper’ as many are trying, it is about her transformation to a more and more bubble-gum-pop-escaping musician and one smart leader of LGBT (and A and I and + and in fact all other humans who feel different and discriminated) youth in our society.

From Disney Girl to Glitter Pearl

Do not worry, there will be no timeline here which explains the singer’s move from Disney Girl to Glitter Pearl, because A: eight out of ten here know she portrayed the perfectly innocent child star as a teen. Hannah Montana, to be concrete, B: six have seen her videos for We Can’t Stop and/or Wrecking Ball, as, back then, they were like car accidents you could not resist to check out, and C: maybe at least three – ok, let’s be fair – two of you had a listen through her 2013 released LP Bangerz, which was produced by the North American rapper MIKE WILL MADE-IT. For those of you who belong to the last small group just mentioned, you surely have recognized that the young artist’s intention was not to put out an album full of sexy and sweet talking chart toppers, but more of a fusion to hip-hop-orientated pieces with a load of country vibes here and there, which were a direct statement to her roots as a Tennessee native. Ups! There was the biographical part (hashtag sorrynotsorry or something). 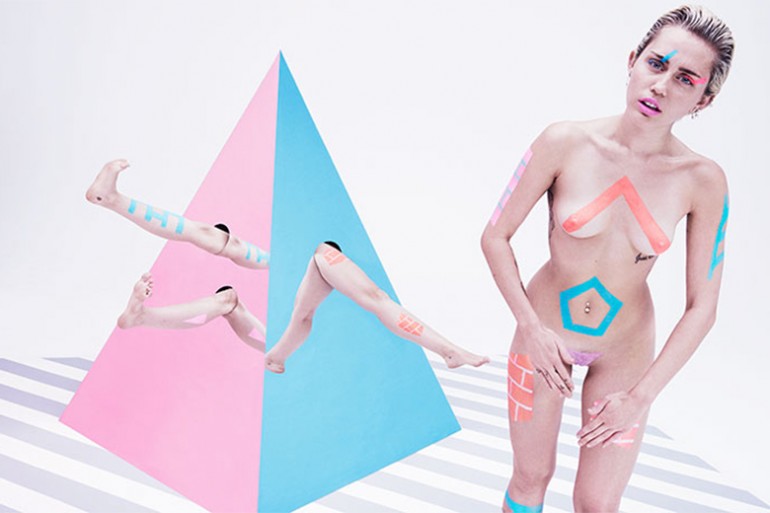 Photo by Paola Kudacki from the 2015 Summer Issue of PAPER

Anyway, the point here is that despite MILEY CYRUS‘ nonprofit ‘Happy Hippie Foundation’, which launched last year after the MTV Video Music Awards 2014, and her growing commitment for homeless youth around the U.S., last week ago the artist made a musical comeback by surprisingly releasing her fifth studio album called Miley Cyrus and her Dead Petz. Without any big promotion or pre-announcement. And for free on Soundcloud. Nice one.

The crowd got a first taste right on the VMA stage, when the singer performed the single Dooo It! live with a colorful squad of Drag Queens and other flashy figures. The sound? Well, bubblegum beats and a totally pop-orientated hook-line were missing. The only words you might kept in mind where ‘I’m smoking weed’ and ‘I love peace’. Or something like that. After repeating it over and over it finally stuck into your brain. The best part about it? It was actually very authentic and really what haters would never expect of her: to release music which is everything but airplay pop. 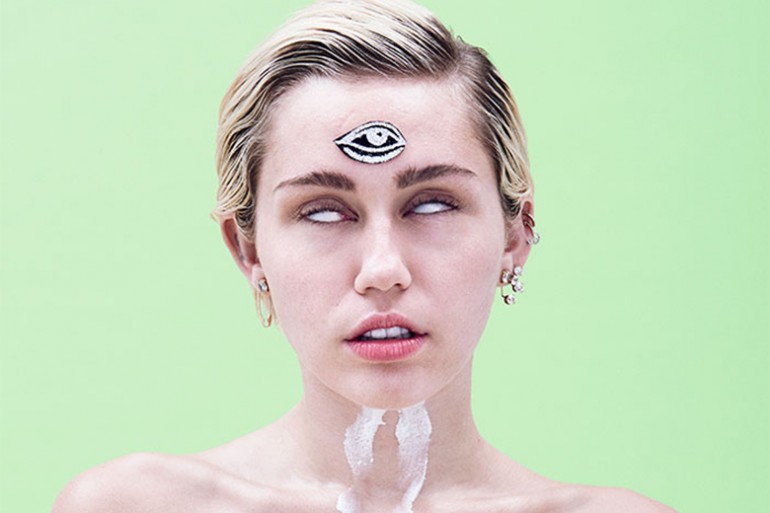 Photo by Paola Kudacki from the 2015 Summer Issue of PAPER

Ok, so why is this fact so important? Well, if MILEY would just release another pop record while doing all the stuff she were recently doing, e.g. posting all those crazy AF pictures of her house parties and pets, or speaking about gender roles and how she sees herself as a gender neutral, non-straight or non-binary person in her latest interviews, all of a sudden she would become one of the biggest hypocrites in the industry. For real.

So what does that ‘New-Miley-Record’ sound like? Well, it is dreamy, veeeery dreamy, a bit psychedelic as well but not enough to be called experimental, slightly pop, but perhaps due to the bass and drums, which stay constant and promise a bit of a catchiness in the melodies. All in all, a colorful sounding rave which fits perfectly to the artwork which shows the singer’s face full of glittery slime. Yes guys, actually it is a bukkake-pic (classy, MILEY, you know how to seal the deal). The lyrical content is wandering from sex (Bang Me Box), drugs and being completely baked to stories about her pets (The Floyd Song) or being just MILEY (Cyrus Skies, Miley Tibetan Bowlzzz). Most of the tracks were produced by CYRUS herself and American psychedelic rock band THE FLAMING LIPS, whose frontman Wayne Coyne by now already became a good friend of the singer. A few tracks were again created by MIKE WILL MADE-IT, like Fweaky or Slab Up Butter (Scorpion), and, surprise, there is not much left of the previous Bangerz-sound, except the more R’n’B-driven sound and fat bass compered to the other pieces. 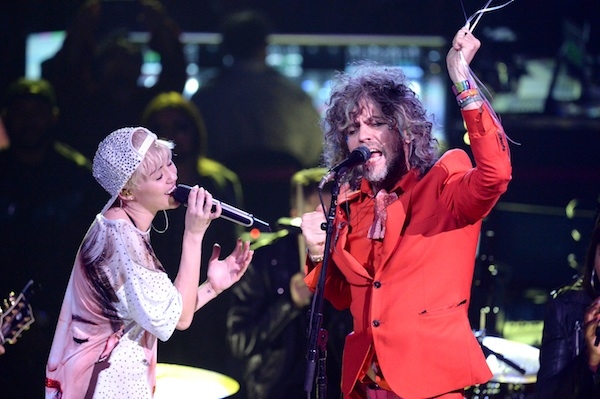 So yes, Miley Cyrus and her Dead Petz is definitely worth a listen. It is a journey through a supposed insane mind of a young adult/musician/actor/celebrity who likes to show off her tits in public and fighting for equal rights at the same time. But to be honest, she is doing it her way and more authentic than any other colleagues her age. We won’t even point out any kind of rating here, like we usually do with new released records, because this is not the intention of this article. It is about the singer herself and the change she is obviously hard working on. It will be even harder for her to convince the big names of music press about her changing style, most of them would probably call her new work ‘weird’ or just as another proof of her rebellion against her past. Without mentioning any source, one article even described her new album as a ‘project’, not an official release, maybe to keep the singer’s fan base, who is used to hear catchy pop songs from CYRUS, in line and not running away.

‘Some papers are calling her the next David Bowie.’

For those who follow this holy moly crazy chick on social media platforms, the album is kind of the original soundtrack to those. In the end, it all makes a bit more sense now. Well, and creates new questions, but maybe that is why MILEY CYRUS is still an interesting and almost surreal persona after all. Yeah, people might still put shame on her for deciding to put the record out straight after the VMA‘s, but for the record: since the promotional campaign for the awards begun and it was clear she would be the host, the show belonged to her anyway. And in the end she is a musician who wants to be heard like any other artist in the business, so why not put the one and only (verbal) advert live to million people who were watching it? No one said it is easy to be big and she is doing right to stay at the higher position. Some papers are calling her the next DAVID BOWIE. We do not know if it is not too far ferched, but we should be all definitely excited about the future of MILEY CYRUS. Something is telling us that there is a lot more crazy sh*t to come. Or maybe it is just her latest video.