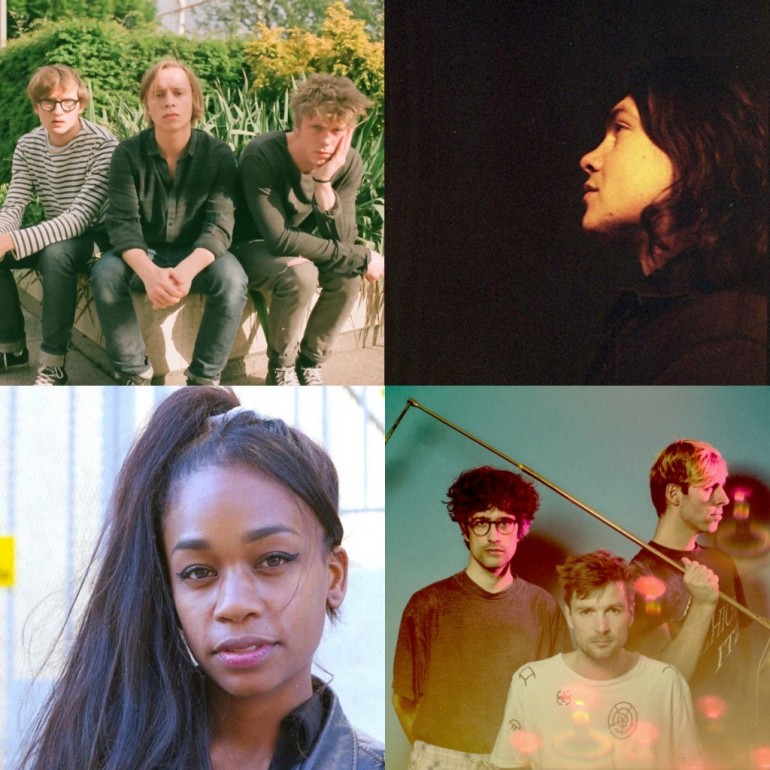 80s pop, dark wave and finest R&B all together in one track? Yes, that’s the electrifying mixture that gets our excitement. ABRA is the name of that young talend from Atlanta who’s already way more than just an inside tip. Her latest single Crybaby is a sensual and sinister piece of synthetic soul and is definitely argument enough to get us excited about her forthcoming EP Princess, out on July 15th via True Panther Sounds/ Awful Records.

We reported about TOOTHLESS, the new project of BOMBAY BICYCLE CLUB bassist Ed Nash before in our Weekly Discoveries. Now, Mr. Nash reports back with more material and a special guest. Beloved songwriter MARIKA HACKMAN joins him on Palm’s Backside, resulting in a really powerful little pop anthem that makes you instantly want more from TOOTHLESS, right? See for yourself right here.

We were a bit sad when Swedish tropical pop two-piece KORALLREVEN announced its split last summer. Now, Marcus Joons of the group returns with the help of ‘ORKID, Thanxxx, friends and lovers’ as he states it in the form of a new project YOO-YOO. And their first track Pet Shop Boys is not just a tribute to Britain’s greatest synthpop duo but also to the long gone pre-digital era of the 80s and the way we consumed music back then, but also one hell of a sweet summer tune. Looks like we found a new home for daydreaming synthpop sounds.

The/Das – ‘What People Do For Money’

It’s all about money, right? German indietronic group THE/DAS heavily agrees and dedicated its latest song to that faithful human invention. ‘What People Do For Money and other joint ventures’ is title and topic of the Manifesta 11, taking place as art Biennale in Zurich, Switzerland, this summer for 100 days, curated by the conceptual and video artist Christian Jankowski. The band provided the official song for the event and it turned out to be a really smooth and easy-going piece of summerly synthpop. Something you would definitely not assume when you think about that subject, right?

Cherish is a relatively new independent label in Stockholm that focusses on promoting the work of female artists, and one of their headline acts, SWEEEP, just dropped her debut single BABY SNAKE$ this week. We don’t really know very much about SWEEEP at present, save for the fact that she supported JENNY HVAL last year (and any connection to JENNY HVAL is always a good thing) and she describes her music as “the world where field recordings of stones and rain meet digital compositions”. BABY SNAKE$ is pristine, warped electronica, dubby beats, samples and nervous tension all mixed together into an deep-net meets club tune.

You should know by now that former KLAXONS member James Righton is releasing new music under the alias SHOCK MACHINE. He already gave us an entire EP and a psychedelic music video for Open Your Eyes. Now, that song gets an epic remix treatment. And once you get Belgian electronic heavyweights SOULWAX on board for a remix you know that things just need to get epic. The result is 9 minutes of Balearic grooves that should be essential in every DJ set or playlist this summer if you ask us.

Danish trio SLAUGHTER BEACH (Nikolaj Westi, Mads Emil Aagaard and Hasse Mydtskov)  put out the Love/Venice EP last year, a collection of shiny indie-pop anthems. Their brand new single, Glaze, shows that they haven’t lost their touch. What immediately strikes you about Glaze is just how big it sounds. It balloons into life, tumbling guitar lines and atmospheric synths combining before it all comes together into a sweeping, widescreen chorus. It marks a new step forward in SLAUGHTER BEACH‘s music: if they can keep coming up with songs that work on this scale, then they are about to go B.I.G..

When you have nowhere else to go, heading for the seaside might not be the worst idea. British songwriter HAUX did with his latest single and he came back with a tender piece of dreamy folk that goes hand in hand with lush electronic textures. Seaside feels a bit as if DAUGHTER and BON IVER teamed up for a track and that isn’t the wors fantasy a pop fan can have, right? HAUX’s debut EP All We’ve Known is set for release on July 8 and it’s waiting to comfort you on your next trip to the coast.