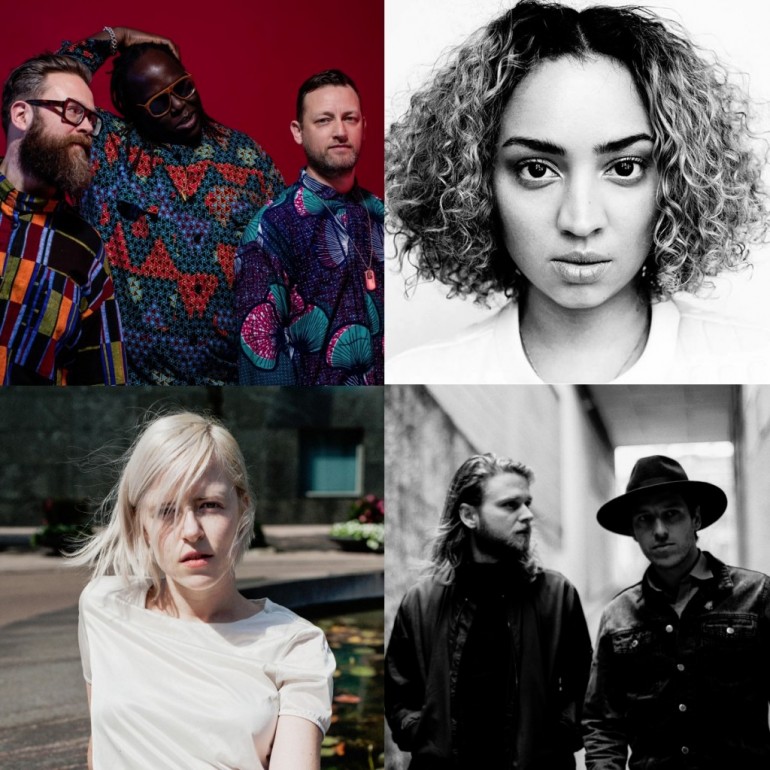 Sometimes there’s a happy end in pop music. Although Mike Lindsay and Sam Genders parted ways almost ten years ago when Genders left electro folk outfit TUNNG, the two gentlemen now reunite for a new project called THROWS. It clearly recalls the folky aspects of their original band and includes the psychedelic elements of Genders’s alter ego DIAGRAMS, but this is more than just your usual copy&paste. This is a really wonderful piece of tender music. A self-titled debut album arrives on June 10 via Full Time Hobby.

If that female voice in the new single by THE INVISIBLE sounds somehow familiar to you, you’re not entirely wrong. JESSIE WARE supports the trio on the grooving So Well. The song is a first teaser of the band’s new album Patience which arrives June 10 via Ninja Tune. According to the band the LP is about ‘joy and gratitude for being alive’ and you really can’t deny the positive vibes this new tune is spreading, right?

Crafted Swedish soul singer NAOMI PILGRIM is an old favourite of ours (we already chatted with her and asked her about her favourite songs), so we’re happy to have her back. Sink Like A Stone is the grooving title-track of her upcoming new EP which arrives on June 3 via Cosmos. And with it it might be only a matter of time before an international audience jumps on the PILGRIM bandwagon, don’t you think?

Personal Howl by ANGELA AUX exclusively premiered via NOTHING BUT HOPE AND PASSION two weeks ago. Now, the freshly released music video for the reduced lo-fi gem gives us another opportunity to put this talented young gentleman into the spotlight he clearly deserves. It’s a really well done animated music video. Wrap Your Trouble in Dreams is the name of the forthcoming ANGELA AUX which arrives on May 13.

Fans of delicate pop melodies with a certain nostalgic new wave charm, liszten up. TWIN WAVE from New York City and Matador are destined to find a spot in your personal Spring playlist. And if you’re looking for any metaphors, don’t bother as this one is indeed about the profession of a Matador. The track is inspired by Ernest Hemingway’s bullfighting-as–art passages in The Sun Also Rises. A new five-song EP by TWIN WAVE goes by the name Pour Out The Dark.

RAINDEAR, aka Malmö’s Rebecca Bergcrantz, is about to drop her debut album Embers, and it’s hard to think of a better way of drawing attention to that than her new single I’m The Ice. It’s a monster slice of noir-electronica, bursting into life with  tsunami wave of powerful synths. From there on it’s a muscular, cold pop song, slick production pairing Bergcrantz’s sharp, smart melodies with musical soundscape that rumbles with a sense of menace. Embers is out on April 22nd.

London producer ABSOLUTE.‘s press release states that his name must be spelt “always all caps, with a full stop”. This is a nightmare for a writer, as we live in constant fear of the red ‘bad grammer’ underline popping into our field of vision, but luckily ABSOLUTE. is more than good enough to justify the stress and nightmares that superfluous full stop brings.  His debut single Fairground is a song that plays with the listener, occasionally drifting into foggy atmospherics before the beat hops back in and locks the track into its groove again. It’s dark, murky club music, perfect for the dark, murky clubs where it will no doubt get plenty of plays. Fairground is out now, backed by a KDA dub remix.

Wanna hear something that will make you feel like a hideous underachiever? Of course you do. AMBER ARCADES leader Annelotte de Graaf not only makes amazing music, but has also worked as legal aide on UN war crime tribunals and is currently working on human rights law with regards to Syrian refugees. Of course, we aren’t qualified to comment on the quality of her legal work here (head over to our sister site, NOTHING BUT INTERNATIONAL CRIMINAL LAW AND UN TRIBUNALS for that), but we can confirm that her latest single, the title track of her upcoming debut album Fading Lines, is a beautiful piece of indie pop. Delicate guitar riffs shimmer across the track, and combine with de Graaf’s warm, intimate vocal to create a song that positively glows with charm and grace. The Fading Lines LP is out on June 3rd via Heavenly.

Carl Coleman und Caspar Hesselager are a classic case of ‘born in the wrong country’. The two Danes aka PALACE WINTER sound nothing like their natural environment but quite American. H.W. Running recalls the driven urgency of bands like THE WAR ON DRUGS and R.E.M., mixing Americana-styled songwriting with a psychedelic element. The result is quite an efficient recipe, we must say. The duo’s new LP Waiting For The World To Turn arrives on June 3rd via Tambourhinoceros.

We already enjoyed Moon, the first single off the upcoming new BETH ORTON album Kidsticks very much. Now, 1973 arrives and it’s a bit more grooving and uplifting but still remains highly majestic due to the protagonist. Her first album in four years arrives on May 27 and you better watch out for it.