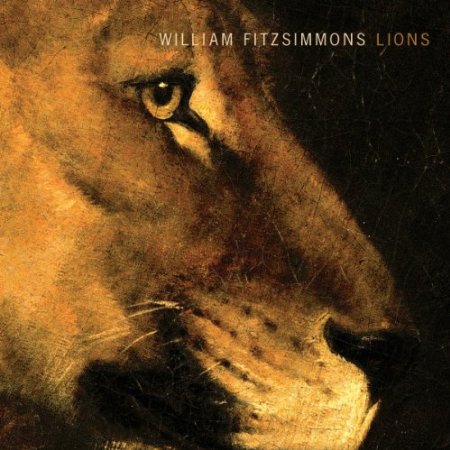 If you look back on some of the greatest comedians. They’ve all been very funny but also quite sad at the same time. But that’s what I want and that’s what “Lions” is to me. It’s about me trying to figure out how these two things work together.

These are the words the American singer-songwriter WILLIAM FITZSIMMONS used to describe his new record Lions in NOTHING BUT HOPE AND PASSION‘s recent interview with him. You can reconstruct these sentences after listening to the anticipated album. It’s happy and sad at the same time – “There is no singular emotion” as FITZSIMMONS himself would say. Lions is full of emotions – as we’re accustomed by the friendly beard lover: All his precedent five records are pretty sentimentally. With his mellow and comfortable voice FITZSIMMONS’s again creating twelve beautiful, heart-touching ballads. That’s all well and good but unfortunately there’s no big difference to the acoustic ballads of Lions predecessor Gold In The Shadow. It’s kind of what we expected from him and that’s regrettably un-spectacular. His music is really beautiful and sentimental but nevertheless at some points dreary.

Lions deals with too familiar singer/songwriter themes – love, home, fate and so on. Not that thrilling as well. Already the opener Well Enough shows that the songs follow the typical FITZSIMMONS style: decent guitar chords, his voice in the foreground, magnetic synthies inbetween and the lyrics “ I hope you’ll find wherever is your home.”

Josie’s Song seems to be one of the happier songs at the beginning but turns into a sad goosebumps-provoking ballad where WILLIAM FITZSIMMONS‘ voice sounds again although he hasn’t finished his former sentence – a beautiful way to intensify his words. Furthermore the pleasent female’s voice which we already know from Gold in The Shadow cannot be missed out- for example to find in the refrain of  Blood/Chest. Admittedly one song accomplishes it to break out of his regular scheme: Centralia starts witha noisy guitar intro but that’s only brief and then it turns into an acoustic track with discreet postrock elements in the background. Also Lions last track Speak modifies a bit – more piano, more spherical, very slow. It feels a bit like ‘never change a winning system’ right here.

WILLIAM FITZSIMMONS‘ new work Lions is touching, emotionally and honest as it’s predecessors. But is that enough? Don’t we need some diversion from time to time?