Back in 2012, when the two friends Frank Wiedemann and Ry Cuming released a track together, they probably didn’t expect to be the owners of a sustainable music festival, the producers of two successful albums, and one of the most acknowledged acts in the world of acoustic and electronic music merging within eight years. They likely also didn’t expect to have their tour cancelled or not being able to meet each other in person for months – but that’s another story.

Ry Cuming, alias songwriter Ry X, and Frank Wiedemann, one part of the German techno duo Âme, decided to join their creativity and sense for beautiful music to start the project Howling after the success of their first collective release; the name-giving track Howling. From that moment on, it took them three years to put together their first album Sacred Ground in 2015 which is also the eponym of their very own festival they started shortly afterwards. Finally, it took them another five years to release their second record, Colure. The album elaborates the unique sound they found eight years ago.

“What we did this time is more defined. That also means we deepened our way of communication. Creating music is like talking all the time but not really saying much. It always needs a little bit of time to find the common ground of working together. Even though Ry and I have worked together for a long time, there was a long time in between where we worked on other projects. With our first album, we were pretty much experimenting with the direction we wanted to go. With Colure we discovered our way to go with the project Howling and defined the music we like to present as the two of us. To generalize, this second record is more on point than the first one.” says Frank Wiedmann in the video interview I had with the two musicians a few days ago. 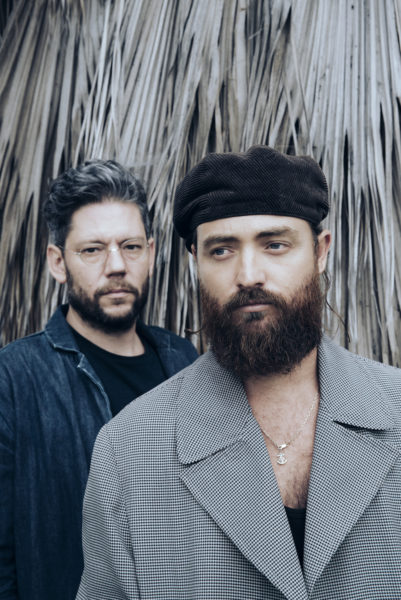 Although the two couldn’t see each other during the last few months (only virtually) the rise of the corona virus didn’t have a great impact on their new album Colure as they recorded all 13 songs in advance. “We were together pretty much the whole time when were recording the album over the last few years. The overall situation didn’t change back then. But the process changed because we changed as producers and people. We grew an understanding of our process and Frank had finished his studio in Berlin by then. Therefore, we had a home to make most of the material. I think whatever we have around us informs the way we create music, for example, what instruments we have or the energetic space where we are at. But those things have changed this album just a little bit, refined it maybe,” Ry Cuming explains.

Nevertheless, Howling are – like almost every other musician – effected in another way by the Corona virus. They had to postpone their tour to next year, which obviously is a shame for them and their fans.

Ry: “I was supposed to go out and start touring with Frank and putting together the live show. But they closed the borders two days before the flight. So it happened right at the time when Frank and I were going to reconnect. Since then, we just have been doing things remotely and we are planning different ways to share music. I’m hoping to get out there and be back in Berlin in the next couple of months to do a concept performance with Frank to finally share the album live.”

And that album, which at the moment is only available as a digital and analogue release, but not as a live experience, got its name Colure from an astrophysical phenomenon. It is not a misspelling of the word “colour”. It’s an old term for the point at which two different astrophysical circles meet – like Ry and Frank do.

“It’s about the two worlds, precisely the two circles that we both have in our worlds which find each other at specific points. If it’s in Berlin, California, online, or wherever, we find each other to create music together. We bring together our expertise for the project Howling. ‘Colure’ is almost the perfect album title for us,” says Frank. Some people might wonder how they came up with this title – the answer is simple: they just googled things that had anything to do with circles, as the word “circles” is overused in the industry.

The special point where the two worlds meet is the essence of Howling’s music, which floats somewhere between acoustic and electronic. For Frank, the essence of their sound is an electronic foundation combined with an acoustic soundscape, as he explains to us:

“We both love analogue warm sounding instruments and we like doing things that you’re maybe not supposed to do with them. For example, you have a digital drum machine and you don’t record in a digital clean way but rather in a way where it gets more grit, life, and noise. This what a Howling song sounds like from my perspective. And overall, to me, it’s important that people can dance to our songs.”

And Ry adds:” I think it’s a combination between what moves you on the sound level and what moves you on an emotional plain. To have these songs that make you want to move, to have this driving force combined with the emotionality defines Howling. When those two things come together it’s quite unique and we really enjoy exploring that space. As Frank said, I think we’re defining it and we’re continuing to define it more.” 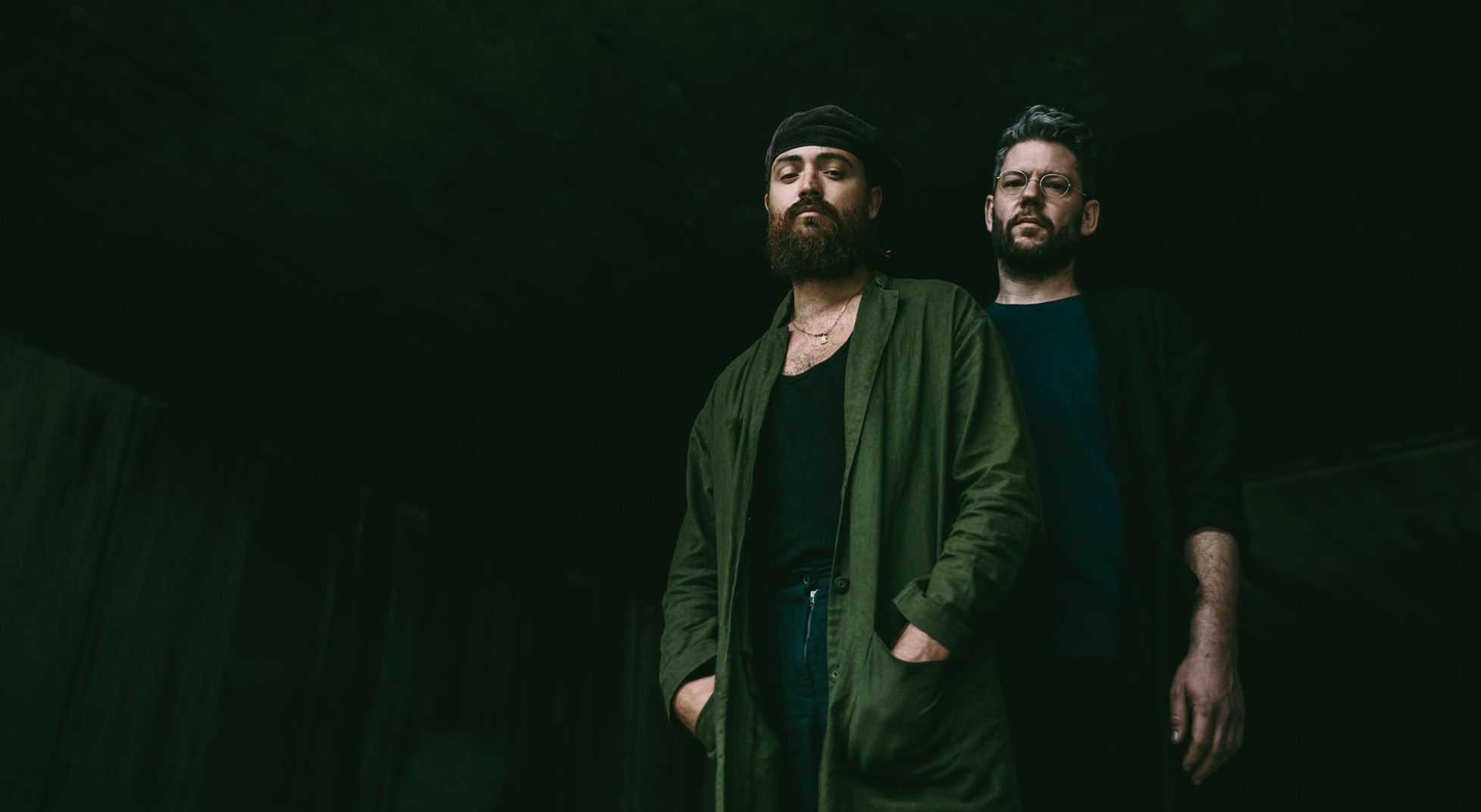 There is one song on Howling’s new album, which really points out the connection of Ry’s songwriter world and Frank’s electronic background: the new version of the already existing Ry X track The Water. Ry wasn’t completely content with the song he wrote a long time ago and thought about leading it into a different direction. So, he decided to ask Frank to rework it and the result is even better than the original version:

“It ended up being a song that belongs to both worlds. We thought it would be nice to pay homage to our very first track. It was a Ry X song first – because I wrote it down – and then Frank put his touches on it. In the end it belonged in both worlds. We wanted to do that again to link the worlds a little bit more. The result is, in my opinion, a much deeper journey. It evolves and opens the heart of the song. It’s fun to explore things that can live in different genres and spaces and share them in different times.”

At the end of our conversation, the at the moment pretty depressing topic Sacred Ground Festival came up. Like every summer festival in 2020, it has been cancelled because of the current situation. Although it’s a rough time for anyone who puts effort in organizing a festival, Frank and Ry stay optimistic about the development of their festival

Ry: “We’re growing slowly and sustainably in the right direction. We’re conscious about not wanting to become a big festival and we want to maintain the closeness and connection between people. Besides, we’re getting a lot better at understanding how the visitors create a platform where they can connect with their hearts open and expand their understanding of music, environment, consciousness, and awareness. The ground is incredibly fertile: whatever we plant there, grows. The next step planting bigger roots to refine the idea into something incredibly unique and special.”

Frank also shares his thoughts on the outstanding weekend: ”There is a great, opened minded community coming together for a weekend, but sometimes you just need a little something that connects the dots. At the festival, we have the right people to connect the dots and to inspire other people so that, in the end, they can take something away from the festival. We are planting a seed and then growing it together. And I think that’s exactly what makes the festival more than a weekend of amazing music.” And Ry adds:

“It is a much place of people connecting deeply. They leave with the experience and it actually changes them into feeling more connected to what they want to do with their lives. We really want try and cultivate that.”

We can just hope that it will be possible to have special weekends like the Sacred Ground Festival in 2021. But even if festivals won’t be possible in the way they used to be, there will always be artists like Howling who think about other ways of sharing music with people. And one thing is sure: they will continue creating beautiful music that touches you even without having a live experience.

Colure is out now via Counter Records.