Emo Never Dies: Introducing American Football And Their Sub-Genre To A New Generation

Occasionally music throws up incredible stories filled with – if you’ll excuse the obvious pun – hope and passion that we pride ourselves with telling at NBHAP. American Football, the project that emerged in the late 90s from a small basement in Urbana, Illinois, an axis point of America’s midwest, is one of those stories. Of course, by the time that American Football first formed in 1997, this wasn’t any of Mike Kinsella (Cap’n Jazz, Joan of Arc, Owen), Steve Lamos (The One Up Downstairs, The Geese) and Steve Holmes (also The Geese)’s first rodeos.

However, the original run of American Football exists in a fascinating time in alternative-rock music. The internet hadn’t quite exploded and shaped the way all of us would consume music for decades to come, however, they also existed after the post-Nirvana explosion had died down where major-labels stopped showing interest in small-yet-exciting indie rock bands. The result? These bands returned to their DIY roots to create something new and creatively liberating.

A decade earlier, before the explosion of ‘grunge’ (nee ‘indie’) with the likes of Nirvana and Sonic Youth, a very similar movement occurred. After the original run of punk music died and quickly as it came at the end of the 70s, the genre splintered into various subgenres and movements now the spotlight was away from them. The most successful and well-known is ‘post-punk’ – due to it’s cleaner sound and melody-laden nature – but these years also created the noisier and more experimental branches such as New York’s Sonic Youth or LA’s Black Flag who invented what came to be known as the more aggressive ‘hardcore punk’. In Washington D.C, the Ian MacKaye-led Minor Threat formed in 1980 and provided the East Coast’s answer to Black Flag, who created a scene centred around other young bands in the area on his self-run label Dischord Records.

By 1985, however, Mackaye and co had grown weary of the hyper-aggressive nature hardcore punk had evolved into, with shows often descending into violence where young people seeking an excuse to let their Reagan-era frustrations out, so they decided to change things once again. In what they called the ‘Revolution Summer’, Mackaye’s new band Embrace, along with Rites of Spring and Dag Nasty – members of each of these would later go on to form Fugazi – developed a more ’emotional’ hardcore sound which took the energy and passion but added the jagged textures yet melodious tactic that the poppier branch of post-punk employed. While everyone involved hated the term ’emo’ – Mackaye claimed it was a stupid term because all music should be emotional – this is what is historically known as the ‘first-wave movement’.

The cult of the ‘second wave’

Due to Nirvana’s unmitigated success in 1991, the majors swept the ocean floor for the various DIY scenes that had emerged across America in the 1980s for supplemental talent. For every Pearl Jam, Soundgarden, Stone Temple Pilots and Alice in Chains, there was also San Francisco’s Jawbreaker, San Diego’s Drive Like Jehu, D.C’s Jawbox and Seattle’s Sunny Day Real Estate, bands who emerged from the emo scene and unexpectedly found themselves releasing major label records often to critical but little commercial success. As a result, the next generation made a conscious decision to return to the DIY approach in the mid-90s after seeing their peers struggling on the majors. Largely centred around America’s midwest, this became known as the ‘second wave’ of emo, in which American Football would become a key component. 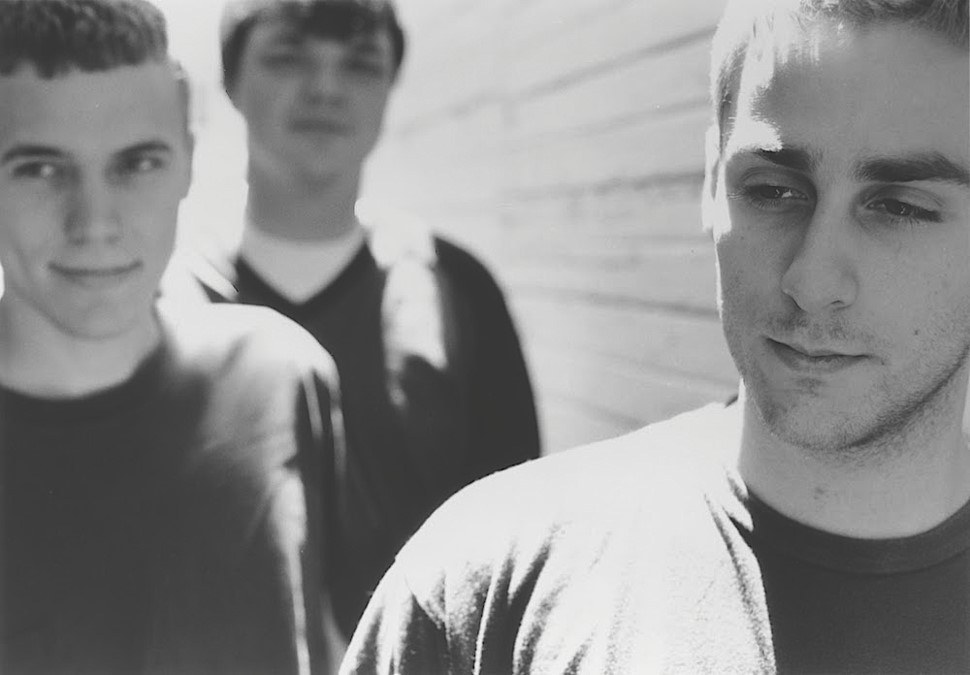 Frontman Mike Kinsella along with his brother Tim had already formed a cult following in the greater Chicago-area in the bands Cap’n Jazz and Joan of Arc throughout the 90s, and they weren’t alone in developing this scene and sound. The Promise Ring, Braid, The Get Up Kids, Cursive, Mineral and a young Jimmy Eat World all formed across the American Midwest during this time, sharing a more melodic punk sound combining more intricate time-signatures with personally emotive lyrics. While studying at the University of Illinois at Urbana–Champaign, Mike Kinsella formed his new band, American Football, as the lead singer-songwriter, after being the drummer of Cap’n Jazz and Joan of Arc behind his brother Tim.

Kinsella and the two Steves spent hours on end in the basement of the house pictured on what would become American Football‘s debut record, rehearsing long, intricate and dreamy songs, a departure from their punk contemporaries. The trio pushed their sound towards the likes of Louisville’s Slint or Chicago’s Tortoise, known for their atmospheric yet emotionally resonating music.

Kinsella’s confessional lyrics and delicate delivery gave him a distinct voice, while the band during their original three-year run put far more emphasis on perfecting their sound in the studio rather than playing live.

The results came in the band’s self-titled EP, released in 1998, and LP in 1999, immediately becoming the soundtrack of hundreds of heartbroken young adults walking around forlornly in the late summer/early fall. One only has to listen to the album’s opening track Never Meant to immediately feel what this remarkable album had to offer. A snappy drum fill, a count in, two duelling guitars and a now infamous opening line (‘Let’s just forget/Everything said/Everything we did/Best friends and better halves’) and Kinsella, Lamos and Holmes created instant magic over nine heart-breaking songs that packed an emotional punch while being musically challenging.

The record was an instant success within the Midwestern American emo scene, even getting some college radio airtime. However, as the band purely existed as a side-project while at university, they split up shortly after in the year 2000, after only playing a handful of shows around the Illinois area. Kinsella returned to Chicago where he rejoined Joan of Arc and began his solo project Owen, a project which is many ways continued the spirit of American Football. Then, almost a decade after the emergence of Nirvana and the alt-rock movement, a resurgence occurred in the early 2000s, and this time, ’emo’ was being openly cited.

2000’s Relationship of Command by At the Drive-In and 2001’s Bleed American by the already mentioned Jimmy Eat World saw an upsurge in interest in the second wave emo scene that had been growing in popularity across the states, shaping a renewed interest in punk and indie-rock which would go on to define the decade. This, coupled with faster internet speeds allowed for greater access to music which as recently as only a few years prior remained largely geographically specific. Suddenly, more and more people discovered American Football‘s debut record, amongst many others from across the decade, as curious, younger listeners downloaded these albums from music forum recommendations.

As the decade wore on, these word-of-mouth recommendations only allowed the band’s cult status to grow, something that occurred multiple times over the decade, with a countless amount of 90s bands reforming for big festival paydays and occasionally even returning to create new music. Eventually, the hope for American Football to return grew to a fever pitch. In 2014, fifteen years after the release of their debut record, the band announced a reissue of their LP with a handful of shows, both of which sold out immediately. The following shows in the US and UK were special events, providing an entire generation of music fans the opportunity to share these much-loved songs.

After a year-long tour, the band re-emerged in 2016 with their second, also self-titled album much to the surprise and excitement of their now larger fanbase. LP2 saw the band update and mature their sound from almost two decades ago, producing a record which was still distinguishable as American Football, but replacing the sense of teenage loss and wonder with a more adult-minded prospect, in line with the band’s actual age. The band’s return album was by all accounts a success, but it in comparison to their legendary debut, didn’t push the boat out too far.

This week, American Football release their third full-length record, and it is something of a masterpiece. Free from the shackles of the ‘comeback album’ there is a marked improvement in invention and confidence now the band are comfortable in themselves. During an interview around the release of LP2, Kinsella noted that ‘in many ways, this feels like our first proper album’ and it showed. LP3, however, sees the band push their sound further once again, incorporating elements of shoegaze and jazz to create a gorgeous, atmospheric record that stands up to their debut. The songs here, such as Doom in Full Bloom, are better realised, pushing their foundations while retaining their notable emotional punch.

Part of the album’s success comes from their collaborations, such as Slowdive‘s Rachel Goswell on I Can’t Feel You and the spectacular lead-single Uncomfortably Numb featuring long term fan and beneficiary of the emo genre tag, Paramore’s Hayley Williams. Part of what made LP1 magic was the emotial power conveyed through its timeless, universally touching lyrics and it’s beautiful, analogue production. While LP3 is certainly bigger in terms of production, they have re-kindled that spirit of loss and heartbreak we all experience, with a more mature perspective. It has been wonderful to grow up with American Football and if the band’s second album was a re-introduction, their third is a re-invention that could well see them gain an even more passionate following for years to come.