In the middle of the night sometime before the outbreak of Corona when you could still stroll over to someone else’s house to have a beer, I cross the busy streets of Berlin’s Neukölln – two beers in my bag – on the way to find the doorbell labeled, Kruger. It is five to ten. I hang around the front door of Lucy Kruger, for a minute, drawing one last drag from my almost burned to a butt cigarette. My fingers are reddened by the icy winds that haunt the streets in early March. I do not like being overly early. One minute before our appointed time, I ring the doorbell and Lucy invites me into her home.

Both of us are a little tired when we sit down on the couch in the artist’s cozy room. Mattress on the floor, scribbles on the nightstand, and several guitars leaning against the wall next to a keyboard – it is just what you would expect the home of a Berliner musician to look like. The cold beer in my still frozen fingers wakes me up a little. The setting for our second Late Night Talk is even more intimate than the last. I feel honored by the fact that Lucy opened her private home up to allow this special interview to happen. 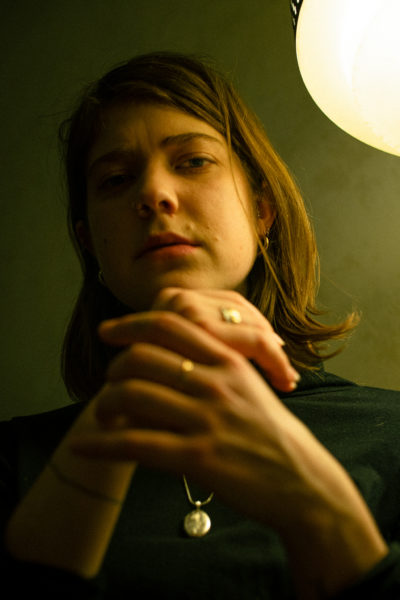 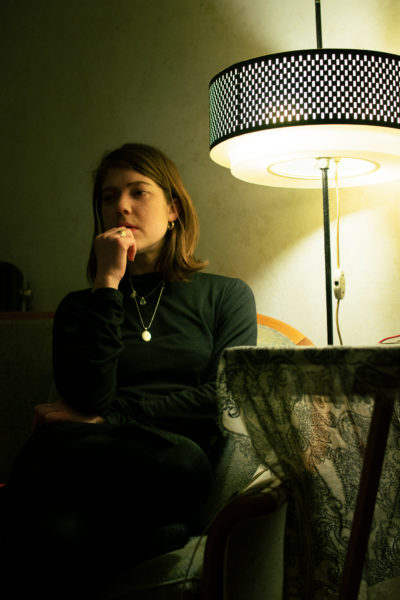 The artist leans back on the retro style couch, knee drawn up to the chin, and takes a sip of her beer. And, after I am done going on about how cool the Gibson guitar on her bed is, she answers my question with patience. Lucy Kruger’s voice is exactly what I expected it to be. She speaks the way she sings in tender contemplative sentences just on the brink of turning into a whisper. When thinking back today, I remember how carefully she worked to choose the words she used, gazing almost through the walls of her room and into another world entirely, before she opens her lips to speak.

The musician moved to Berlin around a year and a half ago directly after she recorded her solo debut Sleeping Tapes For Some Girls. Arriving here from South Africa was quite the transformation, she tells me. The process of getting a visa, especially as an artist, is hard and she is still struggling to meet the means. ‘It was quite a challenge to get here,’ she looks at me with fierce determination. ‘I think because of that I don’t leave too much room  for questioning whether or not I want to be here anymore. It’s helpful in the way that it forces me to focus on something, as opposed to constantly contemplating alternative choices.’ I agree, the choices you are confronted with – the luxury of choice – is overwhelming in both the positive and negative way. Lucy, who came here to make music has to keep making a living in her field to keep her visa going, forcing her, in a good way, to work harder on her creative output than others might (don’t look at me). 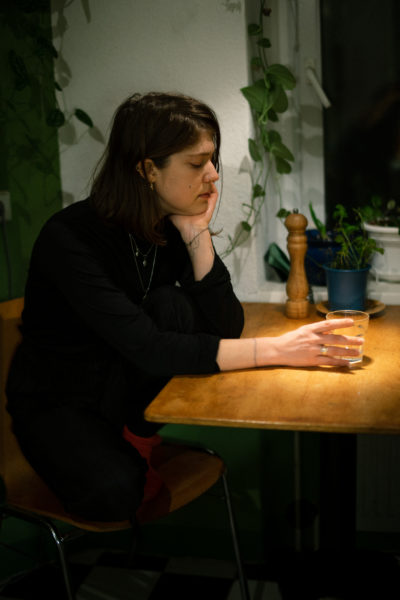 Moving on to summery days in Berlin, staying indoors and socially isolated becomes a harder burden to carry. ‘I remember people speaking about this kind of Winter depression in Germany and how it catches up with you. In Winter people walk past each other in a different way – not looking up,’ Lucy tells me. When moving to a foreign city, not speaking the language, not knowing the culture, it can be especially challenging to acclimate. ‘It takes quite a while to build up stability. That is the downside of moving around. It is overwhelming to be in a new place again with nothing to fall back onto. I am a rather introverted person and quite impressionable, so it is really helpful to live with people who are able to be still.’

Summer Is Not that Simple

Back when we met, summer was still far away. ‘I am a strong advocate for winter’, the musician laughs. When the sun sets early and the winds are cold, there isn’t much pressure to go outside continuously and you can dedicate time to yourself and other things. ‘It can be a really good time to take time for yourself. Summer is very distracting.’ Listening to the music Lucy Kruger releases – the somber progressions and mellow whispers of her voice – it sounds like a warm blanket in cold days. The way she softly strokes the Gibson guitar (stolen from her father, she confesses), reminds of a warm nocturnal ocean breeze and the sudden coolness of the sand under your toes after a hot day. Her LP Summer is Not That Simple speaks exactly about that darkness we fall into in summer and how a certain summer depression can sneak up on you. ‘Summertime sadness is a little harder for me to bear. It almost is shameful or not allowed, I feel. There is no room for it. Winter is a shared sadness.’

Lucy agrees that The Sleeping Tapes as well, fit more into a wintery setting and carry the melancholy inherent to the cold and dark days within each note. ‘This is just my way of songwriting. It comes from necessity. When I am content, there is very little to work through and to get out. It is the difficult things that you have to do something with’, she tells me while playing with her silver necklace. The sweatshirt sliding down her forearms reveals a selection of finely poked tattoos, one of them being an outline of a Joni Mitchell portrait off the cover of her debut album. ‘I love her’, Lucy says about the iconic musician.

‘You have to record the stuff not too long after you have written it because you move onto a different moment in life, a new feeling, and you could end up pushing the record closer to that,  when it actually wants to keep what it had.’ 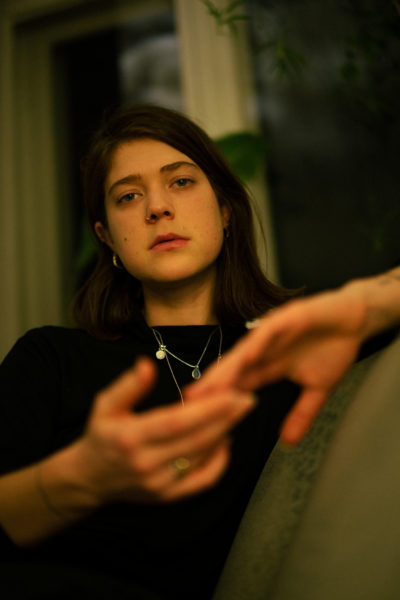 When listening to the Sleeping Tapes it almost feels like being in the same room with the singer she softly narrating her stories. ‘The Sleeping Tapes are the songs I wrote in the bedroom of my bedroom’, Lucy opens up. Hitting the nail on the head with the expression, she refers to the utmost intimate space even within the privacy of your bedroom. ‘Those are things I wrote just for myself’. But by sharing them, the artist lets us into her personal, almost diary-like experiences. While the lyrics speak off her personal experiences, everybody has their own point of view and experiences to interpret into the music. Nobody listens to music the same way and that provides a safe space for the artist to dig deep into her soul, knowing that where she finds meaning others will too.

‘The music comes from the inside of my inside. It is strange sometimes, but I also love that people have this secret. You are just trying to detail your experiences so that you can give them to someone else. It is pretty simple. Just about human connection.’

‘Does the moon see me?’ She croons on one of the tracks. The image of the moon keeps coming back to her and even made it permanently onto the artist’s skin. Her forearm reads ‘Sonic Witch’ in clear letters accompanied by a thin drawing of a finger-nail shaped moon. 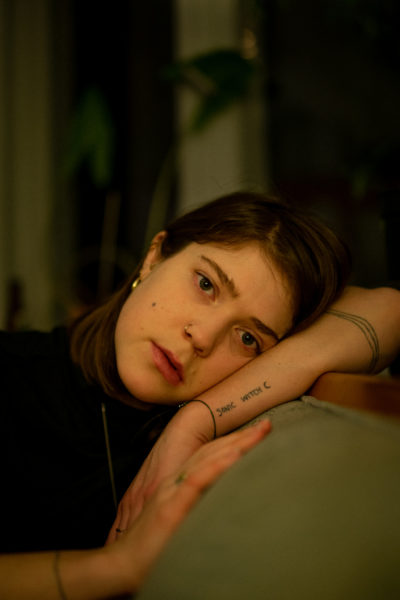 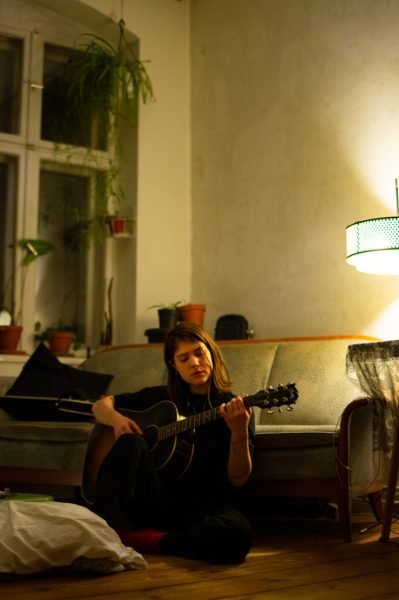 The Strangeness of Being Alone

Throughout the recordings of Lucy Kruger, she finds themes that keep recurring, like winter, nocturnal settings, and general melancholy. You can almost taste the, a bit too, lonely nights when listening to the album. ‘I thought a lot about the strangeness of suddenly being alone when you have not been for a long time’, she tells me. After breaking professional and personal relationships with the other half of the duo Medicine Boy, she found herself alone with her thoughts. ‘I was alone again with my body and my mind, trying to remember who I was without the other person. Like something essential was missing. For a while I had ignored myself and the songs felt a little bit like trying to chat with myself again.’ 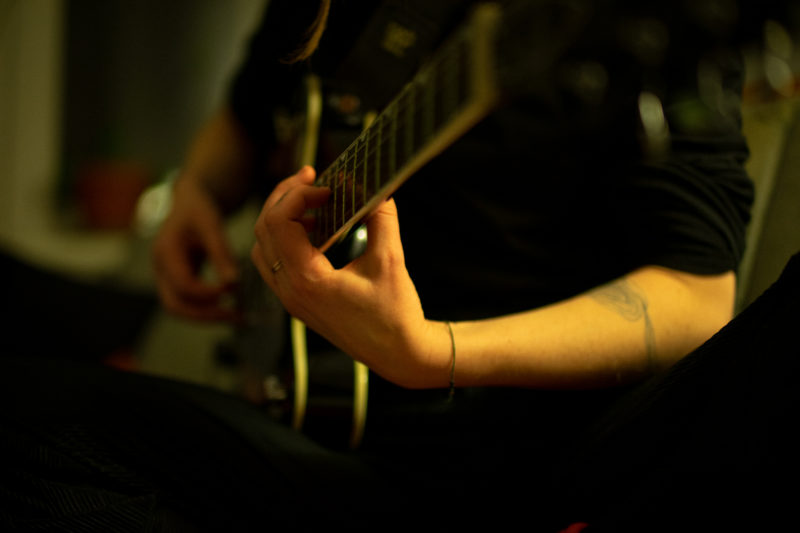 The poem stuck to her wall, ‘The Secret‘ by Denise Levertov, is something that helps her pull herself out of the slump of, what she fittingly calls, ‘boring anxiety’. Again, the way Lucy expresses herself amazes me. ‘Boring anxiety’ simultaneously addresses the fear of being bored, the fear of creating boring things, and being bored out of fear of being boring. Those can be crippling to any creative. Amidst her shared winter sadness and her summer depressions, the Sonic Witch applied her magic to those sentiments and turned them into beautifully haunting pieces of music. 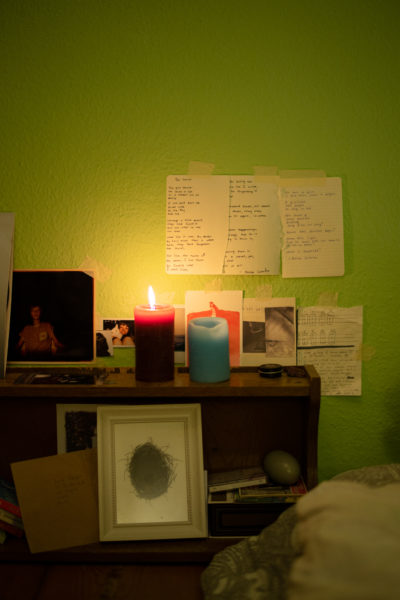 Nightstands are an intimate piece of furniture, probably the most intimate I can think of. Next to the poem, I find two candles, a stack of half-read books, an old photograph, Dutch guitar-tuning instructions, and a tiny tin of Nivea cream. When I ask about the mysterious black pencil drawing, the Sonic Witch laughs. It is something a friend found and gave to her. ‘I like it because my friend gifted it to me thinking that I might like it. It’s a little nest. She found it on the street, which is really sweet, but it also appears a little demonic’, she jokes.

Then the artist picks up her beloved Gibson guitar and starts playing. Her fingers marked by small tattoos move along the frets of the wooden instrument slowly and with the elegance of a ballet dancer. When she opens her mouth to sing, the words are but a mellow hush, the breeze in the night that I came to love on the records, as well. A Winter Coat, I believe, was the single she played for me within the intimacy of her bedroom. It was probably the most personal concert I have been to. Legs crossed, sitting on the floor of Lucy Kruger’s room, the tender vibrations of her guitar strings seem to resonate within my body as well. And the Sonic Witch sings in quiet magic spells.

All Photos by Liv Toerkell for NBHAP.