It’s midnight in Berlin. Well, almost midnight and I am on my way to meet the German musician and composer Niklas Paschburg. Always a little late, I have to walk with a speedy step through the district of Friedrichshain, which was still bustling with people in late February. I finally arrive at Macondo, the bar picked by Niklas, only a few minutes before our appointment. Admittedly, I am a little nervous because this is the first time, I am holding an interview in a setting like this. But why not chat with a Berlin-based artist in a relaxed Berliner bar instead of in a neat backroom of some label, I figured.

So, let me introduce the concept. The middle of the night is a mystical time. It is somehow not really yesterday, not today anymore and not tomorrow yet. In this vacuum, the way we view the world often changes to a more somber philosophical look on things. We meet musicians in these late-night style settings, to break out of the regular dullness of press appointments and to get to know them and their music beyond that. During his extended touring schedule, Niklas Paschburg found the time to sit back and have a chat with us about his recently released album Svalbard. 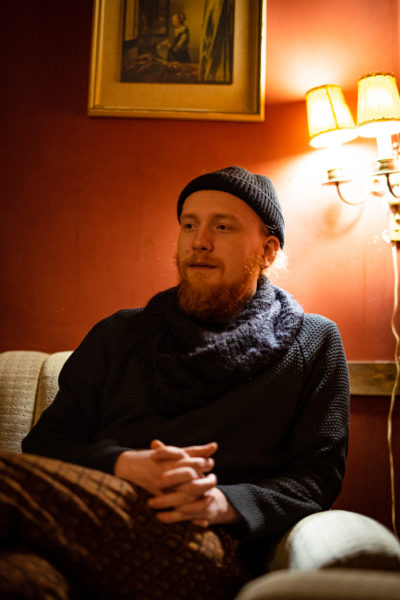 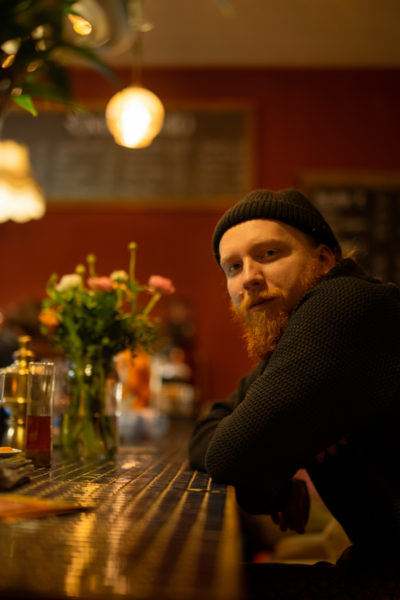 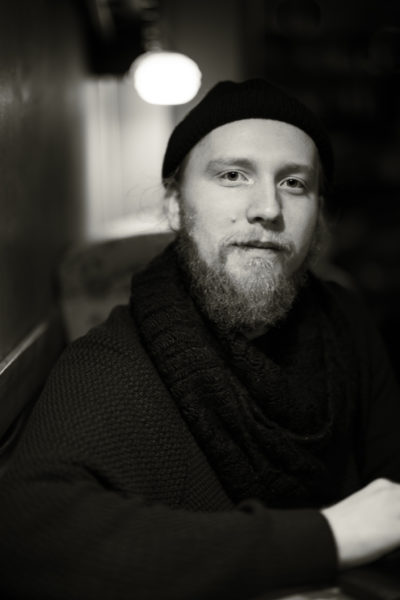 Like his previous record Oceanic, the current LP was recorded entirely on the road. Where Oceanic was set by the ocean, Svalbard saw the artist move into creative isolation for two weeks on the island, the furthest north on the globe. Influenced by his surroundings, Niklas Paschburg created an album marked by the coldness and dark of the northern regions. For the minimalistic ambient sounds, he mostly used the piano.

‘I am struggling with the name ‘Neo Classic’ because it implies that the music is a new sort of classical music. I would not consider my music to be contemporary classical music, instead, I think something between electronic, ambient and even indie is more fitting.’

When philosophizing about the genre Neo Classic, which already caused similar reactions in other musicians, Niklas finds that his style of composing is more influenced by jazz. ‘I improvise a lot and that is something that you rather find in jazz than in classical music. Sometimes I move away from the long and complex style of composition that is associated with classic and draw even from things that have pop structures.’ These approached towards music-making, driven by emotion rather than a need for complex instrumentation, make the artist’s musical style extremely accessible.

The eye of the storm

Cyan, for example, one of the tracks with the largest dynamic ranges on the album, tells the story of a snowstorm that surprised the artist on his way to the studio. Moving form calm and minimalistic to outbursts of sounds the single turns these experiences into music. It shifts from very quiet to even aggressive tones. ‘It really surprised me how close the force of nature can be felt on the island. At minus 35 degrees you can barely breathe anymore because the cold air stings in your lungs and when the snowstorm breaks loose, it just hits you in the face with an incredible intensity. At some point I couldn’t see anything in front of me anymore and had to hold on to the rim of the bridge I was crossing to not be blown away. There I had to wait it out. When the storm finally passed my entire beard was frozen’, Niklas strokes his fiery red beard reminiscing.

‘You cannot know what you’re up against when it comes to these forces of nature. At that very moment, I found it as scary as fascinating and even got a slight feeling of madness where I almost had to laugh. it was a very surreal experience and reminded me of how small we are against nature.’  That, he goes on, has influenced the writing process of the entire record. Between fear and fascination for nature and its immense power, Niklas Paschburg worked these existential emotions into the album.

Of Isolation And Inventiveness

Whereas today we might curse the isolation we are stuck in, for the writing process of Svalbard, that was exactly what the musician sought out. Instead of the usually busy districts of Berlin, nature and its quiet serenity are what inspire Niklas. And that is not farfetched. If you listen to the songs by the artist, the somber and organic arrangements remind of frosty seaside winds or the smoothness of freshly fallen snow rather than the pulsating veins of Berlin. But, of course, like anyone who moves here, the city did leave its mark. Bathing in Blue, for example, explores a more electronically orientated territory than we are used to from the artist. On songs like Opera, Niklas Paschburg experiments with the accordion his grandfather gifted him. Without having a traditional concept of how to play the instrument, he freely explores the sounds it can make. ‘It was refreshing to write on a new instrument, and it gave me the chance to find something new outside of the usual structure that I have with the piano.’

In creative isolation, the artist found may other things to experiment with besides the accordion. Like that the LP turned out to be the very first record featuring vocals by the artist. Vocals you ask. Yes, I was surprised too, but Niklas explains that he distorted his voice until it was not distinguishable as that anymore. Those who listen closely might find the quiet hums on Little Orc and the evening held another surprise. Where I thought I had detected violins was something entirely else. What sounds like violins is an instrument that the artist invented himself. At first, I joked about it, but he utilized the strings of a grand piano to create a violin-like sound. ‘I stroked the strings of the piano. To do that I had to – this sounds a little cruel – break the bow of a violin and twist the horsehair through the strings of the instrument.’ To get the sounds he wanted, Niklas then simply had to pull on the ends of the horsehair.

What might seem closer to us now, was still pretty far away back in February when Niklas and I set out to do the interview. The extreme state that the entire world is in right now, puts things in perspective and forces us to slow down a little. That is what Niklas found as well in the solitude of the northern islands. ‘What I found especially enticing is that in such areas, it is not always normal to survive. Svalbard is so far up north that without electricity you could not survive there. It simply gets too cold. They have an evacuation plan than they have to follow if they ever have a blackout. It is such an absurd place to live, actually because it is not meant to be inhabited. This daily sort of risk and danger gives life on the island an existential touch that we sometimes get detached from living in Berlin.’

The island – look it up on the map – is further up north than I expected. Almost as far as the north pole, it does not have any vegetation. It is snow and ice. In conditions like these, the daily life of the people changes. I have never experienced such areas and was therefore very interested in the experiences of the artist at this place where the sun never rises. ‘All the cars and houses are always open’, Niklas shares another anecdote. ‘In extreme situations like a snowstorm or a polar bear in the region, you can always find refuge. I think you can only survive in these places if you have a strong sense of community. You cannot fend for yourself in these situations. So, you could imagine that the crime rate there is an absolute joke,’ he laughs. 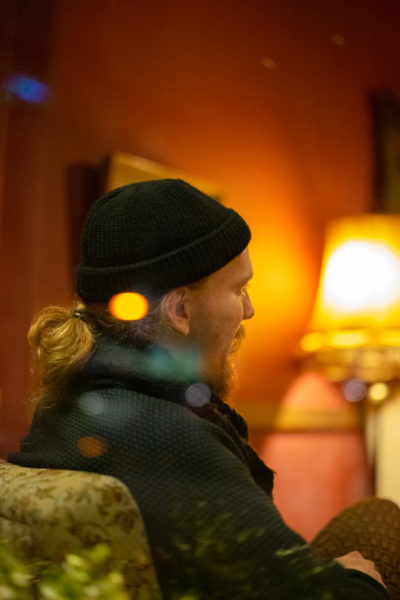 When Niklas Paschburg boarded one of the few flights heading to Svalbard, he already had an idea for what the album was supposed to be but started working from scratch. The area surrounding him had a bigger impact on his songwriting than he expected. ‘When I first arrived, it took me a couple of days to get accustomed to the dark. It was very confusing for my mind and biorhythm. The first day I spent waiting for something to happen but the light did not change at all.’

Stuck far up North in the middle of the endless night might seem like a nightmare to a few but to Niklas, ‘the night has something magical’. Admittedly, isn’t that why we stay up late and romanticize the early am hours in melancholic songs and movies? ‘Especially for creative things the night is a great time’, Niklas goes on. By now the time has moved dangerously close to midnight and the bar around us is starting to empty. ‘At night you have a different perspective onto some things. To me, it is a feeling of complete isolation when everybody else is sleeping and you are on your own. Then you have absolute creative freedom.’

Niklas already knew that for the current record, following Oceanic’s seaside experience, he wanted to write in the cold. That and the search for a place where it is sure to snow led the artist to the northern parts of the globe. ‘Here I find myself mourning the sun when it sets early these days’, Niklas says looking out into the dark that had already set over Berlin in the late afternoon. ‘But there I was utterly fascinated by the dark. Firstly, because it is dark around the clock and because the landscape there is surreal.’

In his two weeks up in the North, Niklas did not encounter polar bears, which visit the village on a semi-regular basis but did see the northern lights. ‘It was an absurd experience. The lights are so green they look incredibly artificial, but they are a work of nature,’ he beams. ‘In Svalbard, when you drive outside of the village where there are no lights, it does not look like Earth anymore but like Mars or another absurd Planet.’ In the middle of the endless blue, is where Niklas Paschburg found inspiration. The color also worked its way into the music with tracks like the mellow Bathing In Blue or the stormy Cyan. There is a touch of nostalgia and melancholia inherent to the shades of blue. In Svalbard, everything is literally dipped in blue because you never see the sun and only the stars provide a little light, the musician tells me. ‘That is the kind of vibe I wanted to capture with the album. That is why everything around it is blue. It is the blue album.’

All Photos by Liv Toerkell 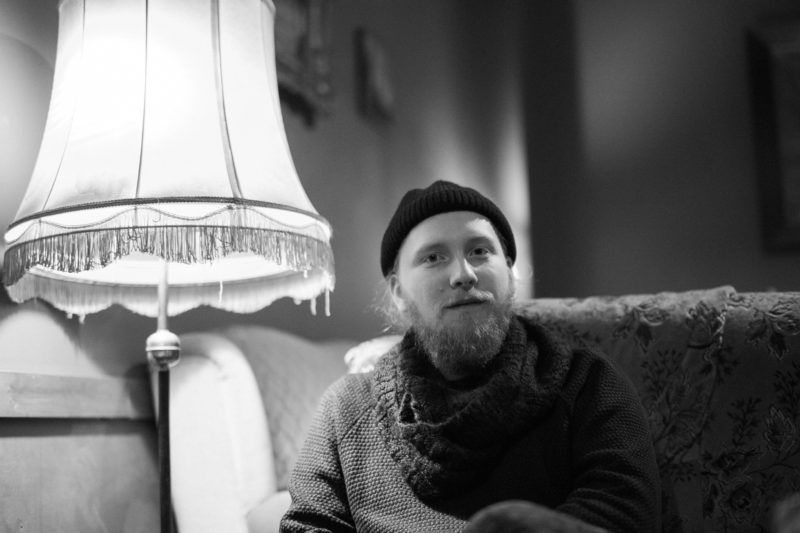 Svalbard is out now via 7K!.