Don’t let the imagery fool you. Although the artwork of Destroyer‘s thirteenth full-length shows mastermind Dan Bejar in a traditional pop crooner pose the reality looks a bit different. Yes, even after over two decades of releasing music under his alias and almost ten years after his critically acclaimed breakthrough album Kaputt Bejar is still struggling with his role in the pop world. Shall he embrace it or reject it? If you ever witnessed Destroyer live you can literally witness Bejar’s struggle on stage; he likes to hide behind his massive live band and rather gives saxophonist Joseph Shabason the place in the spotlight. So, yeah he might appeal like a grumpy old outsider, his lyrics are often cryptic and quite bleak but then there’s also this undeniable truth: Destroyer‘s music is basically pop in its purest form and his new album Have We Met might easily Bejar’s most accessible release so far. Well, he can’t shake off the ambivalence so he’s not even trying anymore as he confirms to me with a gentle smile when we discuss his new album on a cold winter day in Berlin.

“The music is the physical part of me,” he says and he can’t control its results. “There’s this conflict within me that I feel very apart from pop music and the pop tradition yet I know it’s in me, even if it’s not in my writing,” he tells me. “But it’s in the chords I use, the arrangements I compose. I’m attracted to it, I tried to get away from it but it’s there all the time. I don’t mind the struggle. I like to contradict myself.” Bejar smiles again, something he does frequently on the Monday morning we met up. He carefully picks his answers and you sense how he thoughtfully considers what to say, at least at the beginning. He’s naturally drawn towards pop without specifically following its formula. “I still don’t know how to write a chorus,” he says while laughing, “The closest I get to it is by repeating stuff over and over again at the end of a track.” He does that a few times on Have We Met but not as excessively as one might think. The new Destroyer record is the closest attempt to recreate the vibe of the Kaputt but of course that was never the intention in the first place. Instead Bejar wanted to move away from the band cosmos and created the songs in the lonesome solitude of his home. “Everything was done at home, there’s not really much studio involvement,” he explains. He sent the songs longtime collaborator and producer John Collins who did his magic and that was literally it as he explains it to me.

“I wanted to do the skeletons of the songs by myself on my computer. I also wanted to sing the songs in a fresh way so what you are hearing on the album is mostly the first or second time I actually sing these songs. It wasn’t something I intended to do, I originally aimed to revisit the vocals later as they are really poorly recorded in my kitchen and living room. “

Despite its raw recording attempt, Have We Met sounds like the next logical attempt to take Den Bejar’s cinematic soft pop extravaganza to new heights. Adding Destroyer guitarist Nicolas Bragg to the equation halfway into the recording process also played a part here. “Originally I didn’t intend to have guitar on this album but I thought there was musically too little for John to play with so I asked Nic to come on board,” Bejar says, being well aware of the fact that Bragg adds its own distinctive vibe to the Destroyer DNA.

The sound of disconnection

For me, Kaputt is the greatest album of the past ten years, a masterpiece I get back to on a regular basis because there’s so much to discover on it. It’s complex, musically and lyrically, but on the other hand easily accessible, using smooth instrumentation and a musical approach that’s far more melodic than it is experimental. It was a game-changing record for Dan Bejar and to this day I still struggle to fully get behind his work prior to Kaputt. Maybe because the songwriter was still looking for a fitting formula for his creative contradiction. “A certain disconnect between the nature of the music and the nature of the lyrics has always been there,” he explains to me and for a long time he’s been separating them but that changed around the time of Kaputt. Crimson Tide, the magnificent opening song of Have We Met, however is a return to this older attempt, as Bejar explains to me: “‘Crimson Tide’ came from old writings I did, originally planned for a non musical project.” While the lyrics seem to be cryptic and chaotic he performs them on a straight beat and a gentle piano melody, making it a quite wholesome listening experience, despite its odd nature. That’s was Destroyer‘s music is always good at – it tricks you into believing it’s easy-going dream pop without falling for lyrical shallowness.

Dan Bejar – who’s more inspired by traditional songwriters like Joni Mitchell and Leonard Cohen – likes to observe pop music from a distance, as an outsider, not like an actual part of the scene. There’s also a fascinating origin story for Have He Met as the original musical concept circled around pop music from the late 90s, especially the one around the end and beginning of the millennium. Anyone remember Y2K? Dan Bejar does. Or at least he thought so. “I don’t know why I did that,” he says. “I thought about loud drums, loud bass and loud vocals and songs that only involved that. And I remembered how I walked around in bars and public spaces twenty years ago and that was the sound of it… which I totally despised obviously.” He laughs and we both think about how the pop of this area actually sounded like? William Orbit’s production on Madonna‘s 1998 album Ray Of Light and for All Saints come to my mind. And of course the ‘dirty pop’ area of Britney Spears, Christina Aguilera or N Sync, crafted by Swedish hit machine Max Martin. “We thought about a ‘light industrial sound’ but clearly had no idea how that would sound like,” Dan Bejar explains his attempt, naming the soundtrack to The Crow one inspiration. He was wondering whether he could explore this sound with a certain distance after originally really hating it so that’s an almost scientific approach towards a pop record, if you ask me. 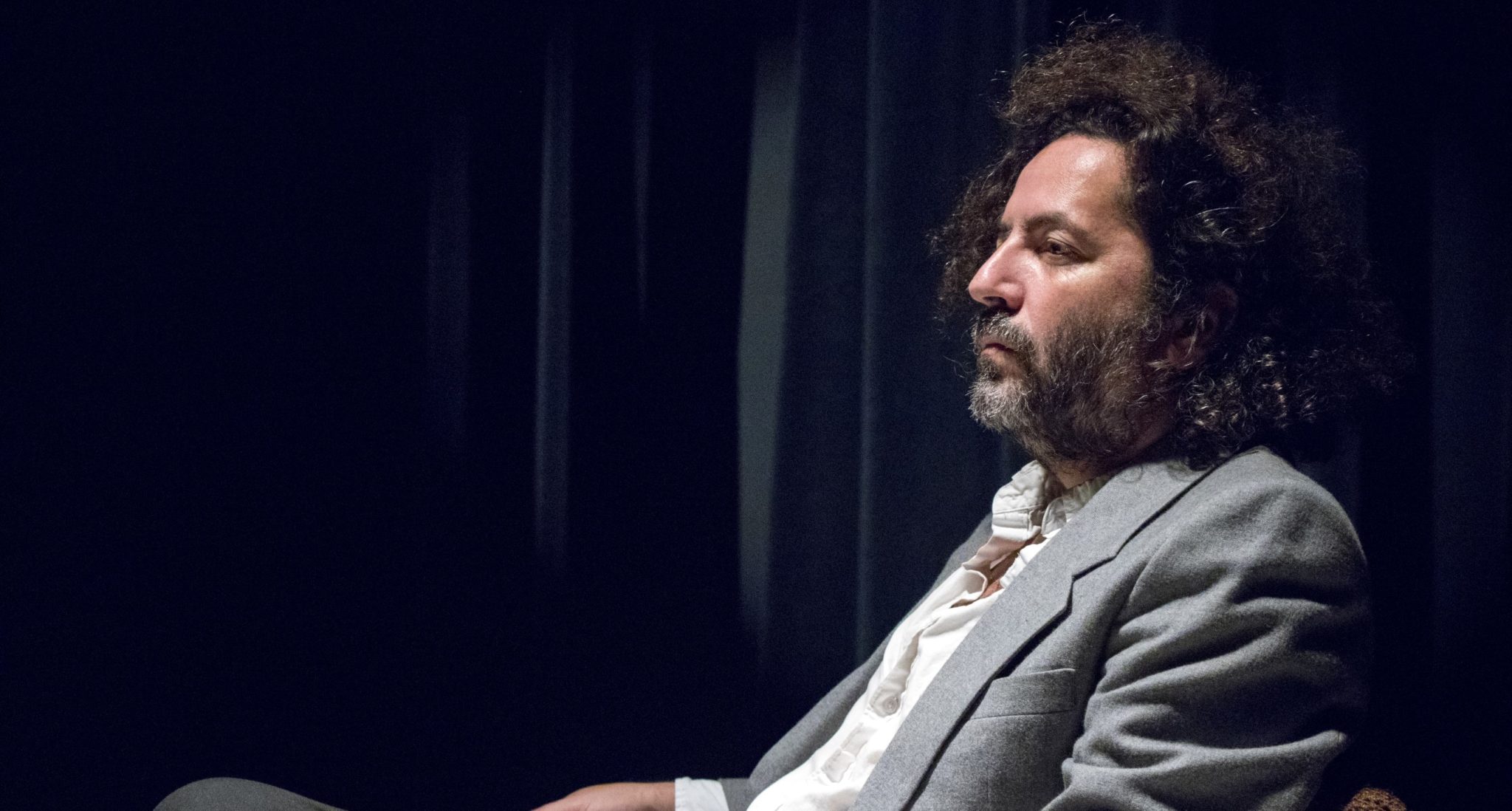 During the recording process Bejar and John Collins ditched the idea and moved away from it but if you listen more carefully to the new Destroyer album you might accidentally spot a few nostalgic sounds and moments in there. “My music is often about fighting a battle you can’t win but that you are going to fight anyway,” the mastermind explains the record’s notion before asking “That’s quite a hopeful stance, isn’t it?” Personally I think it’s this battle that really fascinates me about his approach towards music as well. We live in an age where pop music is mainly designed to please the masses, to do no harm and ‘make you feel good’ – whatever the heck that means anyway. But here comes this guy in his forties, lamenting about the world and its despise for it in the most beautiful and melodic way. It’s an insane mixture that feels absolutely right and on point. It’s an uncomfortable way of comforting the listener and it wouldn’t work if the struggle behind the songs wasn’t real as Bejar confirms:

“I have to feel optimistic in some form although I also feel more isolated than ever. I feel apart from the world but maybe that’s a normal thing to happen once you get older. That separation can lead to a specific form of writing which is dark and hopeful at the same time.”

Again, don’t let the record fool you. Have We Met also deals with human abysses but it also feels like the most uplifting album Destroyer ever released. He might be a misanthrope but the Canadian surely knows that he can’t play this role forever. “It’s impossible to not get engaged with this world. It will find you and it will affect you whether you like it or not.” So, he’s not specifically looking for his place in the world of pop but he can’t ignore it anyway. He hasn’t listened to Old Town Road yet but he also remembers listening to one Ariana Grande song recently and actually liking it. Still, he’s struggling to confess that in the first place for obvious reasons but we both agree that there’s greater freedom in the people’s relationship towards the world ‘pop’ these days than it used to be a few years ago. “The term ‘guilty pleasure’ has officially disappeared for younger generations,” Dan says. “They haven’t been raised by such strict divides like we have. Part of me thinks it’s good that it’s gone while another part is quite nostalgic and misses the whole gang mentality.” He can’t hide a certain sentimentality in his words and I’m not blaming him. He’s one of a kind, fallen out of time with a unique, honest and quite old-fashioned approach towards music. He wants to combine musical and lyrical quality, bringing intelligence back into the pop cosmos. It’s a battle he might be losing anyway but like he said before that’s the scenario he usually feels most comfortable at. Dan Bejar might be one of modern music’s most mistaken geniuses, a pop crooner by accident and a wanderer between worlds. And I think it’s never too late to join him on this journey.

Have We Met will be released on January 31 via Merge Records.