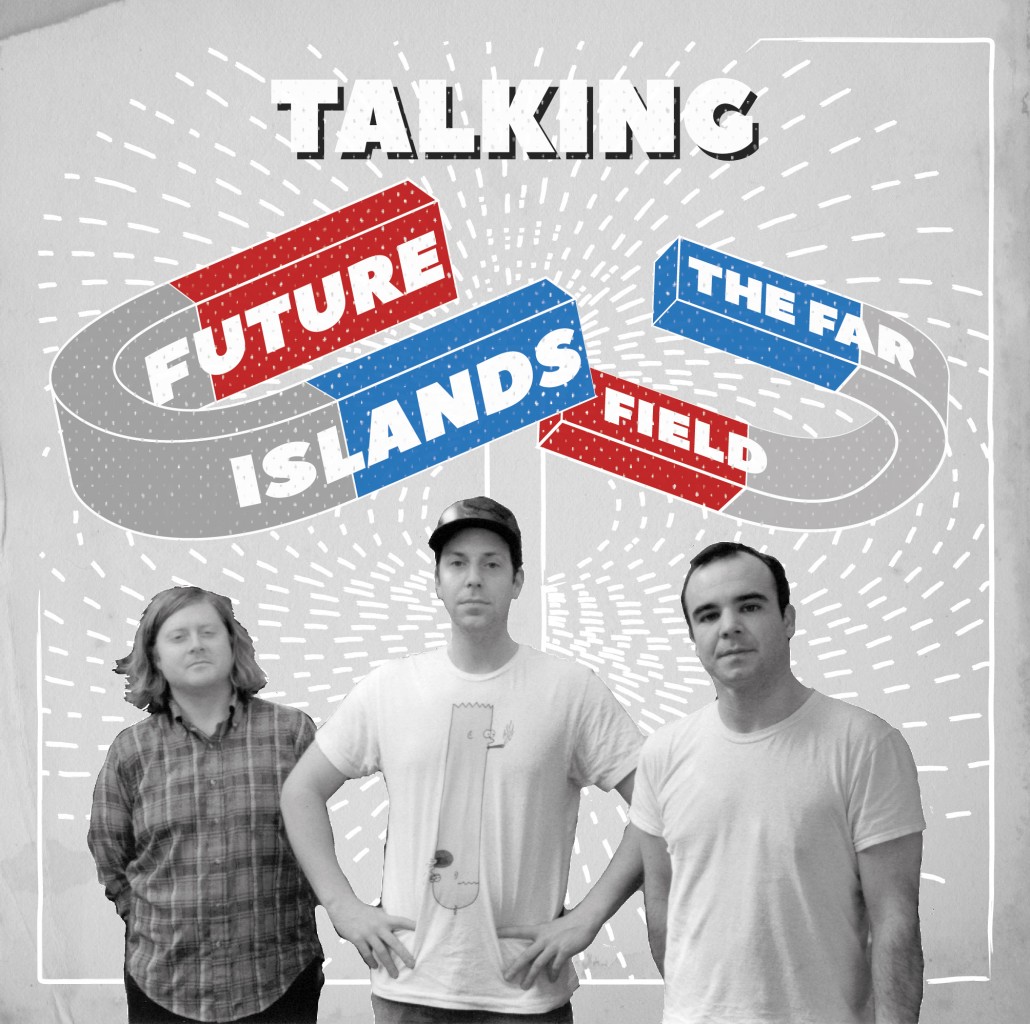 For a long time FUTURE ISLANDS were kind of an insider tip for fans of punk rock driven synthie pop sounds with that lovely little lo-fi touch. Either it were these cheesy Game Boy-like melodies with rough and bumpy drum machine beats or that vocalist singing and slinging himself up and down like a caged animal between suffering and madness, once you saw this band, you were infected with the virus that let you visit every show they’ve played near you. And speaking of live shows, the band sure can be seen as one of the hardest working groups in business. Playing more than a 1000 shows in the last 10 years, most of them in small and dirty underground clubs or on festival stages, the band knows what it means to live on the road.

In 2014 the bomb dropped in form of their network television debut at David Letterman’s Late Show. Equipped with their freshly pressed 5th long player Singles the band brought a legendary performance that even surprised Letterman. Not least because of Samual T. Herrings intense but incredibly powerful performance combined with great gestures and awesome dance moves that established him as one of the greatest frontmen in music history that night.

From this moment everybody, even your mom, was interested in the Baltimore-based band, that had done nothing else than they’ve always done, simply writing powerful pop songs and performing them with everything they have. With Singles and its unexpected success the band found itself in the happy position to please their loyal fan base and acquiring a new one with every further show they played. And even even if it sounds like a version of that silly old ’never forget where u came from’ game, talking with the band these days still makes clear that they never took all that for granted. In the wake of the anticipated follow-up The Far Field, NOTHING BUT HOPE AND PASSION once again had the chance to sat down with FUTURE ISLANDS to talk about their work, the fame, the future and dealing with artist’s creativity.

With your new album you brought again some new vibes to the typical FUTURE ISLANDS sound. What has changed for you, what worked otherwise this time?

Willam Cashion: Basically we tried to kept working and writing the way we always have for years. Well, there was more pressure on that record than we ever had before but we tried to ignore that and keep our heads down and keep working. I’m sure that the songwriting in some way was our reaction to Singles the whole 22 months tour, that went along with the album. It was something that we talked about when we were writing, we just kind of jumped in, just like a subconscious communication between the three of us.

Do you even had some free time between releasing and playing the Singles album and recording the new record?

WC: We took about a month of and we took breaks in between writing sessions, I mean I started and watched all Game Of Thrones, I got caught up by this in the last year. (laughs)

But we definitely were busy with side projects’ albums, did some shows with these albums and mostly the last year was just writing and some practice days in Gerrit’s house or my place.

You’re still playing with your drummer Michael Lowry, you had on your last tour. Has your recording process changed through this?

GW: Yes we still have a drummer on this record and definitely wanted to have the drums present. When tracking it we and Mike played together, or at least all the bass and the drums were recorded together as opposed to laying everything down on the previous record and then adding drums afterwards. 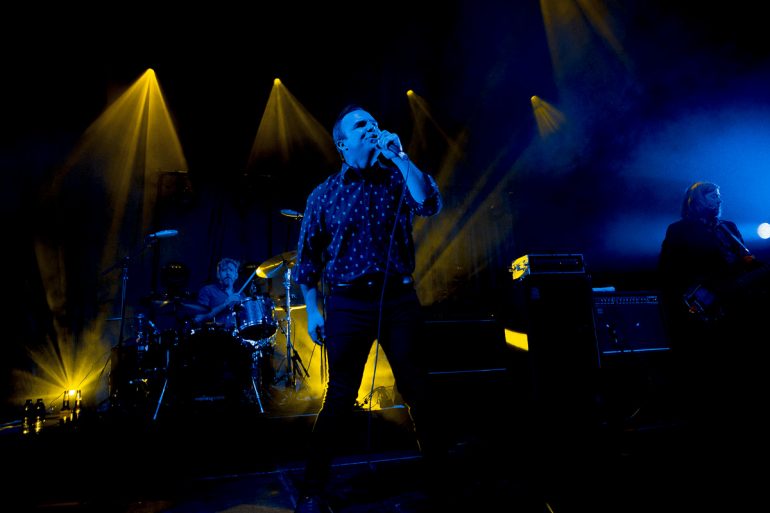 Having a look on the new album’s sound there’s also a whole new touch on the vocal parts that can be discovered. Approached on this Samuel T. Herring, the charismatic singer whose performance often ranges between MORRISSEY and Henry Rollins, describes the barriers and succeedings in this process full of joy.

Samual T. Herring: ‘I think there’s always a reaction from album to album. We first recognized that, when we wrote our third album On The Water. They way our second one was kind of upbeat and rough and full of our frustration and raw emotion. Part of that was because we were still young and we were going through a lot of changes in our day to day lives. But then we really slowed things down. Not purposely but at this time we’ve been on the road for like 300 shows in two years.

Then Singles became the reaction to On The Water, where we thought that we’ve lost some of the intricacies and wanted to make an album where each song is very defined and the statements are very clear. For The Far Field the only real thing that stuck in my mind was reacting again to the sound of our last record bring back some more of the emotional vibes and feelings that were part of our earlier albums and that was maybe the one thing that was lost in Singles because it was so high fidelity and polished and clear. Just for my heart, I wanted to bring some of these feeling back when we were kids and didn’t really know what we were doing.’

No matter how different the albums sound, that special feeling is still sensible during the furious live experience FUTURE ISLANDS are offering. Earlier this week, Herring and his gang played what turned out to be their biggest headlining gig so far, in front of an excited Berlin crowd of a little more than 3.000 people. Herring’s voice is the distinctive anchor during these two hours, showing an impressive range from tender whispering to frantic screaming and wild grunting. It’s a truly unique but also exhausting performance and it’s nothing the singer takes for granted

Samual T. Herring: ‘With every record I have to learn to sing again because the road does take such a toll on my voice. And going into writing I was really concerned with where my voice was. This always scares me and then it becomes an exciting thing to have to learn new ways to sing. I had to learn how to sing when we wrote An Evening Air where I developed a whole new voice with the growls. This is where it emerged from, from our early days when we were playing small shows without monitors and rooms with tons of feedback. With The Far Field I tried out on certain songs a couple of new things and ways I never sang before. This is all kind of exciting as artist to develop a sound and finding new ways. And this is definitely the first time that I ever put down layers of vocals like done my own back up harmonies. These things are personally really touching to me and one of the reasons why I’m so excited to share that record.’

‘We are still doing exactly what we’ve always done, writing the way we’ve always written and also found some real beauty in that.’ 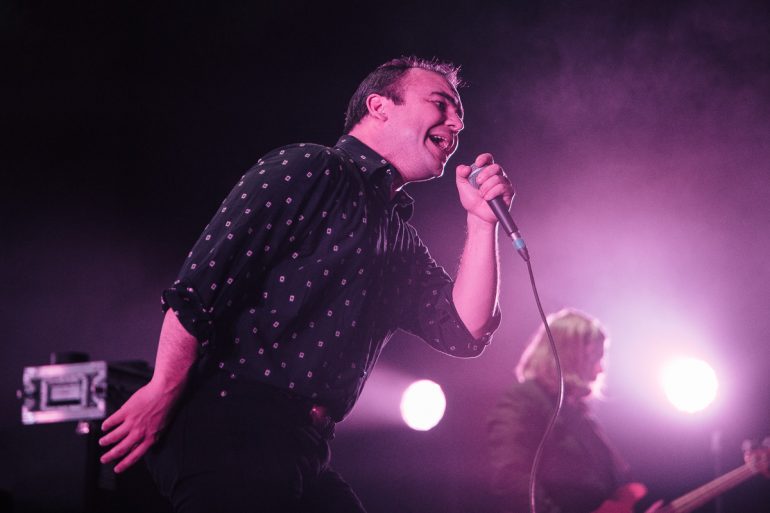 Having a look on your discography shows how cleverly it’s connected in sound and expression. But with the high fidelity sound of Singles and it’s massive success, would you agree that it marked the point to a pre- and a post-Singles era?

SH: ‘Well, everything is a continuation for us, we didn’t go into this record saying let’s be experimental and make a ten minute drum song or something, we stayed very close to who we are as a band. And when this record was completed and we were trying to find an album title, it was like‚ man it’s too bad we named the last album Singles otherwise we could have named this album that way, and that’s the way how we’ve always written. The title Singles was kind of an inside joke because we always thought we don’t write B-Sides we only write singles. We don’t really write songs that we don’t think deserve peoples attention.

‘Putting out this record was difficult because we wrote 22 songs, recorded 15 and the we had to cut it down to 12, what was like choosing between you children. I think it was more trying to recapture a sound quality rather than thronging away from the last album’s sound. It was about how can we take all of lessons we learned cause with every album you learn a little something. With Singles we’ve found a whole new world of possibilities and all these things really did work but we wanted find out how to gain the things that were missing. So it was finding the middle ground between the things that worked and things we can improve. We are always excited to write new songs because it’s like a chronicle of life, day to day and year to year, finding out and reflecting on who we are and where we are as people.

‘I’m just excited to write the next record right now but we have to go out on the road for a couple of years.’ (laughs)

The album isn’t out yet but there are already like 50 shows scheduled for this year. Will you be touring as much as the last years?

SH: ‘There’s still some stuff that’s booked but not announced yet. We’re already looking into 2018. And that’s really exciting to us. We love to connect live with people and are excited to see these new songs grow more and more out at the road. We are still learning how the songs feel live. Playing them will not be a problem at all but we know they’re getting better the more times we do play them. And we find even more of the emotional qualities of the songs together with the audience.

We always said our songs aren’t done until we’ve played them fifty or a hundred times in front of people. That’s when you really find out the strength of a song. To us that’s the most natural, we’ve always been more a live band than a studio band. Playing live is where we feel the most comfortable and we get the most gratification instantly and feel like we are making a difference. We are excited to get out on the road!’

The Far Field will be released on April 7 via 4AD. Find forthcoming tour dates below.