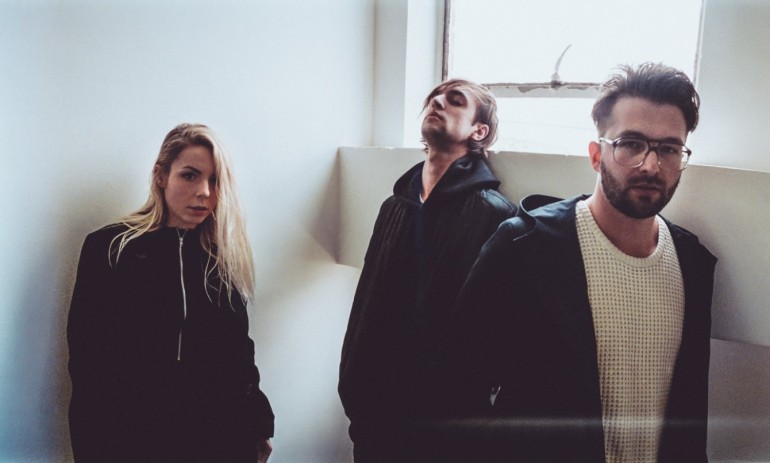 London-based trio HÆLOS is one of the most interesting new acts we stumbled upon in the past months. The British three-piece and their latest EP Earth Not Above deliver something you could describe best as a ’21st century update of trip-hop-infected pop á la PORTISHEAD‘. Their music is hypnotic and intense but also quite melancholic and introspective at the same time. Whatever you’d like to call it but it’s hard to resist and we’re definitely looking forward to more material from the HÆLOS microcosm in the near future. In the meantime get to know them a bit better in the form of our infamous ‘Introducing Q&A’ right here.

How would you describe your music to our readers in one sentence?
Dark euphoria.

Describe your earliest musical memory
Five years old, singing along to Carol King’s Tapestry on a road trip through Spain with my mum.

If your music would score a movie what sort of movie would that be? What actors can you imagine playing in it?
Anything by Terence Malick – maybe staring Di’Caprio, maybe starring McConaughey, maybe both would be good..

If this whole musician thing won’t workout – what would be your alternative dream job?
When I was a kid I wanted to be a Dancer.

Tell us a mostly unknown artist we should definitely check out.
Anything by PHORIA.

The music industry is changing quite heavily these days. What’s the best and what’s the worst part of these changes, in your eyes?
It’s an interesting time for young artists – The Internet has given us a voice and platform we didn’t previously have access to. The whole process of releasing music is much more democratic and I think we’re seeing the benefits of that. Also, I suppose the world has become a much smaller place, you can put a track online in London and it could be playing on the radio in LA a few hours later. On the flip side, the internet has made music much more disposable. Everything is consumed much faster and that can make people fickle and shorten attention spans.

Unleash your inner Burt Bacharach and complete the following sentence… ‘What the world needs now is…’
Burt nailed it the first time. ‘Love.. Sweet Love’