Please note: This article was first published in May 2016 and was later slightly updated in May 2021, marking the records 20th anniversary.

Sometimes it just takes a few more attempts. In 2008 Elbow finally won the acclaimed Mercury Prize with their fourth album The Seldom Seen Kid which marked the most important step in their career so far. It happened seven years after their debut Asleep In The Back lost against PJ Harvey‘s Stories from the City, Stories from the Sea. Who who’d have guessed that back then? But Guy Garvey and his gang remained stubborn and persevering, even if it the odds were against them for a while. Risen out of the late 90s Britpop ashes Elbow weren’t as tough as Oasis or provided gentle radio-friendly melodies in the style of Travis and Coldplay who released their debut albums around the same time like the one from the Mancunian five-piece. They have always been a bit odd, a bit less posh and more quirky than their colleagues. Beauty was always sensible in their music but sometimes you just have to dig a bit through the dirt to get to it, especially on their earlier releases.

Asleep In The Back, released on May 7, 2001, is packed with a lot of beauty but also a tragic history as it took the band ages to get it released, resulting in a tough era for the young gentlemen although  it was also an exciting time as singer Guy Garvey remembers that period when we sat down with him to discuss his solo debut Courting The Squall. Speaking of the Elbow debut he confesses: ‘I remember the heart-break of not getting the first version out and it took us one year and a half to finally release i.’ They were dropped by Island Records before they were able to release the LP. A few years later they actually signed to the same label. ‘Quite ironic, right,’ states Garvey with a big smile. ‘We weren’t allowed to have the recordings back then which forced us to record all the songs again,’ he explains. Most of the leftovers from the first session ended up as B-Sides later but the Elbow singer says that there still is an inferior version of the LP around somewhere.

A soundtrack for the ‘Millennium Hangover’

Produced by Ben Hillier the LP mixes beauty and dodgy elements. Ballads like Red, Powder Blue and the epic Newborn already got a lot from the graceful tenderness of today’s Elbow, delivering string-drenched anthems carried by Garvey’s distinctive vocals. But on the other side there are this bluesy and weirder moments like the jazz-infected opener Any Day Now, the beautiful sleaziness of Little Beast or the edgy Bitten By The Tailfly which surprises with a noisy guitar riff straight from the dessert, it seems. No, Elbow weren’t interested in the sound of a usual rock band. They share this attitude with Radiohead or their Manchester-based friends Doves (about whose debut album we talked back in 2015 as well) as Garvey explains:

‘Just like Doves we came from a sample culture. They were big with those whole dance/ Hacienda scene while we preferred the Bristol-sound of Trip-Hop bands like Massive Attack and Tricky; the stuff that came out of the back of acid jazz. Those clear and partly stoned grooves inspired songs like Any Day Now on the LP. DJ Shadow’s early stuff was also very inspirational for us.’ 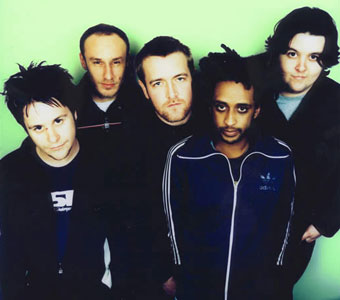 Remembering the recording sessions of Asleep In The Back he talks about ‘a very definite moment in time’ as the goal was to write ‘many of the tunes on the album to sound like samples.’

The Elbow debut presents gentle intimacy with the difference that it might take place in a shady bar instead of a cosy bedroom between two lovers. The atmosphere of departure around the end of the 20th century wasn’t something Guy Garvey and his band wanted to join in.

‘The record was specifically written as an album for the millennium hangover,’ he explains during the interview. ‘I predicted that people would be disappointed in general about the first years of the new century.’ One of the key tracks about this feeling didn’t even end up on the final LP.

‘There was a song called About Time which later ended up on a B-Side. The LP was originally supposed to be released in late 1999; just before the millennium and that song was looking forward to the 21st century. So, it didn’t make much sense to have it on the album when we finally put it our in 2001.’

Asleep In The Back celebrates a delicate depression but one that also holds a lot of hopeful spark inside itself. It is, indeed a ‘hangover album’ and especially a lot of the B-Sides released around this time like Vum Garda, Lucky With Disease, Wurzel or the already mentioned About Time spread this vibe. ‘I still love Asleep In The Back very much and it’s a truly beautiful album,’ says Garvey as Elbow  included a few of those old beauties back into their live set. After almost one decade off-time, Newborn made a comeback, same goes for Any Day Now.

‘As you got to play bigger and bigger rooms, especially after the success of the The Seldom Seen Kind in 2008 you tend to play the tracks that most of the people know instead of just pleasing the fans of the old ones. Still, every now and then we perform a few of the older songs.’

The past is still a crucial element in the understanding of Elbow who are currently working on a new album for a 2017 release and following the departure of founding member and drummer Richard Jupp earlier this year. Asleep In The Back is a hidden little diamond of British guitar music history. It might not shine as bright as Parachutes, is not as danceable as Franz Ferdinand or packed with hits like Morning Glory but the mood it presents is as timeless and beautiful as it was 15 years ago. And even if it might take newer generations a bit more time to appreciate it, it will be worth it. You will need a few attempts, but Guy Garvey and Elbow can tell you a thing or two about that sort of pace, believe us.

For its 20th anniversary Asleep In The Back has just been reissued digitally with lots of bonus tracks, including some of the alternative versions and B-Sides Guy Garvey talked about.