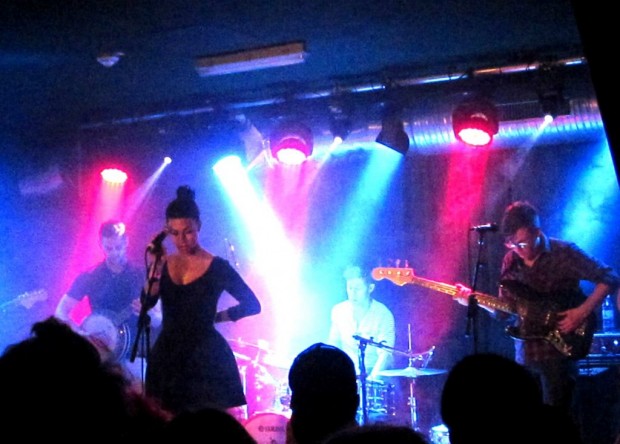 PHOX, live on stage last night at the Privatclub in Berlin

Showcase festivals can be a tricky and quite stressful thing. Especially when they are organized in a big city like Berlin. And although the annual ‘First We Take Berlin‘ festival (It’s the second time, so we can officially use the term ‘annual’ right here) is entirely placed in the borderland between districts Friedrichshain and Kreuzberg it’s still a lot of running (or cycling) around between different venues, trying to catch 10 minutes of that act or 25 of the other. It’s a certain rush but this might also mark the special atmosphere of such an event. There’s music and people everywhere on the streets of Berlin. Still, nothing THAT unfamiliar for the ever-buzzing German capital.

In order to avoid all the stress it sometimes is a good idea to basically just stay at one place for the whole evening. Last night we choose the Privatclub in Berlin. Of course, one reason might have been the fact that NOTHING BUT HOPE AND PASSION hosted the stage together with agency ATC. A second argument is the coziness of the club. And when we say ‘coziness’ we mean it’s tiny, hot and sweaty, creating an unavoidable intimacy between audience and artist. And the best argument were the bands of that night. Six talented acts you should definitely have on your radar. No, we’re not bragging here, they are all worth to be discovered. So, enjoy us for an honest recap of that sweaty and hot Thursday evening in Berlin.

It’s hard not to fall in love with 17-year-old Bridie Monds-Watson aka SOAK. Standing on the stage all alone, hidden behind an acoustic guitar and a long fringe, she enchanted the people with her velvet voice. The singer from Derry, Northern Ireland, has already released three EP’s and was recently signed to CHVRCHES‘ label Goodbye Records which released her latest work Blud. One almost hopes that her career doesn’t pick up speed too far, so that she stays as pure and uncut as she is.

With SIVU we had another artist from the singer-songwriter-faction. The twenty-something from Cambridge gave a sample of his debut album Something On High which will be released soon. SIVU‘s voice ranges from quirky falsetto to soft tones full of intensity. Even if there weren’t too many people at this point, he entertained the audience with emotional lyrics and his boy-you-would-like-to-drink-a-beer-with-charm. Would be great if he would let this roguishness flow into his music from time to time and add some less thoughtful and more fast-paced songs to his repertoire.

Oh Monica Marin, you wonderful angel. Pardon the lover’s oath but that woman truly is something special. The lead singer of Wisconsin-based six-piece PHOX is blessed with a terrific voice, great natural stage presence, a lovely smile and fellow musicians who really understand to place her voice in the right musical environment. The band’s just released self-titled debut album is packed with a smooth mixture of soul, r&b, pop and folk. And this combination truly worked in the cozy atmosphere of the Privatclub. Especially when Marin found the bravery (she was a bit excited) to sing Calico Man acappella. A wonderful magical moment.

CATFISH AND THE BOTTLEMEN

If you belong to the group of ‘wise’ people who claim that indie-rock-bands from the UK are an endangered species, think again. Or tell it to the face of Van McCann, frontman of Welsh band  CATFISH AND THE BOTTLEMEN. He might face you with a playful smile before picking up his guitar and rock your socks off. That’s basically what him and his buddies did last night in Berlin. Cool haircuts, tight leather jackets and even cooler tunes. Great Britain and melody-loving indie-rock – it’s an eternal relationship. Yes, dear grumblers; it’s far from being innovative. But sometimes music just needs to be raw and honest like in the case of these four British gentlemen.

Three-piece BLAENAVON call their music ‘ghostjazz.’ The lanky boys from Hampshire are far from spooky but listening to their spacious electric guitars and the impro-finals of their songs, this is a legitimate description. But before they got lost in their melodic soundscapes, the drums kicked in and singer Ben Gregory proved that he is not afraid to overexert himself behind the mic stand. There were some extra sympathy points for his efforts to speak German.

While the oxygen content in Privatclub reached rock bottom, the last band of the evening entered the stage: WE WERE EVERGREEN. Their songs might not be evergreen’s but there definitely were some catchy tunes among the lively indie/electro pop of the Parisian trio. Especially their harmonizing singing and the playful xylophone of multi-instrumentalist Fabienne Débarre gave their songs the sunniness that makes their debut album Towards a dance favourite for every indie disco.