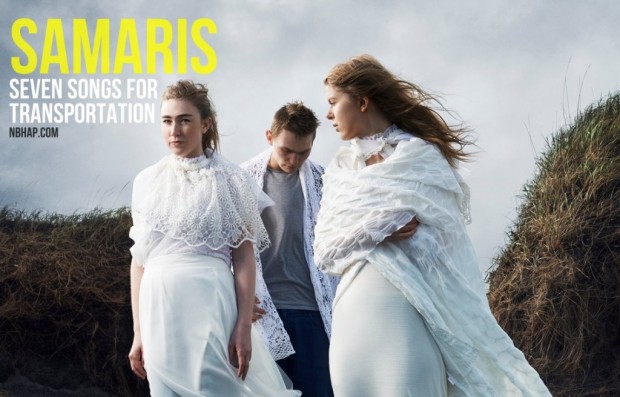 Believe it or not – a lot of time in the life of a rockstar is not spent on making out with groupies or drinking expensive champagne. Travelling is an important aspect as well. May it be vans, busses, planes or just public transport. While we’re pretty sure that Icelandic electropop band SAMARIS are not directly fans of groupies and hotel room destruction we figured out that travelling might mean a lot for them two. Only last year the trio released it’s shiny selft-titled debut album. Now, the follow-up Silkidrangar is about to get released on May the 9th. Once again, eclectic electronica teams up with the gentle voice of singer Jófríður Ákadóttir to create something almost mystical. After all, we’re talking about Iceland here, the place where even pop music sounds like a fairy tale sometimes. The musician on her song choice for NOTHING BUT HOPE AND PASSION:

I have been traveling now for about 3 weeks, playing, doing interviews, visiting friends and sitting in the sun. I was inspired to put together my seven favorite songs to listen to whilst going between those places, in dark busses on the way to the airport, in overly bright London underground services or just walking in a nice city.’

Find SAMARIS‘ seven songs for transportation right here on the following pages. An interesting mixture of well-known artists and music you should definitely discover.