This year’s Maifeld Derby Festival once again didn’t disappoint their fans with one stunning performance chasing the other on the three sunny days of the festival. Located at a horse race track the festival is all about the horse: One stage is inside a horse training field and the stables provide for the backstage area with each artist in their own box. We took the chance to have a chat with some of our favorite artists in the line-up. And since you already enjoyed our first selection of horsepowered interviews you will probably join us for the follow-up, right? In our second part Hinds, All Them Witches and ÄTNA answered six not too serious question about horses. 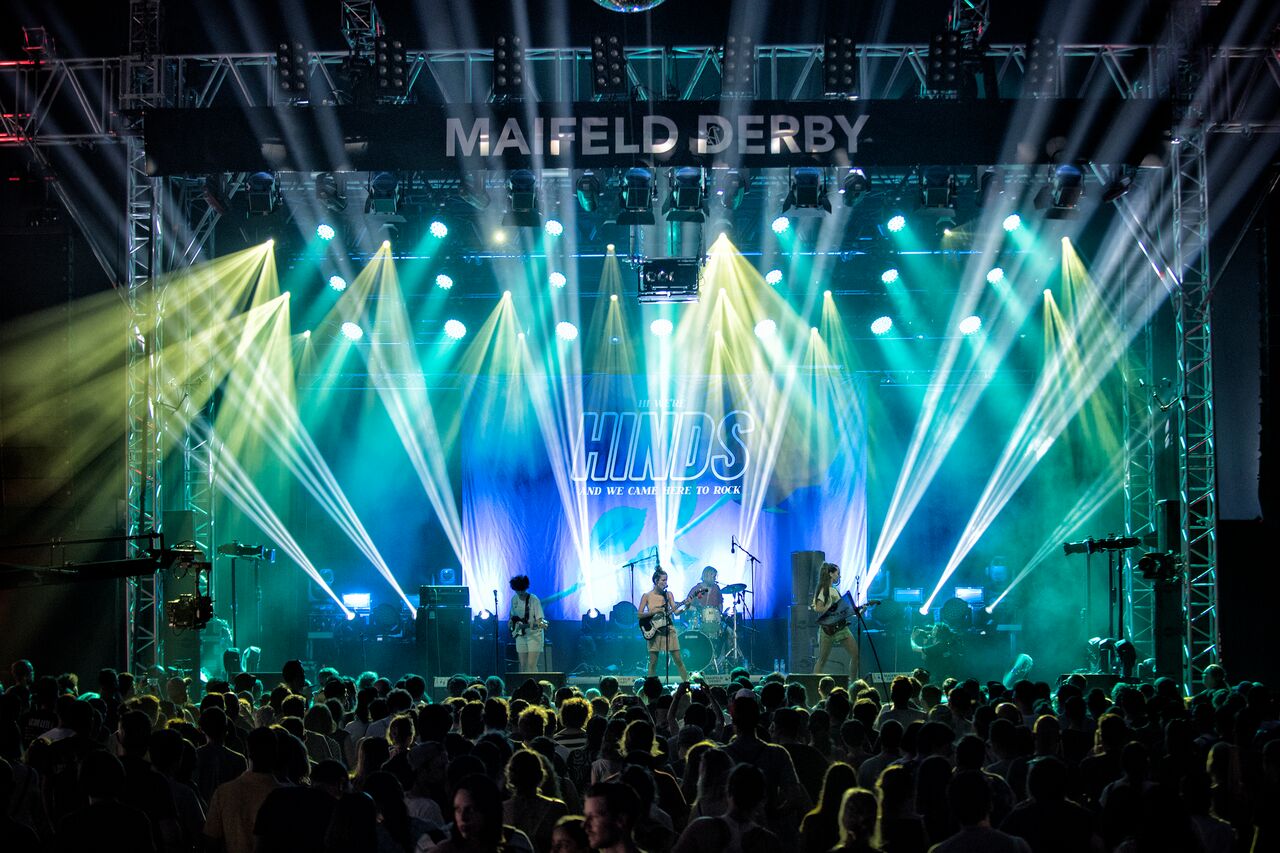 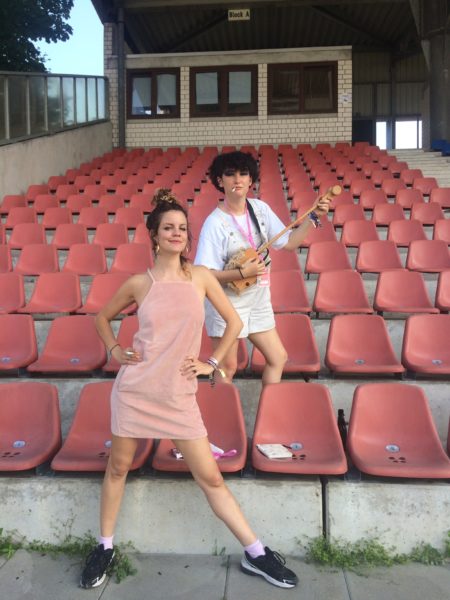 Ade kows how to play the horse guitar

Carlotta: I used to ride horses when I was little but I haven’t done it since I was like 15 years old. My mom had a boyfriend that really loved going to the mountains with horses and during that period I went riding horses a lot.
Ade: I only did it when I was in school. Like an excursion with the whole class and you go to a farm. I really liked it but I wouldn’t say I’m a professional horse rider.
Carlotta: Are you sure?
Ade: Pretty sure.

Ade: I would take the harmonica  ‘cause it fits the situation.
Carlotta: I would go with a small guitar, a Spanish guitar.

Ade: Lightning something… Super lightning.
Carlotta: I would call mine Caballito. Which is like horse in Spanish. But a little horse.

Carlotta: We have a band called Horsey. And we toured with them in the UK and they are awesome. Kind of weird music but it’s worth it.

Carlotta: I would be a nice horse I would let anybody. Anybody that I can handle. Horses are so loyal that they wouldn’t complain, they would die before stop running. And I don’t wanna die if I’m carrying a very heavy person.
Ade: ehm…
Carlotta: Your parents?
Ade: Yeah, my parents. I would take them on a ride.

Robby: I don’t really know horse breeds.
Jonathan: I’m going Mustang. Wild Mustang. They just run wild across the western US. It’s a real Cowboy horse.
Ben: I go with whatever horse Black Beauty was.
Jonathan: It’s a Stallion.
Ben: Okay, I wanna be a Stallion. Because he was a good looking horse and he was fast.
Robby: I’ll pass.

Jonathan: Have you ever been horse riding?
Robby: Yeah I was when I was in sixth grade for like 30 minutes.
Jonathan: The last time I rode a horse I was like 14 years old maybe.
Ben: I’ve ridden a horse twice. And it was very scary. I was like 8 years old and it was a massive horse. Its name was Bug.

Ben: I would bring a classical guitar.
Robby: Me too.
Jonathan: I’d bring a squeeze box.

Jonathan: I think I would name my horse Shalom.
Ben: I’d have to go with papier-mâché.
Robby: I’ll say Primus.

Ben: Wild Horses by The Rolling Stones.
Robby&Jonathan: Yeah, that’s a good one.

Demian: Newfoundlander. Aren’t those the horses with the long hair on the sides and on the legs also?
Inéz: Yeah, I think these are the Newfoundlander.
Demian: They have a lot of character I think and their style is very unique.
Inéz: Aren’t there also dogs with the same name?
Demian: Okay maybe Newfoundlander are dogs?
Inéz: I will look it up. But I know which horses you mean; they have curls and they are beautifully black. I think it’s Friesen as the dog here is a Newfoundlander (she’s showing a picture on her phone).

Demian: You want me to answer this first?
(Both laughing)
Inéz: Yes please.
Demian: I have ridden a horse one time for a day trip and it was a lot of fun. Even though it was very scary because these animals are so big. I mean when they are slow it’s all good but once they start taking off and running faster I get a bit nervous. So my connection is very respectful. Inéz though used to go …
Inéz: …riding horses, yes when I was young. I did horse vaulting and free riding. And I really loved it. Later I found out that my Chinese horoscope is a horse. So I got a big brain.
Demian: Are horse brains big?
Inéz: Yeah.
Demian: ‘Cause they have it in the front?
Inéz: No, but they have a big head. 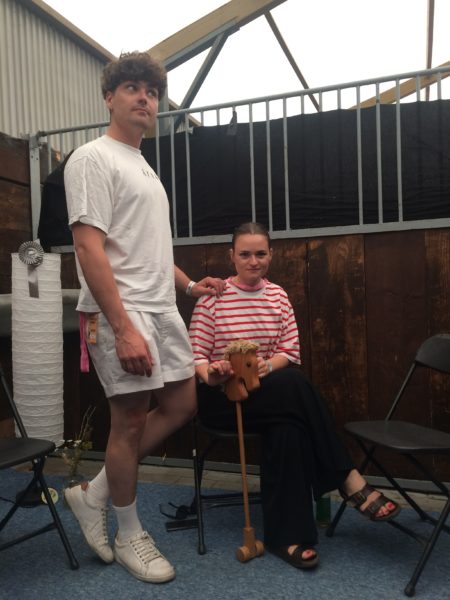 What is Demian looking at?

Demian: For me it would be a Ukulele. Because you don’t even have to know how to play it and it already sounds good. You only have to move your finger and everybody thinks you’re a wonderful guitar player. It’s also very small and you can carry it easily. And for you?
Inéz: I would take a children instrument. The one with the distortion on it.
Demian: Something that records you?
Inéz: Yeah. And then I just play bebadengdengdeng.
Demian: So like a small sample box.
Inéz: Yes, a small sample box with children sounds.

Demian: I’m thinking of Mr. Ed jumps the gun. I think Mr. Ed is a horse from a TV series that used to be on in the 70s or 60s. They have the name of a horse as their name.
Inéz: I have Bibi Blocksberg. There is the song ‘Bibi und Tina auf Amadeus und Sabrina’. Yeah that’s my favourite song. I loved Bibi Blocksberg when I was a child.

Demian: I would choose my duo partner because then we can still make music. And I would take her first to the Maifeld Derby, because it’s very horse friendly so I have a cool backstage where I can hang out with her. And we don’t have to separate because humans and animals could be in the same spot. And after Maifeld Derby I would probably ride to the south, maybe Spain.
Inéz: That’s okay for me. (both laughing) 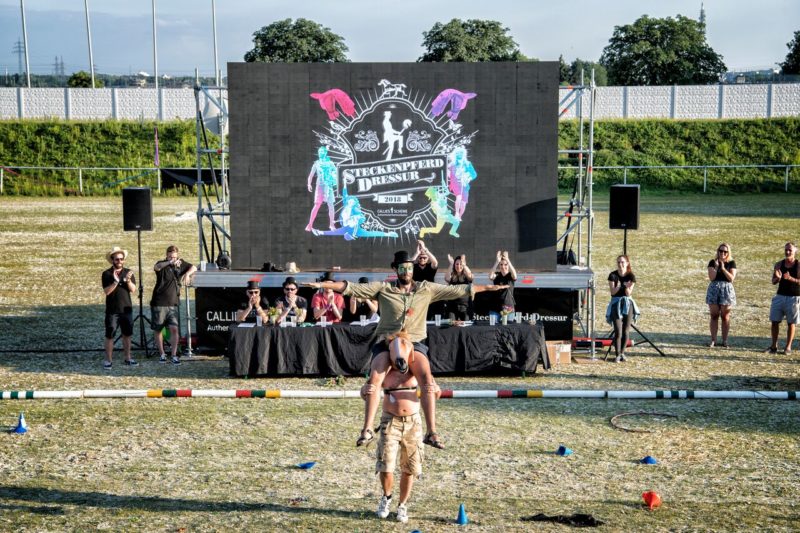