Interview: Mogwai – ‘People expect it to have some attachment’ 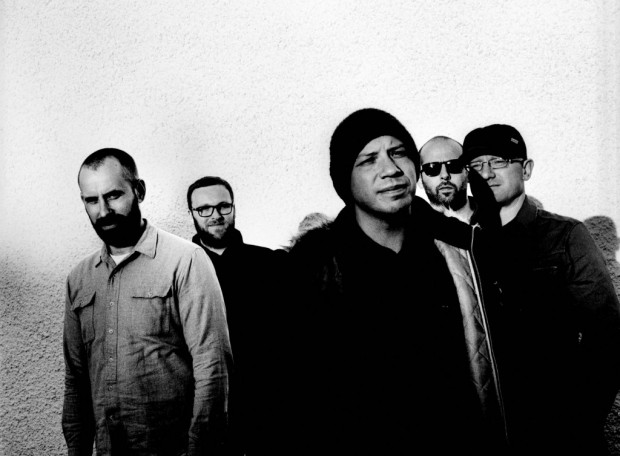 Post-rock slow burners MOGWAI have been around since 1996.  Made up of Stuart Braithwaite (guitar, vocals), John Cummings (guitar, vocals), Barry Burns (guitar, piano, synthesizer, vocals), Dominic Aitchison (bass guitar), and Martin Bulloch (drums), the band is touring to support their 8th studio album Rave Tapes, recorded at their own Castle of Doom studios in Scotland.

NOTHING BUT HOPE AND PASSION was lucky enough to sit down with guitarist John Cummings.  We are at Berlin’s Tempodrom, a 3,800 person circus-tent-looking building that the band is going to play later that evening. It’s a big space, and MOGWAI is playing here for the first time. I noticed John has two small wounds over his left eye, and he begins the interview by apologizing. Read on to find out the source of the wounds, the name of the MOGWAI song titles, and how this band has stayed together for almost twenty years.

So this is the biggest venue in Berlin you’ve played. But MOGWAI has a special tie to Berlin because Barry lives here. Do you come here often?
I live in Glasgow, I don’t come too much. Barry is here and the rest of us are there in Scotland.

You’ve managed to stay together for a long time. Any special strategies?
Just…apologizing? [laughs]

Is it like blanket apologies or do you seek out certain people? Or do you just wake up everyday and say “I’m sorry”?
It depends. Today was a bit of a [motions to wounds] ‘Do I have to apologize to anybody?’ I was drinking too much, MOGWAI was here last night and we were out. I woke up this morning and [affects morning after voice] ‘Oh no…What happened? My face is sore.’ Turns out I fell over on the stairs.

So you guys have crossed the fifteen-year mark?
Next year will be twenty years.

What’s it like being the old guard, the established band?
It’s pretty weird.

MOGWAI: ‘There was not any expectation that this would be a job.’

Did you expect that?
No. It was just nice that someone was letting us make seven inches and then an album. There was not any expectation that this would be a job.

What are your thoughts on the recent spate of reunions of bands from the ninedties? SOUNDGARDEN, PAVEMENT, and the PIXIES all went on tour and GRANDADDY reunited for a few shows? What are your thoughts on this?
Sometimes it’s great to see bands either we’ve never seen before or haven’t seen for a long time.  It was great seeing PAVEMENT, and the PIXIES were just amazing. It’s a good thing if you’ve never seen the bands and you like their albums. I guess it’s because of the negotiating on the internet that bands aren’t making money from their back catalogue as much, so they have to earn their money to pay their bills. It seems a bit strange when bands come back and start releasing albums again, that seems pretty weird. But that’s what bands do: make albums.

As a band, MOGWAI curated an All Tomorrow’s Parties in 2009, and you recently created the soundtrack to the French TV program Les Revenants and the score to Zidane: A 21st Century Portrait, about a French footballer.  Barry co-owns a bar here that features music, art and films.   Evidence suggests that MOGWAI is so much more than simply a band, but interested in other cultural arenas. Is that accurate?
It doesn’t seem like they’re different’ it’s just a natural extension of what we do. With the soundtrack stuff, it’s something that is quite easily thought of for instrumental music. But it not’s necessarily a straightforward as a lot of people just presume. When we are asked to do interesting things, we’re happy to go for it.

How is it different, doing a film or TV show score?
Well there’s a lot more collaboration, you have to do what your told. Certainly, historically we’ve been pretty bad at doing things other people tell us to do. [laughs] As we get older we are realizing that it’s just different from making a record.

So are you getting more docile or flexible as you get older?
A little bit more pragmatic. If we want to be involved in interesting projects like that, those projects only exist because someone else has created them.

How did you come up with your song and album titles? How related are they to the music? Tell me about the inspiration for Rave Tapes.
The song and album naming process is not …. difficult for us, but there’s just not really much to think about because it’s instrumental music.  There’s not one person attaching literal or metaphoric meaning to things.

But there are some bands who just name their songs ‘Whatever,’ just to give it a title.
Yeah we kind of do that; usually it’s something that amuses us. Rave Tapes, just sounds kind of funny, referring to those cassette recordings of raves, DJ mixes that people would swap and you could go to shops and buy them.

There’s a nineties reference.
Yeah, it’s something from rave culture. It was from when we were all quiet young, to be involved in taping raves at the time.  Just an amusing phrase.