Hamburg’s Molotow Club isn’t known for having a lot of space or the fanciest air conditioning system, no. It’s a sticky rock and roll club at the end of the famous Reeperbahn and especially during the annual Reeperbahn Festival things heat up even more as the venue is constantly packed with the fluctuating festival audience. On that night in September 2016 a young band from the UK entered the stage, one I never heard of before. Their leading man wore an army muscle shirt and in combination with his freshly shaved head he almost appeared like a football hooligan from the 1990s. The man’s name was Charlie Steen and I will never forget the determined look in his eyes on that night. The band that shared a stage with him went by the name Shame. The following thirty minutes became a rough and sweaty affair with Steen shouting his heart out, spitting into the audience and also initiating a mosh pit on his own. The other lads were quite furious as well, performed as if their life depends on it. It was a triumphant revelation I will never forget because despite the furious energy I already sensed that these were simply great songs. That’s what it might have felt like when people first witnessed Joy Division, Oasis or The Libertines, I thought to myself back then. And I couldn’t help feeling a bit nostalgic as well right next to a level of excitement. Of course, Shame are not fans of a bullshit concept like nostalgia. Thank god! 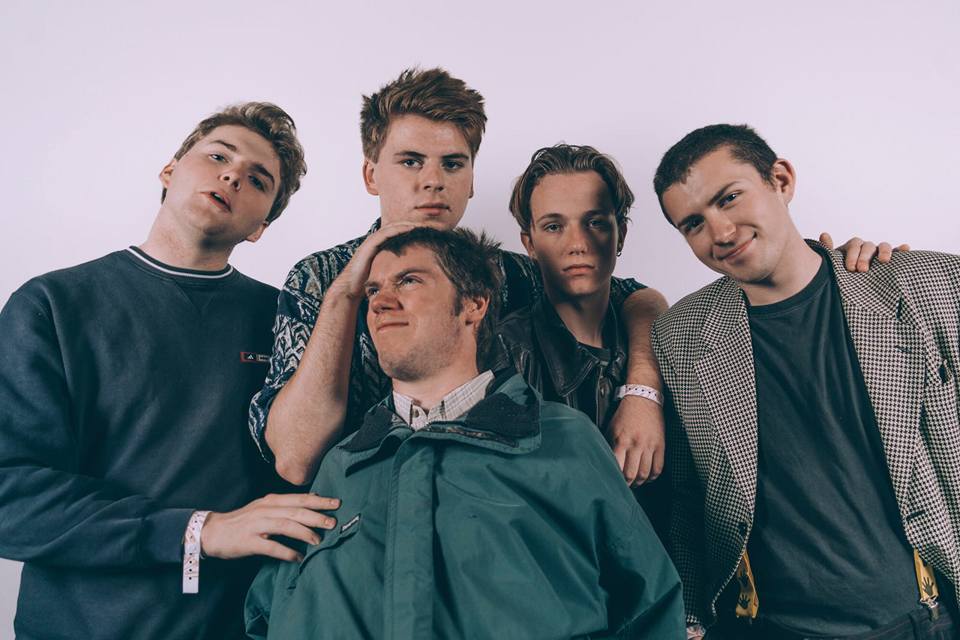 Flash forward, thirteen month later. Shame are about to release their first full-length called Songs Of Praise and the months leading up to it have been a rollercoaster ride for the band from London. ‘Since that Reeperbahn Festival gig I’d like to think we’ve developed as musicians and performers’, guitarist Eddie Green tells me in a quick e-mail exchange ahead of the LP’s release. ‘We’ve played quite literally hundreds of gigs since then so it’s given us time to hone our craft I guess,’ he confirms. Back in late 2016 it was kind of hard to track the band down musically, in the meantime they thankfully released a handful of singles that all transport that furious punk spirit into recorded form. From the more post-punk infected ones like Concrete to the noisy The Lick and the almost catchy pop tune One Rizla – Shame play a variation of well-known British independent rock traditions. Green narrows them down to the following:

‘We draw influence from all over but some collective favourites include The Fall, Eddie Current Suppression Ring and The Stooges to name a few.’

Songs Of Praise arrives at a time when raw British guitar music isn’t the hippest thing to do anymore, especially when it comes to the expression of youthful frustration and anger. Only a little more than a decade earlier a band like Shame would have worked quite well in the wake of groups like Arctic Monkeys, Maximo Park or Babyshambles but to my surprise such groups weren’t exactly inspirations for the Brits as Green reports: ‘Those bands were very ‘of the moment’ but I don’t think we can honestly say we’ve ever drawn any influence from them.’ For Shame specific genre-limitations and labels aren’t as important as they used to be.  They probably won’t start a new British independent rock hype but they stand for a young generation of British artists who are pissed by the politics of their country and all the regressive nonsense. Wolf Alice might combine pop and rock, Skepta and Co. use Grime as their musical weapon while a band like Sleaford Mods are a missing link between punk, indie and rap. Shame perfectly fit to that movement: ‘The UK has always been a pioneer in combining political movements with music,’ Green confirms, ‘so I guess we fit into that in some regard.’ Adding that ‘the climate in the UK at the moment lends itself to the creation of more aggressive music’ and that his band is  part of that notion although he doesn’t consider Shame to be a political band. However, they got an opinion and also recorded a gentle song for (or, well, ‘against’) Theresa May last year. ‘It was more a social commentary than political activism and that’s kind of where that song came from,’ the guitarist says. 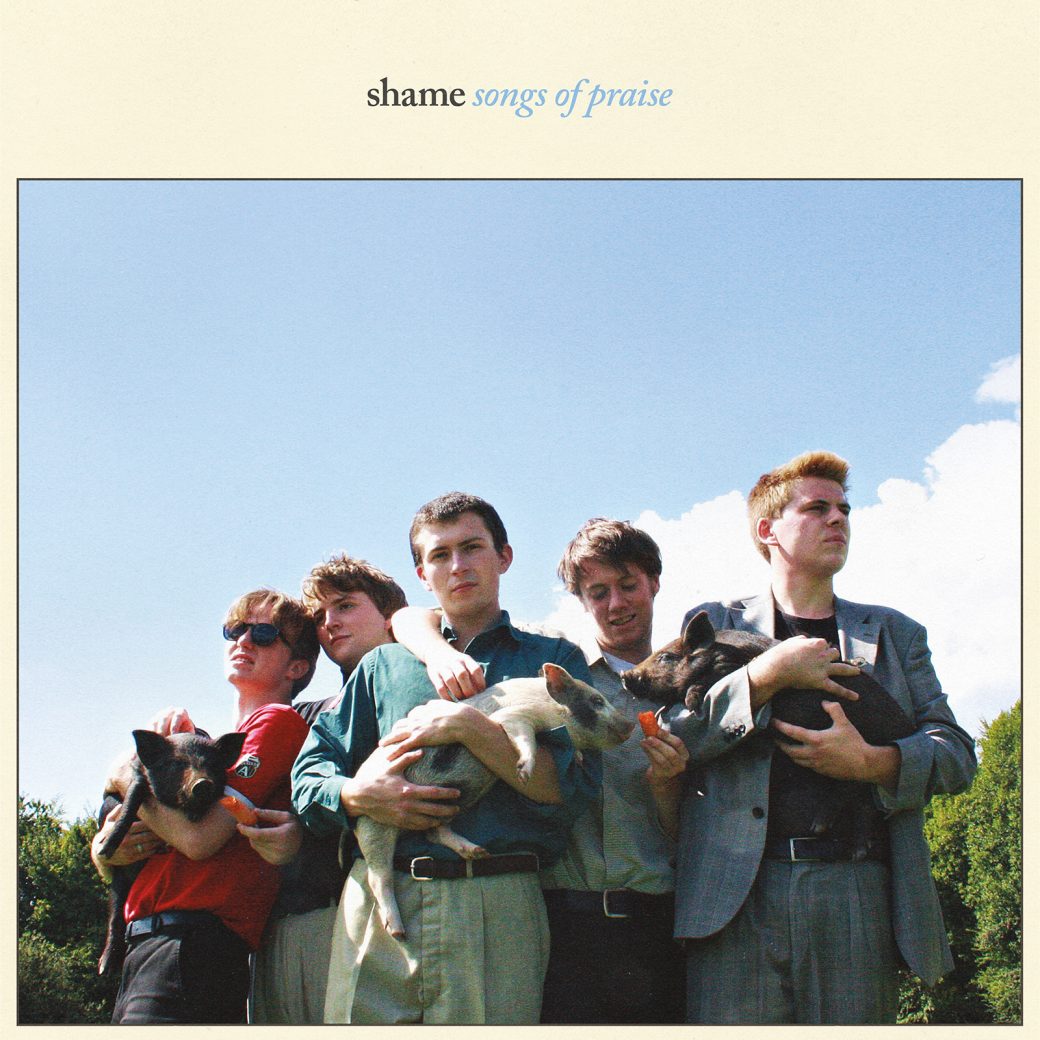 Songs Of Praise became a triumphant first impact, quite possibly the finest British guitar debut album since Whatever People Say I Am, That’s What I’m Not. It’s a beautiful mess, full of raw anger, bittersweet humor, attitude and really good songs. Shame are not even trying to intellectualize their music, it sticks to what British guitar rock was always best at: Capturing the everyday life of the people who are making it. The goal is to show how absurd or ‘surreal’ our current environment is, as Green tells me.  That absurdity also includes forming a guitar rock group when there’s almost zero chances of making a living from it. The guitarist is quite aware of that and warns other young folks:

‘Don’t start a band if you want to make money, if you’ve got any other goals then go for it.’

Shame might got their inspiration from the past but they are a band for the here and now, that much is for sure. Fifteen years ago when things were a bit simpler, the media landscape was still pretty traditional, musical tastes and definitions were way more limited and less individualized, a record like Songs Of Praise might have caused a massive hype. But we entered an age that isn’t made for these universal hypes anymore. For some people Shame might be the long awaited rock and roll saviours, for others just a bunch of uncool ruffians who sound a bit out of date. But within that realization also lies a lot of freedom and these guys will use that to bring their furious temperament to all the stages they can find over the next months. ‘We’re gonna tour until we can’t stand each other anymore’, Eddie Green adds and I couldn’t think of a better statement to end this article. Don’t believe the hype. Screw the hype! But please go see these guys live as long as you can. It could change your life.

Songs Of Praise will be released on January 12 via Dead Oceans.